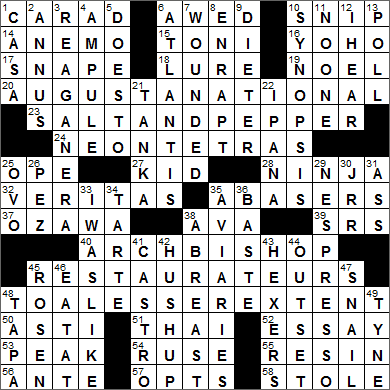 Today’s Wiki-est, Amazonian Googlies
Across
1. Spot for a ride? CAR AD
A car ad might fill an advertising spot.

10. Pinking sound SNIP
Pinking shears are scissors that have sawtooth edges so that they cut in a zigzag pattern. It’s possible that the term “pinking” comes from the carnation flower, which is also called a “pink”. The pink/carnation has flowers with serrated edges that are similar to edges formed by pinking shears.

14. Meteorological prefix ANEMO-
“Anemo-” is a combining form meaning “wind”, coming from “anemos”, the Greek word for “wind”. An example of its use is in the word “anemoscope”, a device that shows the direction of the wind.

15. “United States of Tara” Emmy winner Collette TONI
Toni Collette is a marvelous actress from Australia who really started to garner the public’s attention playing the title role in the 1994 film “Muriel’s Wedding”. She went on to take major roles in films like “Emma” (1996), “The Sixth Sense” (1999), “About a Boy” (2002), all of which are favorites of mine. Collette also played the lead in the excellent Showtime comedy-drama “United States of Tara”.

16. Corsair’s syllables YO HO!
Corsairs were privateers, seamen who were authorized by France to attack and plunder vessels from nations who were at war with the French.

17. Colleague of Charms teacher Flitwick SNAPE
Severus Snape is a character in the Harry Potter novels, played by the wonderful Alan Rickman on the big screen. Snape has the pivotal role of using the Killing Curse on Professor Dumbledore, as an act of mercy.

19. “Bring a Torch, Jeannette, Isabella,” e.g. NOEL
“Noël” is the French word for the Christmas season, ultimately coming from the Latin word for “birth” (natalis). Noel has come to be used as an alternative name for a Christmas carol.

“Bring a Torch, Jeannette, Isabella” is Christmas carol that originated in Provence in the South of France (French title “Un flambeau, Jeannette, Isabelle”). Originating in the 16th century, the piece was written as dance music for French nobility, and only later began to be sung at Christmas. The Christmas tradition is that Jeanette and Isabella are two milkmaids who come across the newborn baby Jesus and run around summoning the villagers of Bethlehem while calling out for a torch.

20. Masters home AUGUSTA NATIONAL
The Augusta National Golf Club in Augusta, Georgia was founded in 1933 by Bobby Jones and Clifford Roberts. Famously, Augusta hosts the Masters Tournament each year. Augusta is very much a private club, and some of its policies have drawn criticism over the years. Prior to 1959, the club had a bylaw requiring that all caddies be African American. There were no African-American club members admitted until 1990, and no women until 2012.

24. Shimmering South American denizens NEON TETRAS
The neon tetra is a freshwater fish, native to parts of South America. The tetra is a very popular aquarium fish and millions are imported into the US every year. Almost all of the imported tetras are farm-raised in Asia and very few come from their native continent.

Thomas Nashe was a playwright and poet active in the Elizabethan era. Nashe’s best-known work is his novel “The Unfortunate Traveller”.

28. Man in black NINJA
The ninjas were around in Japan at the time of the samurai, but were a very different type of warrior. The ninjas were covert operatives, specializing in the use of stealth to accomplish their missions. As they were a secretive cadre they took on a mystical reputation with the public, who believed they had the ability to become invisible or perhaps walk on water.

Harvard University was founded in 1636 as “New College”, the college at New Towne. The school was renamed three years later after John Harvard, a deceased clergyman and who donated books and money.

37. 2000s Vienna State Opera conductor OZAWA
Seiji Ozawa is most famous for his work as music director of the Boston Symphony Orchestra, although he is also the principal conductor of the Vienna State Opera. Ozawa is renowned for wearing a white turtleneck under his dress suit when he conducts, rather than the traditional starched shirt and white tie.

“Justified” is a TV drama that originally aired on FX from 2010 until 2015. It’s about a US Marshall behaving somewhat like a 19th-century lawman, while meting out justice in his hometown in Kentucky. The lead is played by Timothy Olyphant, who also played a lawman in the HBO western series “Deadwood”.

40. Canterbury tales subject ARCHBISHOP
The Archbishop of Canterbury is the leader of the Church of England.

45. Jet Tila and Mario Batali RESTAURATEURS
From the French, a “restaurateur” (without a letter N) owns or manages a “restaurant” (with a letter N).

Jet Tila is a celebrity chef who specializes in Thai and Chinese cooking.

Mario Batali is an American celebrity chef who specializes in Italian cuisine. He is often referred to as “Molto Mario”.

50. Stop on the Turin-Genoa railway ASTI
Asti is in the Piedmont region of northwest Italy. The region is perhaps most famous for its Asti Spumante sparkling white wine.

The Turin-Genoa railway was built between 1845 and 1853. The line crosses the Apennines, which required the construction of the Giovi Tunnel. At the time of construction, the Giovi was the longest tunnel in the world.

51. Pad __ THAI
The delicious dish called Pad Thai is a meld of stir-fried rice noodles with tamarind juice, red chili pepper plus a mix of vegetables and possibly tofu, meat or fish. It is usually topped with crushed peanuts, coriander and lime. The name “Pad Thai” translates as “fried Thai-style”.

55. Myrrh, e.g. RESIN
Frankincense and myrrh are both tree resins, exuded when certain species of tree are damaged. The harvested resins are used to make essentials oils for perfumes, and are also burned to give off a pleasant fragrance.

2. __ mirabilis: wonderful year ANNUS
The Latin phrase “annus mirabilis” translates as “wonderful year”, and is used to describe several years in history in which major events occurred. Examples are 1905, the year in which Albert Einstein published articles announcing many of his remarkable discoveries, and 1776, the so called Liberty Year. The English poet John Dryden first used the phrase in this context in his poem “Annus Mirabilis”, describing the year 1666. The events of 1666, including the Great Fire of London, were calamitous, but Dryden interpreted the the cessation of the those events as a miraculous intervention by God.

3. When Star Wars began REAGAN ERA
One of the positive outcomes of President Reagan’s Strategic Defense Initiative (SDI, also “Star Wars”) was a change in US defense strategy. The new approach was to use missiles to destroy incoming hostile weapons, rather than using missiles to destroy the nation attacking the country. The former doctrine of Mutually Assured Destruction went by the apt acronym of MAD …

4. Shot container AMPULE
An ampule is a sealed vial that is commonly used to hold pharmaceuticals. Ampoules are usually made from glass, and are opened by snapping off the neck of the container.

6. Land down under? ATLANTIS
The legendary city of Atlantis was first referred to in writing by the Greek philosopher Plato. The story is that a navy from Atlantis attempted to invade Athens but failed, and as a result the city of Atlantis sank into the ocean.

21. 31-syllable Japanese poem TANKA
A tanka is a Japanese poem comprising five lines with thirty-one syllables, in the pattern 5-7-5-7-7.

22. “Dandy for your teeth” toothpaste IPANA
Ipana toothpaste was introduced in 1915 and was at the height of its popularity in the forties and fifties. Sales declined in the sixties and the product was withdrawn from the US market in the seventies. Bucky the Beaver was the “spokesman” for Ipana. Bucky the Beaver’s slogan was “Brusha… Brusha… Brusha. Get the New Ipana – it’s dandy for your teeth!”

25. Lacto-__ vegetarian OVO
A lacto-ovo vegetarian is someone who does not consume meat or fish, but does eat eggs (ovo) and dairy (lacto) products.

26. Candy created in Austria PEZ
PEZ is an Austrian brand name for a particular candy sold in a mechanical dispenser. Famously, PEZ dispensers have molded “heads”, and have become very collectible over the years. The list of heads includes historical figures like Betsy Ross and Paul Revere, characters from “Star Wars” and “Star Trek”, and even British royalty like the Duke and Duchess of Cambridge (“William and Kate”). The name PEZ comes from the first, middle and last letters of “Pfefferminz”, the German word for “peppermint”.

29. K-Cup competitor NESPRESSO
A Nespresso machine brews espresso from single-use capsules of ground coffee. The machine was invented by a Nestlé employee in Switzerland in 1976.

A K-Cup is a single-portion cup of coffee, tea or hot chocolate in which the beverage is prepared in situ. K-Cup packs are used with brewing machines made by Keurig, a manufacturer of coffee brewers based in Reading, Massachusetts. Personally, I’ve never seen one …

30. Fantasy lit initials JRR
J. R. R. (John Ronald Reuel) Tolkien was an English author, best known by far for his fantasy novels “The Hobbit” and “The Lord of the Rings”. Although Tolkien lived in England and was a professor at Oxford, he served for many years as an external examiner at my old school, University College Dublin in Ireland.

35. Where to see some kites AVIARIES
Kites are birds of prey that feed mainly on carrion.

43. Spelling experts? HEXERS
“Hexen” is a German word meaning “to practice witchcraft”. The use of the word “hex” in English started with the Pennsylvania Dutch in the early 1800s.

45. 1953 A.L. MVP Al ROSEN
Al Rosen is a former Major League baseball player who played his whole career with the Cleveland Indians. As one of the best all-time players of the game with a Jewish heritage, his fans gave him the nickname “the Hebrew Hammer”.

47. Mail lead-in SNAIL
“Snail mail” is regular mail delivered by the postal service. The term “snail mail” arose as email gained in popularity, and is a reference to the difference in speed between email and paper mail.

48. Spanish morsel TAPA
“Tapa” is the Spanish word for “lid”, and there is no clear rationale for why this word came to be used for an appetizer. There are lots of explanations cited, all of which seem to involve the temporary covering of one’s glass of wine with a plate or item of food to either preserve the wine or give one extra space at the table.