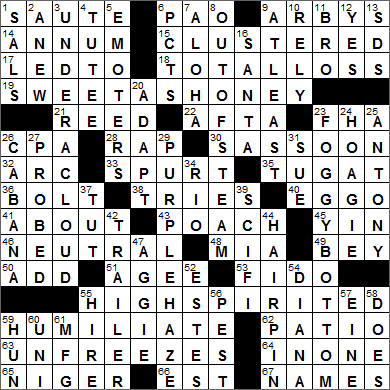 CROSSWORD SETTER: Steven J. St. John
THEME: Foggy Bottom … each of themed answers today is in the down-direction, and ends with something similar to FOG. Each has a FOGGY BOTTOM:

3D. Suspected of misdeeds UNDER A CLOUD
8D. Spent OUT OF STEAM
29D. Psychedelic rock classic of 1967 PURPLE HAZE

Today’s Wiki-est, Amazonian Googlies
Across
1. Fry SAUTE
“Sauté” is a French word. The literal translation from the French is “jumped” or “bounced”, a reference to the tossing of food while cooking it in a frying pan.

6. Kung __ chicken PAO
Sichuan (also Szechuan) is a province in southwest China. Sichuan is noted for its cuisine, which is hot and spicy as it uses plenty of garlic, chili peppers and the Sichuan peppercorn. A famous Szechuan dish in the US is Kung Pao chicken or shrimp.

9. Market Fresh sandwich and salad seller ARBY’S
The Arby’s chain of fast food restaurants was founded in 1964 by two brothers, Forrest and Leroy Raffel. The name “Arby’s” is a homonym of “RB’s”, standing for “Raffel Brothers”.

14. Time of old Rome ANNUM
The Latin word for year is “annus”. We often see it used in Latin phrases, but usually with a different spelling. For example in “anno Domini”, the “anno” is the ablative case of “annus” as the phrase means “in the year of the Lord”. Another example is “per annum”, in which “annum” is the accusative case as the literal translation of the phrase is “during the year”.

22. Mennen lotion AFTA
Afta is an aftershave in the Mennen range of products that is owned by Colgate-Palmolive.

23. Govt. mtge. insurer FHA
The Federal Housing Administration (FHA) was set up in 1934 to insure loans made lenders for the building and purchase of homes. The FHA was created in response to the bank failures of the Great Depression, with the intent of creating a more favorable environment for lending.

28. Hammer number RAP
Rapper MC Hammer (aka Hammer and Hammertime) was born Stanley Kirk Burrell, and was very popular in the 80s and 90s. Being around that early, MC Hammer is considered to be one of the forefathers of rap. Nowadays, MC Hammer is a preacher, and uses the initials MC to stand for “Man of Christ”.

30. Big name in hairstyling SASSOON
Vidal Sassoon was a hairdresser and businessman from London, England. Sassoon is credited with “liberating” women from the hair salon by popularizing hairstyles that one could “wash and wear”.

32. Hyperbola part ARC
A hyperbola is a curve in a plane, a curve with two parts that are mirror images of each other.

40. Maple syrup target EGGO
Eggo is the brand name of a line of frozen waffles made by Kellogg’s. When they were introduced in the 1930s, the name “Eggo” was chosen to promote the “egginess” of the batter. “Eggo” replaced the original name chosen, which was “Froffles”, created by melding “frozen” and “waffles”.

48. Farrow of film MIA
Mia Farrow is an energetic, award-winning actress who really hasn’t looked back in her career since her first leading role, in “Rosemary’s Baby” back in 1968. Her on-screen celebrity is matched by the interest created by her personal life. Her first husband was Frank Sinatra, a wedding in 1966 that received a lot of attention partly due to the couple’s age difference (she was 21, he was 50). Her second husband was almost as famous, the magnificent musician André Previn. Farrow then moved in with Woody Allen, a relationship that famously fell apart when Farrow discovered that Allen was having a sexual relationship with Soon-Yi, one of her adopted daughters from the marriage with André Previn.

49. Ottoman title BEY
“Bey” is a Turkish title for a chieftain. In the days of the Ottoman Empire, the term “bey” was used for many different officials, but traditionally it referred to the leader of a small tribal group. Today “bey” is used very much like “mister”.

62. Place for a Char-Broil PATIO
Char-Broil is a line of barbecue grills that is made by a division of the W. C. Bradley Co. The Bradley Co. also owns the brands Rhino, Tiki and Thermos.

64. Hole __ IN ONE
One well-documented hole-in-one was during a round of the British Open in 1973. American golfer Gene Sarazen achieved the feat that day, at the age of 71. A less well-documented series of holes-in-one was reported by the North Korean press in a story about the Korean leader Kim Jong-il. The report was that Kim Jong-il scored 11 holes-in-one in his first and only round of golf.

65. Third-longest African river NIGER
The principal river in western Africa is the Niger, running 2,600 miles through the continent. The river has a boomerang shape, taking a sharp turn around the the ancient city of Timbuktu in Mali.

5. Hams EMOTERS
The word “ham”, describing a performer who overacts, is apparently a shortened form of “hamfatter” and dates back to the late 1800s. “Hamfatter” comes from a song in old minstrel shows called “The Ham-Fat Man”. It seems that a poorly performing actor was deemed to have the “acting” qualities of a minstrel made up in blackface.

6. First-serve figs. PCTS
The first-serve percentage is a statistic measured in tennis.

7. Island reception ALOHA
The Hawaiian word “Aloha” has many meanings in English: affection, love, peace, compassion and mercy. More recently “aloha” has come to mean “hello” and “goodbye”, but only since the mid-1800s.

13. ’60s protest org. SDS
Students for a Democratic Society (SDS) was an activist group in the sixties. The SDS organized the largest student strike in the history of the United States on 26 April 1968, with about a million students staying away from class that day. The “Students for a Democratic Society” name was revived in 2006 with the foundation of a new US-based student organization with left wing beliefs. Today’s SDS was founded by a pair of high school students from Greenwich Village, New York.

23. State Department neighborhood … and what 3-, 8- and 29-Down all have? FOGGY BOTTOM
Foggy Bottom is a historic neighborhood in Washington, D.C., home to the US State Department and George Washington University. Situated beside the Potomac River, the area is said to have gotten its name as the low-lying location is susceptible to concentrations of fog.

24. Philly trademark HOAGIE
“Hoagy” is another name for a submarine sandwich. The term “hoagy” (or hoagie) originated in Philadelphia, apparently introduced by Italians working in the shipyards during WWI. The shipyards were located on Hog Island, and the sandwich was first called the Hog Island, which morphed into the hoagy.

Friends, Romans, countrymen, lend me your ears;
I come to bury Caesar, not to praise him.

26. Changing place CABANA
Our word “cabana” comes from the Spanish “cabaña”, the word for a small hut or a cabin.

29. Psychedelic rock classic of 1967 PURPLE HAZE
“Purple Haze” is a 1967 song written and recorded by Jimi Hendrix that has been described as a “psychedelic drug song of the sixties”. In fact, the term “purple haze” came to refer to LSD. Having said that, Hendrix denied any relation of the lyrics to drugs at all.

34. Brazilian-themed Vegas hotel, with “The” RIO
The Rio casino in Las Vegas was opened in 1990, originally targeting the local population as it is located off the famous Strip where most of the tourists hang out. Famously, the Rio opened up the adults-only Sapphire Pool in 2008, a pay-to-enter (only men paid) topless pool club that featured music and dancers. A year later the Sapphire Pool was closed down after there were eleven arrests for drugs and prostitution offences during an undercover police operation.

39. Nebula Award genre SCI-FI
The best works of science fiction and fantasy published each year are recognized annually by the Nebula Awards. The first Nebulas were awarded in 1966.

42. One may begin with “In a world … ” TRAILER
The term “trailer” came about in the film industry as advertisements for upcoming features were originally shown at the end of a movie being screened. This practise quickly fell out of favor as movie patrons usually left without paying much attention to the trailers. So, the trailers were moved to the beginning of the show, and the term “trailer” persisted.

47. Longhorn rival AGGIE
Texas A&M is the seventh largest university in the country, and was the first public higher education institute in the state when it accepted its first students in 1876. The full name of the school was the Agricultural and Mechanical College of Texas and its primary mission used to be the education of males in the techniques of farming and military warfare. That’s quite a combination! Because of the agricultural connection, the college’s sports teams use the moniker “Aggies”.

54. 1997 Elton dedicatee DIANA
Diana, Princess of Wales was a close friend of the English singer Elton John. At the princess’s funeral, Elton John performed a revised version of his song “Candle in the Wind” to honor his departed friend. The song was released as a single under the name “Candle in the Wind 1997” It became the fastest and best-selling song of all time, and remains the only single ever to be “certified diamond” in the US.

55. “Spenser: For __” HIRE
Robert B. Parker wrote a series of detective novels featuring a Boston private eye named Spenser. The series of novels was continued after Parker’s death by Ace Atkins. The character also features in a TV show called “Spenser: For HIre”, as well as series of “Spenser” films based on the original novels. Spenser was played by Robert Urich on the weekly show, and by Joe Mantegna in three TV movies. We never learn Spenser’s given name.

59. Fifth-century conqueror HUN
The Huns were a nomadic people who originated in Eastern Europe in the 4th century. Under the command of Attila the Hun they developed a unified empire that stretched from modern-day Germany across to the steppes of Central Asia. The whole of the Hunnic Empire collapsed within a year of Attila’s death in 453 AD.

60. Athlete’s wear, for short UNI
A unitard is like a leotard, except that it has long legs and sometime long sleeves. It wouldn’t be a good look for me …

The garment known as a leotard was named for French trapeze artist Jules Léotard. Léotard wore such a garment when he was performing.

61. It increases during plant growth: Abbr. MFG
That would be a manufacturing (mfg.) plant.