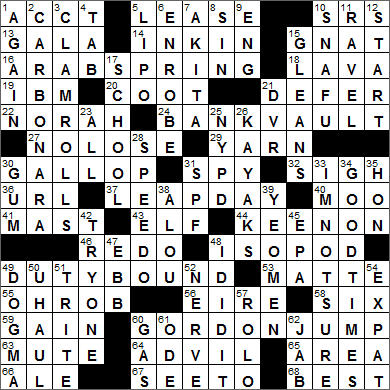 CROSSWORD SETTER: C.C. Burnikel
THEME: Leap Day … in honor of LEAP DAY, each of today’s themed answers ends with a synonym of LEAP:

Today’s Wiki-est, Amazonian Googlies
Across
10. Many GRE takers SRS
Passing the Graduate Record Examination (GRE) is usually a requirement for entry into graduate school here in the US.

16. Mideast protest movement that began in 2010 ARAB SPRING
The term “Arab Spring” has been applied to the wave of protests, riots and civil wars that impacted the Arab world for 2010 to 2012. The uprisings were sparked by the Tunisian Revolution at the end of 2010 that led to the ouster of the longtime president and the institution of democratic elections. The period of instability that followed in some Arab League countries has been dubbed the “Arab Winter”.

19. Cloud computing giant IBM
IBM was founded as the Tabulating Machine Company in 1896. The company changed its name to the Computing Tabulating Recording Corporation (CTR) in 1911 and was listed on the New York Stock Exchange in 1916. The name of International Business Machines (IBM) was given first to the company’s Canadian subsidiary, and then its South American subsidiary. In 1924, it was decided to adopt the International Business Machines name for the whole company. Good choice …

As I understand it, cloud computing negates the need for most applications to run on one’s computer, and instead one accesses those applications on remote servers on the Internet. I do it all the time. I write up this blog using applications that reside not on my laptop here, but in “the cloud”. That means that if my laptop crashes, I go grab someone else’s computer and just carry on, no harm done!

22. “Little Broken Hearts” singer Jones NORAH
The beguiling Norah Jones is the daughter of famous sitar virtuoso Ravi Shankar, and is one of my favorite singers. If you haven’t heard Jones sing her song “Come Away with Me”, you just haven’t lived …

24. Cash cache BANK VAULT
A “cache” is a secret supply. We imported the term into English from French Canadian trappers in the 17th century. Back then, “cache” was as slang term for a “hiding place for stores”, derived from the French verb “cacher” meaning “to hide”.

29. Tall tale YARN
The phrase “to spin a yarn”, meaning “to tell a tall tale”, originated in the early 1800s with seamen. The idea was that sailors would tell stories to each other while engaged in mindless work such as twisting yarn.

31. Bond or Bourne SPY
James Bond is the creation of the writer Ian Fleming. Fleming “stole” the James Bond name from an American ornithologist. The number 007 was “stolen” from the real-life, 16th century English spy called John Dee. Dee would sign his reports to Queen Elizabeth I with a stylized “007” to indicate that the reports were for “her eyes only”.

43. Will Ferrell holiday movie ELF
“Elf” is a comedy movie released for the 2003 Christmas season. “Elf” was directed by Jon Favreau and stars Will Ferrell in the title role with James Caan supporting. It’s all about one of Santa’s elves who finds out he is human and goes to meet his father in New York City. The film was adapted for the stage as a musical that premiered in 2010.

48. 14-legged crustacean ISOPOD
Isopods are small crustaceans (meaning they have exoskeletons), with seven pairs of legs. Examples would be woodlice and pill bugs. The name “isopod” comes from the Greek “iso” (same) and “pod” (foot). All isopods have seven pairs of jointed limbs.

53. Dull finish MATTE
“Matte”, meaning flat and lusterless, comes from the Old French word “mat” meaning beaten down and withered. In turn, the French “mat” comes from the Latin “maddus”, meaning “maudlin with drink”. Sometimes I wonder about these derivations …

56. Dubliner’s land EIRE
The city of Dublin, the capital of Ireland, is known as Baile Átha Cliath in Irish (“town of the hurdled ford”). The English name “Dublin” is an anglicized form of the older Irish name for the city “Dubh Linn”, meaning “black pool”.

58. Golfer’s double bogey, usually SIX
The term “Bogey” originated at the Great Yarmouth Golf Club in England in 1890, and was used to indicate a total round that was one-over-par (and not one-over-par on a particular hole, as it is today). The name Bogey came from a music hall song of the time “Here Comes the Bogey Man”. In the following years it became popular for players trying to stay at par to be “playing against Colonel Bogey”. Then, during WWI, the marching tune “Colonel Bogey” was written and named after the golfing term. If you don’t recognize the name of the tune, it’s the one that’s whistled by the soldiers marching in the great movie “The Bridge on the River Kwai”.

66. Ginger __ ALE
The brand most closely associated with ginger ale is Canada Dry. “Canada Dry Pale Ginger Ale” was first formulated in 1904 by a Canadian chemist called John McLoughlin from Ontario. Prohibition in the United States helped sales of the drink as it was particularly effective in masking the taste of illegally-produced homemade liquor.

Down
1. “Encore!” AGAIN!
“Encore” is French for “again, one more time”, and is a shout that an audience member will make here in North America to request another song, say. But, the term is not used this way in France. Rather, the audience will shout “Bis!”, which is the Italian for “twice!”

2. Rich pasta dish CARBONARA
The “carbonara” pasta dish includes a sauce made with eggs, cheese, bacon and black pepper. Apparently, the name of the dish is derived from “carbonaro”, the Italian for “charcoal burner”. One suggestion is that it was first made for Italian charcoal workers in the mid-1900s.

4. It’s picked up in bars TAB
When we “run a tab” at a bar say, we are “running a tabulation”, a listing of what we owe. Such a use of “tab” is American slang that originated in the 1880s.

5. Cosmetic surg. option LIPO
Liposuction (lipo) dates back to the 1920s when it was developed by a surgeon in France. However, the procedure quickly lost favor when a French model developed gangrene after surgery. As a result it wasn’t until the mid-seventies that modern liposuction took off, after being popularized by two Italian-American surgeons in Rome.

6. Dress like Judge Judy ENROBE
Judge Judy of television fame is actually Judith Sheindlin, a retired family court judge from New York. Ms. Sheindlin reportedly earns $47 million per year for “Judge Judy”. That’s a tad more than she was earning on the “real” bench, I think, and it makes her the highest-earning personality on television by a long shot.

7. Curly-tailed guard dog AKITA
The Akita breed of dog is named for its point of origin, the Akita Prefecture in Japan. When Helen Keller visited Japan in 1937, she asked for and was given an Akita breed of dog, with the name of Kamikaze-go. Sadly, the dog died within a year from distemper. The following year the Japanese government officially presented Keller with a replacement dog. Supposedly Keller’s dogs were the first members of the breed to be introduced into the US.

9. An official lang. of Hong Kong ENG
Hong Kong first became part of the British Empire after the First Opium War in 1842. In 1898, Britain signed a 99-year lease to retain control of Hong Kong. That control ended 99 years later in 1997 with a formal transfer of sovereignty back to China.

10. Big mess SNAFU
SNAFU is an acronym standing for Situation Normal: All Fouled Up (well, that’s the “polite” version!). As one might imagine, the term developed in the US Army, during WWII.

11. “Bolero” composer RAVEL
Maurice Ravel was a great French composer of the Romantic Era. His most famous piece of music by far is his “Bolero”, the success of which he found somewhat irksome as he thought it to be a trivial work. Personally though, I love minimalism and simplicity …

21. TiVo, for one DVR
TiVo was introduced in 1999 and was the world’s first commercially successful DVR (Digital Video Recorder).

28. Swim team swimsuit SPEEDO
Speedo brand swimwear was first produced in Australia in 1928, by a hosiery company that wanted to diversify. The brand name was chosen after a slogan competition among employees was won by “Speed on in your Speedos”. It was a long time ago, I guess …

30. Orbit, e.g. GUM
Orbit is a sugarless gum made by Wrigley’s. Orbit was first introduced during WWII, but was taken off the shelves in the 1980s when there was a concern that the gum’s sweetener was carcinogenic. Orbit was relaunched in 2001.

31. Sunscreen letters SPF
In theory, the sun protection factor (SPF) is a calibrated measure of the effectiveness of a sunscreen in protecting the skin from harmful UV rays. The idea is that if you wear a lotion with say SPF 20, then it takes 20 times as much UV radiation to cause the skin to burn than it would take without protection. I say just stay out of the sun …

38. Baseball’s Felipe or Moises ALOU
Moises Alou played major league baseball, as did his father Felipe and his uncle Matty.

39. Naval petty officers YEOMEN
In the US Navy, a yeoman is tasked with administrative and clerical work. In fact the position of yeoman is the oldest rating in the navy. You’ll also see a lot of yeomen in the background on “Star Trek”.

49. Religious doctrine DOGMA
A dogma is a set of beliefs, with the plural being “dogmata” (or “dogmas”, if you’re not a pedant like me!)

50. Ryder rival U-HAUL
The U-Haul company was started by married couple Leonard Shoen and Anna Mary Carty in Ridgefield, Washington in 1945. The Shoens used $5,000 of seed money to build trailers in their garage, and then cleverly recruited gas station owners as franchisees with whom they would split the rental revenue. There are now about 15,000 U-Haul dealers across the country.

57. Chewy caramel candy ROLO
Rolo was a hugely popular chocolate candy in Ireland when I was growing up. Rolo was introduced in the thirties in the UK, and is produced under license in the US by Hershey. I was a little disappointed when I had my first taste of the American version as the center is very hard and chewy. The recipe used on the other side of the Atlantic calls for a soft gooey center.