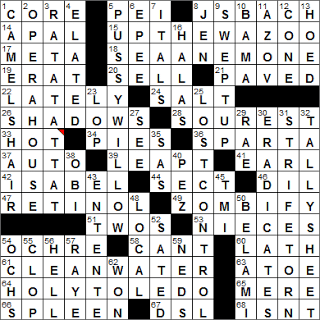 Today’s Wiki-est, Amazonian Googlies
Across
5. JFK Library architect PEI
The John F. Kennedy Presidential Library is a splendid structure located right beside the Boston campus of the University of Massachusetts. President Kennedy chose the location for his library just one week before he was assassinated. The library itself was designed by architect I. M. Pei.

8. “The Well-Tempered Clavier” composer JS BACH
J. S. Bach composed a set of 24 preludes and fugues published as a book in 1722, intended to be used as exercises for students of music. He composed another set of 24 in 1742, and the whole collection is today known as the “Well-Tempered Clavier”, the title of the original book. A “clavier” is a keyboard of a musical instrument.

15. In abundance, in slang UP THE WAZOO
The slang term “up the wazoo” means to have plenty. It’s pretty vulgar slang and is a specific anatomical reference so I don’t think it belongs in the crossword myself …

17. Data lead-in META-
“Metadata” is usually defined as “data about data”. The classic example is the card catalog of a library. The catalog is a set of data about a collection of books. Each entry in the catalog is data about a specific publication.

18. Flowerlike marine creature SEA ANEMONE
The name “anemone” means “daughter of the wind” in Greek, and at one time it was believed that the wind was what actually caused the flower to bloom. The sea anemone is named for the terrestrial plant even though it isn’t a plant at all. The sea anemone is a predatory animal found on the ocean floor.

20. Bear’s call SELL!
The terms “bull” and “bear” markets come from the way in which each animal attacks. A bull thrusts his horns upwards (an “up” market), whereas a bear swipes with his paws downward (a “down” market).

34. Ammo for Moe PIES
Moe Howard, of the Three Stooges, was an expert at tossing a pie in someone’s ace.

36. Peloponnesian War side SPARTA
Sparta was a city-state in ancient Greece, famous for her military might. Spartan children had a tough upbringing, and newborn babies were bathed in wine to see if the child was strong enough to survive. Every child was presented to a council of elders that decided if the baby was suitable for rearing. Those children deemed too puny were executed by tossing them into a chasm. We’ve been using the term “spartan” to describe something self-disciplined or austere since the 1600s.

41. “Downton Abbey” title EARL
In the incredibly successful period drama “Downton Abbey”, the patriarch of the family living at Downton is Robert Crawley, the Earl of Grantham or Lord Grantham. The character is played by Hugh Bonneville. Lord Grantham married American Cora Levinson (played by Elizabeth McGovern. Lord and Lady Grantham had three daughters, and no son. The lack of a male heir implied that the Grantham estate would pass to a male cousin, and out of the immediate family. The Grantham daughters are Lady Mary (played by Michelle Dockery), Lady Edith (played by Laura Carmichael) and Lady Sybil (played by Jessica Brown Findlay). Lady Sybil had the audacity to marry the family chauffeur, an Irish nationalist. The shame of it all …

42. “City of the Beasts” author Allende ISABEL
Isabel Allende is a Chilean writer, apparently the world’s most widely-read, Spanish-language author. Isabel is related to Salvador Allende, the ex-President of Chile.

47. Vitamin A form RETINOL
Retinol is a form of vitamin A. Retinol helps keep skin healthy.

49. Infect with the T-virus, in “Resident Evil” films ZOMBIFY
A zombie is a corpse that has been brought back to life by some mystical means. Our modern use of the term largely stems from the undead creatures featured in the 1968 horror movie called “Night of the Living Dead”. Now that film, I haven’t seen and probably never will …

“Resident Evil” is a whole media franchise spawned from a video game that was launched in 1996. Now there are films, comic books, novels and more games. The series originated in Japan, although over the series goes by the name of “Biohazard”.

53. Melody and Millie, to Minnie Mouse NIECES
Minnie Mouse is the son of farmer Marcus Mouse. Two of her grandparents are Marshal Mouse and Matilda Mouse. Minnie also has an Uncle Mortimer Mouse, as well as twin nieces Millie and Melody Mouse. Minnie’s boyfriend is Mickey Mouse.

54. Earth pigment OCHRE
“Ochre” is often spelled “ocher” in the US (it’s “ochre” where I come from). Ocher is a light, yellowy-brown color, although variations of the pigment are possible such as red ocher and purple ocher.

58. Jargon CANT
“Cant” is insincere language, or the language associated with a particularly group. Back in the 1600s, the term described the whining of beggars.

60. Wood strip LATH
The words “lath” and “lattice” have the same root in Old French. Laths are thin strips of wood that are nailed across a frame forming a backing to which plaster can be applied to finish a wall. The term is also used for the main elements in a trellis, or the lengths of wood in a roof to which shingles are nailed.

61. Focus of 1972 environmental legislation CLEAN WATER
The main legislation governing water pollution in the US is the Clean Water Act (CWA), which became law in 1972.

64. “Yikes!” HOLY TOLEDO!
The origin of the term “Holy Toledo!” is much debated. My favorite story is that it comes from the days of Vaudeville. Back then the week before Easter, known as Holy Week, was the worst week at the box office. Old Vaudeville entertainers used to quip that any week in Toledo was Holy Week, that ticket sales were always bad there. They referred to the city as “Holy Toledo”.

67. High-speed letters DSL
The abbreviation “DSL” originally stood for Digital Subscriber Loop, but is now accepted to mean (Asymmetric) Digital Subscriber Line. DSL is the technology that allows Internet service be delivered down the same telephone line as voice service, by separating the two into different frequency signals.

Down
1. Clothing material for John the Baptist CAMEL’S HAIR
According to the Gospel of Matthew in the King James Bible:

And the same John (the Baptist) had his raiment
of camel’s hair, and a leathern
girdle about his loins; and his
meat was locusts and wild honey.

John the Baptist is regarded by some Christians as the forerunner of Jesus. Early in his life, Jesus was a disciple or follower of John, and is was John who baptized Jesus.

5. Catkin bearer PUSSY WILLOW
Pussy Willow is the name given to small willow and sallow shrubs, but only when their furry catkins are young in early spring. The flowering shoots of pussy willow are used as substitutes for palm branches on Palm Sunday in regions too far north for palms to grow.

6. Near-pointless swordplay? EPEE
The épée that is used in today’s sport fencing is derived from the old French dueling sword. In fact, the the sport of épée fencing is very similar to dueling of the 19th century. The word “épée” translates from French as “sword”.

8. Brad’s ex JEN
Jennifer Aniston won a 2002 Emmy for playing Rachel on the great sitcom “Friends”. Jennifer’s parents are both actors, and her godfather is the actor Telly Savalas.

Brad Pitt’s first major role was the cowboy hitchhiker in the 1991’s “Thelma and Louise”. Pitt’s life offscreen garners as much attention as his work onscreen, it seems. The tabloids revel in the series of high-profile relationships in which he has been involved. He was engaged to Gwyneth Paltrow for a while, married to Jennifer Aniston, and he now lives with Angelina Jolie.

10. 2016 College Football Playoff champ BAMA
The athletic teams of the University of Alabama (“Bama”) are nicknamed the Crimson Tide, a reference to the team colors of crimson and white.

11. Sea of __, south of Ukraine AZOV
The Sea of Azov lies east of the Crimean Peninsula and is linked to the larger Black Sea via the narrow Strait of Kerch. The Sea of Azov is the shallowest sea in the world, with the depth never going above forty-six feet.

16. Immortal Bears coach HALAS
The NFL’s George Stanley Halas, Sr. was nicknamed “Papa Bear”. He also earned the well-deserved nickname of “Mr Everything” as he was a player, coach, inventor, jurist, producer, philanthropist, philatelist and NFL owner. He led the Chicago Bears from 1921 to 1967.

29. Singer Carly __ Jepsen RAE
Carly Rae Jepsen is a singer/songwriter from Mission, British Columbia. Jepsen got her start on TV’s “Canadian Idol” when she placed third in the show’s fifth season.

32. You can count on it TALLY SHEET
Back in the mid-1600s, a “tally” was a stick marked with notches that tracked how much one owed or paid. The term came from the Latin “talea” meaning “stick, rod”.

35. Flier to Sundsvall SAS
SAS was formerly known as Scandinavian Airlines System and is the flag carrier of three countries: Denmark, Norway and Sweden. SAS is based at Stockholm Arlanda Airport located just north of the Swedish capital.

Sundsvall is a city on the east coast of Sweden, sitting on the Gulf of Bothnia. The city has burned to the ground four times in all, with the last fire in 1888 being the biggest fire in the history of the country. As a result of this last fire, the city was built with buildings made from stone. It’s no wonder then that Sundsvall has the nickname “the Stone City”.

38. Eastern sash OBI
The sash worn as part of traditional Japanese dress is known as an obi. The obi can be tied in what is called a butterfly knot.

40. Loadable confections PEZ
PEZ is an Austrian brand name for a particular candy sold in a mechanical dispenser. Famously, PEZ dispensers have molded “heads”, and have become very collectible over the years. The list of heads includes historical figures like Betsy Ross and Paul Revere, characters from “Star Wars” and “Star Trek”, and even British royalty like the Duke and Duchess of Cambridge (“William and Kate”). The name PEZ comes from the first, middle and last letters of “Pfefferminz”, the German word for “peppermint”.

43. International accord ENTENTE
An “entente cordiale” (sometimes just “entente”) is a friendly understanding, usually between two nations. The term, which translates from French as “cordial agreement”, was first used to describe a set of agreements between the UK and France that were put in place 1904.

48. Subway option LOCAL
Local trains may stop at every station.

50. Guy de Maupassant novel BEL AMI
“Bel Ami” is an 1885 novel by French author Guy de Maupassant. The title translates as “Nice Friend”, although a 1903 translation of the novel is titled “Bel Ami, or, The History of a Scoundrel”.

52. Stuffed SATED
“Sate” is a variant of the older word “satiate”. Both terms can mean either to satisfy an appetite fully, or to eat to excess.

54. “Draft Dodger Rag” folk singer OCHS
Phil Ochs was an American protest singer who was active in the days of the Vietnam War. Sadly, the singer’s mental health declined at the very time the war was winding down. Saigon fell in 1975, and Ochs committed suicide in 1976.

57. Comical Martha RAYE
Martha Raye was a comic actress as well as a singer. Strangely enough, Raye was famous for the size of her mouth, something that she used to her own advantage. As her nickname was “The Big Mouth”, she made a little money appearing in commercials for the Polident denture cleaner in the eighties. Her line was, “So take it from the Big Mouth: new Polident Green gets tough stains clean!”