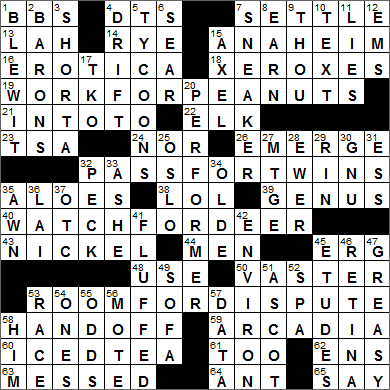 CROSSWORD SETTER: MaryEllen Uthlaut
THEME: Punny Clues … each of today’s themed answers is a common phrase in the form “X FOR Y” but clued in a “punny” way, assuming a different meaning:

19A. *Assist Charles M. Schulz? WORK FOR PEANUTS
32A. *Free ticket given to Target Field players? PASS FOR TWINS
40A. *Timepiece at a stag party? WATCH FOR DEER
53A. *Law office? ROOM FOR DISPUTE

Today’s Wiki-est, Amazonian Googlies
Across
1. Walks, on scorecards BBS
In baseball, a “walk” is recorded as “BB”, standing for “base on balls”.

4. Rehab hurdle DTS
The episodes of delirium that can accompany withdrawal from alcohol are called Delirium Tremens (the DTs). The literal translation of this Latin phrase is “trembling madness”.

15. Ducks’ home ANAHEIM
The Walt Disney Company founded the Mighty Ducks of Anaheim hockey team in 1993, with the franchise’s name being a nod to the 1992 Disney movie called “The Mighty Ducks”. The name was changed to the Anaheim Ducks when Disney sold the team before the 2006-2007 season.

18. Dupes XEROXES
Xerox was founded in 1906 in Rochester, New York and originally made photographic paper and equipment. Real success came for the company in 1959 when it introduced the first plain-paper photocopier. Xerox named Ursula Burns as CEO in 2009, the first African American woman to head up a S&P 100 company. Burn was also the first woman to succeed another female CEO (replacing Anne Mulcahy).

19. *Assist Charles M. Schulz? WORK FOR PEANUTS
Charles M. Schulz was a cartoonist best known for his comic strip “Peanuts” that featured the much-loved characters Charlie Brown and Snoopy. “Peanuts” was so successful, running daily in over 70 countries and 21 languages, that it earned Schulz an estimated 30-40 million dollars annually.

22. Wapiti ELK
The elk (also known as the wapiti) is the one of the largest species of deer in the world, with only the moose being bigger. Early European settlers were familiar with the smaller red deer back in their homelands, so when they saw the “huge” wapiti they assumed it was a moose, and incorrectly gave it the European name for a moose, namely “elk”. The more correct name for the beast is “wapiti”, which means “white rump” in Shawnee. It’s all very confusing …

23. ID checker TSA
The Transportation Security Administration (TSA) was created in 2001, soon after the 9/11 attacks. TSA personnel carry out the baggage and body searches at US airports.

35. Burn soothers ALOES
Aloe vera has a number of alternate names that are descriptive of its efficacy as a medicine. These include the First Aid plant, Wand of Heaven, Silent Healer and Miracle Plant.

38. Modern reaction to a riot? LOL
Laugh out loud (LOL, in text-speak)

43. Important Philippines export NICKEL
Nickel is a silver-white metal. It is thought that the Earth’s core is largely made of a mixture of iron and nickel. The metal’s name comes from German mythology, in which Nickel (equivalent to “Old Nick”) was a mischievous sprite. When German copper miners found nickel-containing ore that resembled ore rich in copper, they blamed Nickel for the fact that they could not extract any copper. According to 2012 numbers, the Philippines have the largest supplies of nickel ore in the world, with Indonesia and Australia coming in second and third.

45. Fraction of a joule ERG
An erg is a unit of mechanical work or energy. It is a small unit, as there are 10 million ergs in one joule. it has been suggested that an erg is about the amount of energy required for a mosquito to take off.

50. “My vegetable love should grow / __ than empires … “: Andrew Marvell VASTER
“To His Coy Mistress” is a mid-17th century love poem by English metaphysical poet and politician Andrew Marvell. The poem is a famous “carpe diem” work, in which he pleads with a woman he loves to refrain from spurning him and to respond to his advances. Marvell wants her to “seize the day”.

My vegetable love should grow
Vaster than empires, and more slow;
A hundred years should go to praise
Thine eyes and on thy forehead gaze;
Two hundred to adore each breast,
But thirty thousand to the rest;
An age at least to every part,
And the last age should show your heart.
For, Lady, you deserve this state,
Nor would I love at lower rate.

59. Home of the god Pan ARCADIA
Pan was the god of shepherds in Greek mythology, and lived in the rustic surroundings of Arcadia. Arcadia was a mountainous region of Ancient Greece, well known for the innocence and contentment of its people who lived a simple, pastoral life. Arcadia has been used ever since as the name of a place offering peace and simplicity.

Down
3. Fan letter? SHORT A
There is a short letter A in the middle of the word “fan”.

5. Industry leaders TYCOONS
Our term “tycoon” meaning powerful business person was originally used by foreigners to describe the shogun of Japan. “Tycoon” was an anglicization of the Japanese “taikun” meaning “great lord or prince”.

7. Converse, e.g. SNEAKER
The Converse shoe company was founded in Malden, Massachusetts in 1908 by one Marquis Mills Converse. The company grew steadily, and introduced its first athletic shoe in 1915, a shoe designed for playing tennis. The Converse brand really took off in 1917 with the launch of a shoe designed especially for basketball, which was called the “All Star”. Basketball player Chuck Taylor really liked the new design and was hired by Converse as a salesman and a spokesman. Taylor suggested a refinement to the design, including a patch on the side to protect the ankle. A star logo (representing the “All-Star” brand) was added to the patch, with Chuck Taylor’s signature being added to the logo as an endorsement in 1923. The Chuck Taylor All-Star became the best selling basketball shoe of all time, and the star became the logo for the Converse company.

9. Quaker pronoun THOU
Members of the Religious Society of Friends are known as “Friends” or “Quakers”. The Christian sect started in England in the 1640s, led by George Fox. The principal tenet at that point was that Christians could have direct experience of Jesus Christ without the mediation of clergy, a reflection of the increasing dissatisfaction with the established church at that time. The term “Quaker” is thought to have been used earlier in reference to foreign religious sects whose followers were given to fits of shaking during religious fervor. Somehow that term became used for members of the Religious Society of Friends.

15. Eponymous skater Paulsen AXEL
An Axel is a forward take-off jump in figure skating. It was first performed by Norwegian Axel Paulsen at the 1882 World Figure Skating championships.

17. Ring decision TKO
In boxing, a knockout (KO) is when one of the fighters can’t get up from the canvas within a specified time, usually 10 seconds. This can be due to fatigue, injury, or the participant may be truly “knocked out”.

25. Home of Norway’s royal family OSLO
The Norwegian monarchs live in the Royal Palace in Oslo, a magnificent 173-room building that was completed in 1849. The current monarch, King Harald V, spent a lot of money on renovations, and the public has been able to tour to the restored palace since 2002.

27. Bank holding: Abbr. MTGE
Our word “mortgage” comes from the Old French “mort gaige” which translated as “dead pledge”. The idea was that a pledge to repay a loan dies when the debt is cleared.

29. __ Tin Tin RIN
The original Rin Tin Tin was a real-life dog, a puppy discovered by a GI in a bombed-out kennel in France during WWI. The soldier named the pup Rin Tin Tin, the same name as a puppet given to American soldiers for luck. On returning to the US, “Rinty” was trained by his owner and was spotted doing tricks by a film producer. Rinty featured in some films, eventually getting his first starring role in 1923 in the silent movie “Where the North Begins”. Legend has it that this first Rin Tin Tin died in the arms of actress Jean Harlow. Not a bad way to go …

30. Shaggy-tailed bovid GNU
A gnu is also known as a wildebeest, and is an antelope native to Africa. “Wildebeest” is actually the Dutch word for “wild beast”.

A bovid is an animal in the family Bovidae. Bovids are ruminants with hoofs and hollow horns, such as cattle, sheep and goats.

31. First of September? ESS
The first letter in the word “September” is a letter S (ess).

32. Lot of trouble? PECK
A “peck” is a dry measure equal to a quarter of a bushel. The term can be used figuratively to mean a considerable quantity in general, as in the phrase “a peck of trouble”.

34. Merrie __ England OLDE
The word “olde” wasn’t actually used much earlier than the 1920s. “Olde” was introduced to give a quaint antique feel to brand names, shop names etc.

35. Plant bristle AWN
“Awn” is the name given to hair or bristle-like structures found in numerous species of plants. In some species, like barley, the awns can contain photosynthetic tissue.

37. Like some stocks, briefly OTC
The NASDAQ trading system created in 1971 is the successor to the over-the-counter (OTC) trading system that was common at the time. OTC trading is done directly between two parties without being facilitated by an exchange.

42. Surround ENVIRON
“Environ” is the French word for “round” or “round about”. We use “environ” as a verb in English, meaning to surround, form a circle around. The related plural noun “environs” is used to mean “surroundings, environment”.

Sergei Rachmaninoff was a Russian pianist and composer active in the late Romantic Era. Rachmaninoff emigrated from Russia in 1917, driven away by the Russian Revolution. He eventually settled in the US where he toured as a pianist for many years. Rachmaninoff’s most famous works are probably his “Piano Concerto No. 1” and his “Rhapsody on a Theme of Paganini”.

46. Light-sensitive layer RETINA
The retina is the tissue that lines the inside of the eye, the tissue that is light-sensitive. There are (mainly) two types of cell in the retina that are sensitive to light, called rods and cones. Rods are cells that best function in very dim light and only provide black-and-white vision. Cones on the other hand function in brighter light and can perceive color.

47. __ spoon GREASY
“Greasy spoon” is a familiar term for a restaurant, usually a diner, that is less than pristine and that serves cheap food.

51. Fancy tie ASCOT
An Ascot tie is a horrible-looking (I think!) wide tie that narrows at the neck, which these days is only really worn at weddings. The tie takes its name from the Royal Ascot horse race at which punters still turn up in formal wear at Ascot Racecourse in England.

53. Derby, perhaps RACE
Our use of the word “derby” to mean a race started in 1780 with the English Derby horse race, which was founded then by the 12th Earl of Derby. Ultimately, the term “derby” derives from the old English shire of “Deorby”, a word meaning “deer village”.

56. Speck MOTE
“Mote” is another word for a speck of dust.

57. It may be mined DATA
The process of data mining is used to extract information from a database and present it in a form that facilitates further use.

58. Objective reference HIM
“Him” is the objective form of the pronoun “he”.