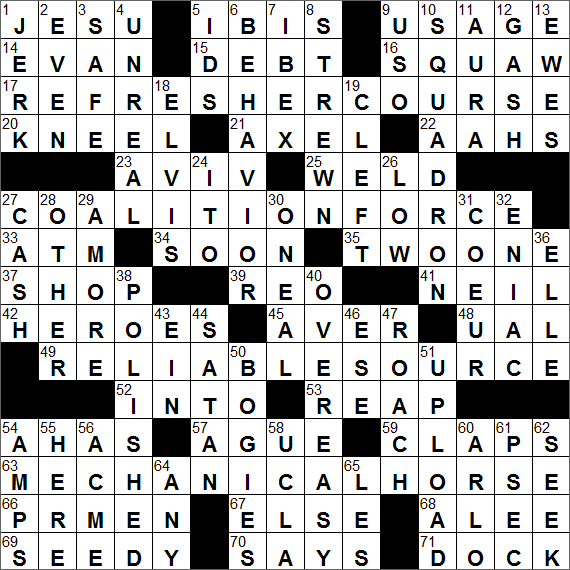 1…Son of God, in a Bach cantata..JESU

Evan Hunter was the adopted name of Salvatore Albert Lombino, an author and screenwriter from New York City. Hunter had a pen name that was perhaps more famous, namely Ed McBain. As McBain he wrote a successful string of crime novels starting in 1956. As Evan Hunter, he is perhaps most famous for his 1954 novel “The Blackboard Jungle”, which was made into a successful film the following year.

An Axel is a forward take-off jump in figure skating. It was first performed by Norwegian Axel Paulsen at the 1882 World Figure Skating championships.

25…Use an acetylene torch on..WELD

Acetylene is one of the simplest hydrocarbons, and has the formula C2H2. About 20% of the acetylene produced in the world is used for oxyacetylene gas welding and cutting.

One keys in a Personal Identification Number (PIN) when using an Automated Teller Machine (ATM).

I saw Neil Diamond in concert about 15 years ago, and I must say he does put on a great show. His voice is cracking a bit, but that didn’t seem to spoil anyone’s enjoyment. I’ve also seen Diamond interviewed a few times on television, and I wouldn’t say he has the most scintillating of personalities.

The highest military decoration awarded for gallantry is the Medal of Honor. The second highest medal is specific to the service, namely the Distinguished Service Cross (Army), the Navy Cross (Navy, Marine Corps and Coast Guard) and the Air Force Cross. The third highest award is the Silver Star.

In the halcyon days of yore, a “soda jerk” was usually a young person whose main job was to serve ice cream sodas in a drugstore. The server would “jerk” the handle on the soda fountain to dispense the soda water, giving the job its distinctive name.

The United Service Organization (USO) was founded in 1941 at the request of FDR “to handle the on-leave recreation of the men in the armed forces”. A USO tour is undertaken by a troupe of entertainers, many of whom are big-name celebrities. A USO tour usually includes troop locations in combat zones.

Judge Lance Ito came in for a lot of criticism for his handling of the O.J. Simpson murder trial. The lead prosecutor in that trial was Marcia Clark, you might recall. I read the book that’s Clark wrote about the trial called “Without a Doubt”, and she pointed out one trait of Judge Ito that I think is quite telling. Ito would almost always refer to the prosecutor as “Marcia”, while addressing the men on both sides of the case as “Mister”.

According to tradition, Rome was founded by the twin brothers Romulus and Remus. The pair had a heated argument about who should be allowed to name the city and Romulus hit Remus with a shovel, killing him. And so, “Rome” was born!

The city, lake and river in Idaho called Coeur d’Alene are all named for the Coeur d’Alene People, Native Americans who lived in the area when it was first explored by French Canadian fur traders. “Coeur d’Alene” translates from French as “heart of an awl”. The Native American people were given this name as they were perceived as shrewd traders by their Canadian counterparts.

The acronym ENIAC stands for Electronic Numerical Integrator and Calculator (although many folks insist that the C was for “Computer”). ENIAC was the first general-purpose electronic computer. It was designed to calculate artillery firing tables, but it ended up being used early on to make calculations necessary for the development of the hydrogen bomb. Given its uses, it’s not surprising to hear that development of ENIAC was funded by the US Army during WWII.

36…Magazine you can read forward and backward?..ELLE

The name “Austria” is a Latin variant of the German name for the country, “Österreich”. “Österreich” itself means “Eastern borderlands”, a reference to the country’s history as a prefecture of neighboring Bavaria to the west.

The Florida city of Tampa has been known as the Big Guava since the seventies. The term is imitative of New York’s “Big Apple”, and refers to the unsuccessful search for the reported wild guava trees that were once hoped to be the basis of a new industry for the area.

Palm Beach is the most easterly town in Florida, and is located on a barrier island. Palm Beach is separated from the cities of West Palm Beach and Lake Worth by the Intracoastal Waterway.

“Bogey” is WWII slang for an unidentified aircraft that is presumed to be hostile.

Victor Hugo’s famous 1862 novel “Les Misérables”, has been translated into English several times. However, the title is usually left in the original French as a successful translation of “les misérables” seems to be elusive. Some suggestions for an English title are “The Wretched”, “The Victims” and “The Dispossessed”.

1…Son of God, in a Bach cantata..JESU

25…Use an acetylene torch on..WELD

53…Bring in from the fields..REAP

36…Magazine you can read forward and backward?..ELLE

40…Flipped during frying, as eggs..OVER EASY