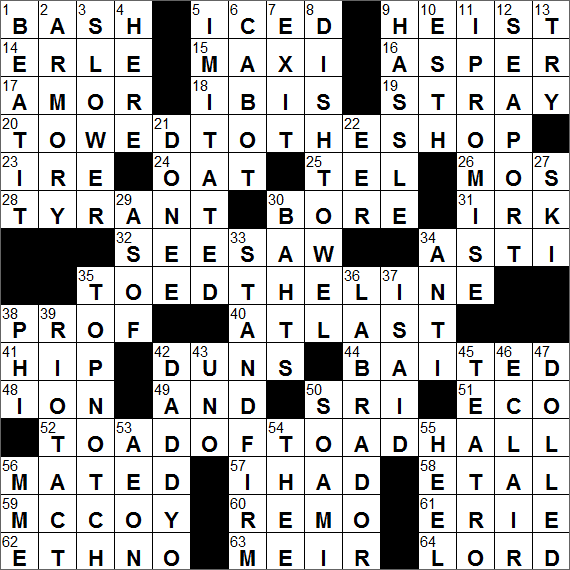 “Hood” is a slang term for “gangster”, a shortening of “hoodlum”.

I must have read all of the Perry Mason books when I was in college. I think they kept me sane when I was facing the pressure of exams. Author Erle Stanley Gardner was himself a lawyer, although he didn’t get into the profession the easy way. Gardner went to law school, but got himself suspended after a month. So, he became a self-taught attorney and opened his own law office in Merced, California. Understandably, he gave up the law once his novels became successful.

The city of Dublin, the capital of Ireland, is known as Baile Átha Cliath in Irish (“town of the hurdled ford”). The English name “Dublin” is an anglicized form of the older Irish name for the city “Dubh Linn”, meaning “black pool”.

The original AT&T Corporation was first known as the American Telephone and Telegraph Company.

Our month of July used to be called “Quintilis” in Ancient Rome. “Quintilis” is Latin for “fifth”, and it was the fifth month of the year back then. After the assassination of Julius Caesar, the Roman Senate renamed Quintilis to Julius, in his honor, which evolved into our “July”. The month of August, originally called “Sextilis” in Latin, was renamed in honor of Augustus.

The idiomatic expression “to toe the line” means “to obey”. The etymology of the phrase is disputed, although it is likely to come from the Royal Navy. Barefooted sailors were required to stand to attention for inspection lined up along the seams for the wooden deck, hence “”toeing the line”.

“To dun” is to insist on payment of a debt. The etymology of the term is unclear, with one suggestion that it dates back to a famous debt collector in London named Joe Dun.

Back in the day, when reciting the alphabet it was common to emphasize that some letters could be used as a word in itself. One would say “A per se A, B, C, D … I per se I, J, K, L … denoting that the letters A and I are also their own words. It was common to add the & symbol at the end of the recitation, as if it were a 27th letter. So the alphabet ended with “X, Y, Z, & (and) per se and”. This “and per se and” statement was slurred to “ampersand”, giving the name that we use today for the & symbol.

52…Milne play about an amphibian..TOAD OF TOAD HALL

59…Doctor on the starship Enterprise..MCCOY

The actor DeForest Kelley is best known for playing Bones McCoy in the original “Star Trek” cast. The show’s creator, Gene Roddenberry, originally offered Kelley the role of Spock, but Kelly refused it and so was given the part of the ship’s medical officer.

The Italian city of San Remo sits on the Mediterranean, right on the border with France. In Italian the city is named Sanremo, just one word, although the spelling of “San Remo” dates back to ancient times.

George Gordon Byron, known simply as “Lord Byron”, was an English poet active in the early 1800s. Byron was equally as famous for his poetry as he was for the wild excesses in his personal life. Byron lived much of that life outside of England, and fought for revolutionaries in both Italy and Greece. He died from a fever contracted while fighting for the Greeks against the Ottomans.

3…Adagio, as compared to allegro..SLOWER

The tempo of a piece of music is usually designated with an Italian word on the score. For example, “grave” is slow and solemn, “andante” is at a walking pace, and “allegro” is fast, quickly and bright.

Sebastian Cabot was an explorer from the Venetian Republic in Italy. Sebastian was the son of the more famous explorer John Cabot.

“Es ist ein Ros entsprungen” is a German Christmas carol, the title of which translates as “Lo, How a Rose E’er Blooming”.

36…Dog believed to have originated in Newfoundland..LABRADOR

The term “beatnik” was coined by journalist Herb Caen in 1958 when he used it to describe the stereotypical young person of the “beat generation” that was oft associated with the writer Jack Kerouac. That stereotypical beatnik would be playing the bongos and rolling his or her own cigarettes. Male beatniks also tended to sport goatees and wear berets.

In my youth I remember being taught a great card game, by a German acquaintance of mine, called Mau Mau. Years later I discovered that Uno is basically the same game, but played with a purpose-printed deck instead of the regular deck of playing cards that’s used for Mau Mau. I hear that Mau Mau is derived from the game called Crazy Eights.

5…Cooled with cubes, as tea..ICED

15…Dress that reaches the ankles..MAXI

20…Brought in for repair, as a disabled car..TOWED TO THE SHOP

41…Joint that may need replacing..HIP

52…Milne play about an amphibian..TOAD OF TOAD HALL

59…Doctor on the starship Enterprise..MCCOY

3…Adagio, as compared to allegro..SLOWER

8…One hanging near the kitchen sink..DISHTOWEL

33…Not give an inch..STAND FIRM

36…Dog believed to have originated in Newfoundland..LABRADOR