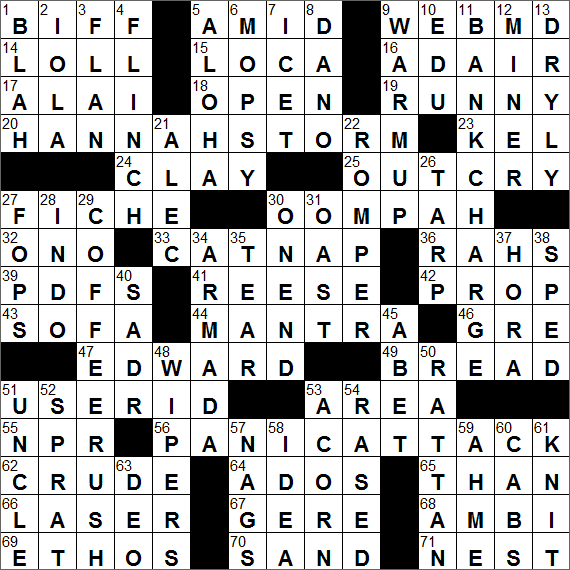 Today’s themed answers end with a synonym of “assault”.

“Death of a Salesman” is a celebrated play by Arthur Miller, first produced in 1949. “Death of a Salesman” won a Pulitzer and several Tony Awards over the years. The “salesman” in the play is the famous character Willy Loman. The play originally opened up on Broadway and ran for 724 performances. The lead role was played by the veteran actor Lee J. Cobb.

9…Site with a “Find a Doctor” section..WEBMD

“Livin’ La Vida Loca” is a 1999 single recorded by Ricky Martin, the title of which translates as “living the crazy life”.

Red Adair was a famous fighter of fires in oil fields, and was a native of Houston, Texas. Adair’s exploits were the inspiration for a 1968 movie called “Hellfighters” starring John Wayne.

Eggs Benedict is a dish traditionally served at an American breakfast or brunch. It usually consists of a halved English muffin topped with ham and poached eggs, all smothered in Hollandaise sauce. The exact origin of the dish is apparently debated, but one story is that it is named for a Wall Street stockbroker called Lemuel Benedict. In 1894 in the Waldorf Hotel, Benedict ordered toast, poached eggs, crispy bacon and Hollandaise sauce as a cure for his hangover. The hotel’s maître d’ Oscar Tschirky was impressed by the dish and added the variant that we use today to the hotel’s menu, naming it for the gentleman who had first ordered it.

The tuba is the lowest pitched of all the brass instruments, and one of the most recent additions to the modern symphony orchestra (usually there is just one tuba included in an orchestral line-up). “Tuba” is the Latin word for “trumpet, horn”.

32…To whom Lennon’s “Woman” is dedicated..ONO

“Woman” is a lovely song written by John Lennon that was recorded in 1980. The song was released in 1981, just a month or so after Lennon was murdered outside his New York apartment building. Lennon wrote the song as an ode to his wife Yoko Ono, and to women in general. He also stated that “Woman” was a grown-up version of “Girl”, a song that he wrote for the Beatles in 1965.

A “mantra” is a word that is used as a focus for the mind while meditating. The term is Sanskrit in origin, and is now used figuratively in English to describe any oft-repeated word or phrase.

The 1993 romantic drama “Sommersby” stars Richard Gere and Jodie Foster. The film is about an imposter who returns after the Civil War and moves in with a woman while claiming to be her husband. The real husband returns, and things get very rancorous. I know it sounds implausible, but the storyline is based on true events that took place in France in the 1500s.

Iola is a city in Southeast Kansas. The city is named for Iola, wife of J. F. Colburn, one of the owners of the land that was chosen as a site for the town in the late 1850s.

5…Hi and bye on Lanai..ALOHA

Danny Williams is a character on the TV show “Hawaii Five-O”, both in the original version that first aired in 1968 and in the remake that was first broadcast in 2010. The original, “Danno” is played by James McArthur. In the remake, Danno is played by Scott Caan, son of Hollywood actor James Caan. Book him, Danno!

13…How deadpan humor is delivered..DRYLY

The term “deadpan”, slang for an impassive expression, comes from dead (expressionless) and pan (slang for “face”).

Sir Alec Guinness played many great roles over a long and distinguished career, but nowadays is best remembered (sadly, I say) for playing the original Obi-Wan Kenobi in “Star Wars”.

“Romper Room” is a television show for children that targets pre-schoolers. The show’s original run in the US lasted from 1953 to 1994.

A natty dresser is one who dresses smartly and neatly.

Caffeine is a naturally occurring stimulant that is found in several plants. The chemical serves as a natural pesticide by paralyzing and killing certain insects that would otherwise feed on the plant. Caffeine is the most-widely consumed psychoactive drug that is consumed by humans across the world.

An oast is a kiln used for drying hops as part of the brewing process. Such a structure might also be called an “oast house”. The term can also apply to a kiln used to dry tobacco.

The most famous Armada was the Spanish fleet that sailed against England in order to overthrow Queen Elizabeth I in 1588. It failed in its mission, partly due to bad weather encountered en route. Ironically, the English mounted a similar naval attack against Spain the following year, and it failed as well.

Sadr City is a suburb of Baghdad, oft in the news these days. Sadr City is named after the deceased Shia leader Mohammad Mohammad Sadeq al-Sadr.

You may have seen the 2008 movie “Flash of Genius”, which outlined the troubles Robert Kearns (played by Greg Kinnear) had in making money from his invention of the intermittent windshield wiper. Well, Mary Anderson developed the original wiper and received a patent in 1903. She didn’t make any money either …

Jack Sprat was a nickname given in the 16th century to people of small stature. Jack featured in a proverb of the day:

Devon is a county in the southwest of England. The county town of Devon is Exeter, and the largest city in the county is Plymouth, the port from which the Mayflower Pilgrims departed.

To do something “ad nauseum” is to do so to a ridiculous degree, to the point of nausea. “Ad nauseum” is the Latin for “to sickness”.

When I was a toddler my mother used to sew a string to connect each of my mittens so that I wouldn’t lose them. The string went up one sleeve, across the back, and down the other sleeve. I probably should do that with my gloves today, and save some money …

“Gloria in excelsis Deo” is a Latin hymn, the title of which translates as “Glory to God in the highest”.

9…Site with a “Find a Doctor” section..WEBMD

32…To whom Lennon’s “Woman” is dedicated..ONO

53…Word with map or code..AREA

5…Hi and bye on Lanai..ALOHA

9…Get ready in the bullpen..WARM UP

13…How deadpan humor is delivered..DRYLY

53…Part of a squirrel’s stash..ACORN