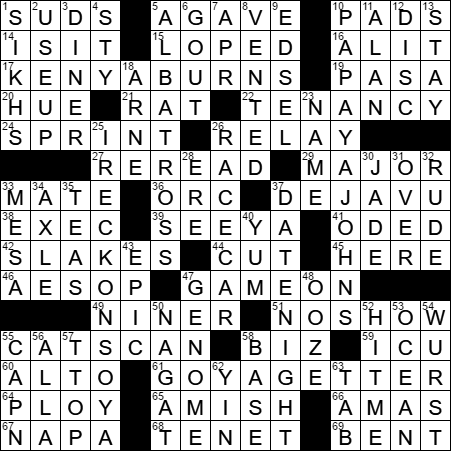 Today’s themed answers are common phrases, but with the letter string YA inserted:

Ken Burns directs and produces epic documentary films that usually make inventive use of archive footage. Recent works are the sensational “The War” (about the US in WWII) and the magnificent “The National Parks: America’s Best Idea”. Burns’ latest offering is 2014’s “The Roosevelts: An Intimate History”.

In Spanish, “que pasa?” literally translates as “what happened?” but is used to mean “how have things been going with you?”.

The name of the premier NASCAR racing series has changed over the years, often as sponsors come and go. The names used have been:

Experts, unlike me, can wax lyrical on the technical differences between major and minor keys and scales. To me, music written in major keys is very strident, often very joyful and “honest”. Music written in minor keys (often my “favorite”) is more feminine, more delicate and often quite sad.

Aesop is remembered today for his famous fables. Aesop lived in Ancient Greece, probably around the sixth century BC. Supposedly he was born a slave, somehow became a free man, but then met with a sorry end. Aesop was sent to the city of Delphi on a diplomatic mission but instead insulted the Delphians. He was tried on a trumped-up charge of stealing from a temple, sentenced to death and was thrown off a cliff.

The 49ers football team in San Francisco takes its name from the gold prospectors who flooded into Northern California around 1849 during the California Gold Rush. These “1849 prospectors” became known as the “49ers”.

A CT (or “CAT”) scan produces (via computer manipulation) a three dimensional image of the inside of an object, usually the human body. It does so by taking a series of two dimensional x-ray images while rotating the camera around the patient. The issue with CT scans is that they use x-rays, and high doses of radiation can be harmful, causing damage that is cumulative over time.

Francisco Goya was a Spanish painter, often called the last of the Old Masters and the first of the moderns. Two of Goya’s most famous works are “The Nude Maja” and “The Clothed Maja”.

The Amish are a group of Christian churches, a subgroup of the Mennonite churches. The Amish church originated in Switzerland and Alsace in 1693 when it was founded by Jakob Ammann. It was Ammann who gave the name to the Amish people. Many Amish people came to Pennsylvania in the 18th century.

An “albatross” is sometimes a metaphor for a psychological burden. This usage comes from the poem “The Rime of the Ancient Mariner” by Samuel Taylor Coleridge. In the story, an albatross is following a ship, a sign of good fortune. Then the “ancient mariner” shoots the albatross with a crossbow, an act that will bring a curse on the ship. The other sailors punish the mariner by forcing him to wear the dead albatross around his neck.

The papaya is the fruit of the Carica papaya, a large tree-like plant that is native to southern Mexico and Central America. One traditional use of papaya is as a meat tenderizer. The fruit and sap contain the enzyme papain that breaks down meat fibers. Papain is used today as a component of powdered meat tenderizers.

Jasper Johns is a contemporary artist from Augusta, Georgia. Johns’ most famous work is called “Flag”, which he created two years after being discharged from the US Army, in 1954. “Flag” is a representation of the “Stars and Stripes” made with paint and a collage of newsprint.

Thomas Arne was an English composer from London. Arne wrote some iconic compositions including “Rule, Britannia!” He also wrote a version of “God Save the King” that became the British national anthem.

“Rule, Britannia!” is a poem by James Thomson, for which Thomas Arne composed the famous music.

Jade is actually the name given to two different mineral rocks, both of which are used to make gemstones. The first is nephrite, a mineral with a varying degree of iron content, the more iron the greener the color. The second is jadeite, a sodium and aluminum-rich pyroxene. As well as being used for gemstones, both jade minerals can be carved into decorative pieces.

Oceanus was a mythical figure personifying an enormous river that the ancient Greeks and Romans believed encircled the world. It is from the name “Oceanus” that we get out modern term “Ocean”.

“Wurst” is simply a German word for “sausage”.

A city hall in Germany is called a Rathaus. In days gone by there was often a restaurant located in the basement or cellar of a Rathaus, and this restaurant was given the name Rathskeller.

39. Casual parting … and a hint to this puzzle’s four longest answers : SEE YA!

51. Possible reason for an empty seat : NO SHOW