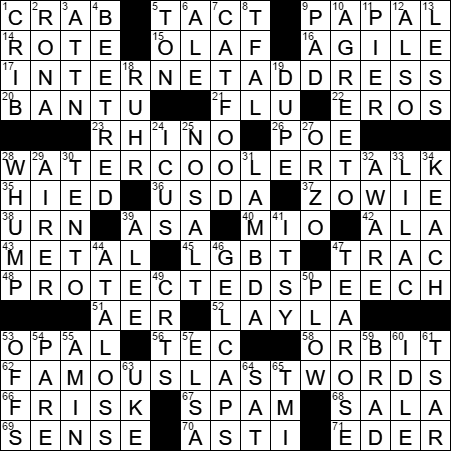 Theme: What’s Said in the End

Each of today’s themed answers ends with “something said”.

Vatican City is a sovereign city-state that is walled off within the city of Rome. Vatican City is about 109 acres in area, and so is the smallest independent state in the world. With about 800 residents, it is also the smallest state in terms of population. Although the Holy See dates back to early Christianity, Vatican City only came into being in 1929. At that time, Prime Minister Benito Mussolini signed a treaty with the Holy See on behalf of the Kingdom of Italy that established the city-state.

There are hundreds of Bantu languages, mainly spoken in central, east and southern Africa. The most commonly spoken Bantu language is Swahili, with Zulu coming in second.

26. Mystery writer whose Baltimore home is preserved as a museum : POE

The Poe Museum in Richmond, Virginia is housed in an old stone house built around 1740 that is the oldest original building in the city. The museum opened in 1922 and commemorates the years that Edgar Allan Poe spent living in the city.

“‘O sole mio” is a famous Italian song from Naples, written in 1898. The song’s lyrics are usually sung in the original Neapolitan, as opposed to Italian. The title translates from Neapolitan into “My Sun” (and not into “O, My Sun” as one might expect). It’s a love song of course, sung by a young man declaring that there is a sun brighter than that in the sky, the sun that is his lover’s face. Awww …

The Bloody Sunday march took place between Selma and Montgomery, Alabama on 7 March 1965. The 600 marchers involved were protesting the intimidation of African-Americans registering to vote. When the marchers reached Dallas County, Alabama they encountered a line of state troopers reinforced by white males who had been deputized that morning to help keep the peace. Violence broke out with 17 marchers ending up in hospital, one nearly dying. Because the disturbance was widely covered by television cameras, the civil rights movement picked up a lot of support that day.

The best-known rainbow flag is the one representing LGBT pride. Such usage of the rainbow flag was popularized in 1978 by artist Gilbert Baker. The varying colors of the flag represent the diversity of the LGBT community.

Gillette introduced the Trac II in 1971. The Trac II was the world’s first twin-blade razor.

Layla is one of the great rock anthems of the seventies, released by Derek and the Dominos in December of 1970. It is a masterpiece of composition, with the first half of the song a great vehicle for the guitar-playing talents of Eric Clapton. The second half is a beautifully melodic piano coda (a coda … taking up half the length of the track!). To top things off we have the “unplugged” version recorded by Clapton in 1992, a fabulous and inventive variation on the original.

“Tec” is a slang term for a private detective, a private investigator (PI).

The Eder is a river in Germany, a tributary of the Fulda River. The Eder has a dam near the small town of Waldeck which holds water in the large Edersee reservoir. This was one of the dams that was attacked by the RAF during WWII with the famous Barnes Wallis bouncing bombs. It was destroyed in the Dam Busters raid in 1943, but rebuilt the same year.

Tefal (also T-Fal) is a French manufacturer of cookware, famous for its nonstick line. The name “Tefal” is a portmanteau, of TEFlon and ALuminum, the key materials used in producing their pots and pans.

The Ruhr is a large urban area in western Germany. The area is heavily populated, and is the fifth largest urban area in the whole of Europe, after Istanbul, Moscow, London and Paris. The Ruhr became heavily industrialized due to its large deposits of coal. By 1850, the area contained nearly 300 operating coal mines. Any coal deposits remaining in the area today are too expensive to exploit.

The letter L in our modern Latin alphabet is equivalent to the Greek letter lambda. The uppercase lambda resembles the caret character on a keyboard (over the number 6 key).

Mike Hammer is the protagonist in a series of private detective novels by Mickey Spillane. The novels have been adapted for radio, television and the big screen. The actor most associated with Mike Hammer is Stacy Keach, who played the role in the TV series “Mickey Spillane’s Mike Hammer” from 1984 to 1987.

Too Much Information (TMI)!

“Deets” is a slang term for “details”.

26. Mystery writer whose Baltimore home is preserved as a museum : POE

44. Completely flummoxed : AT A LOSS