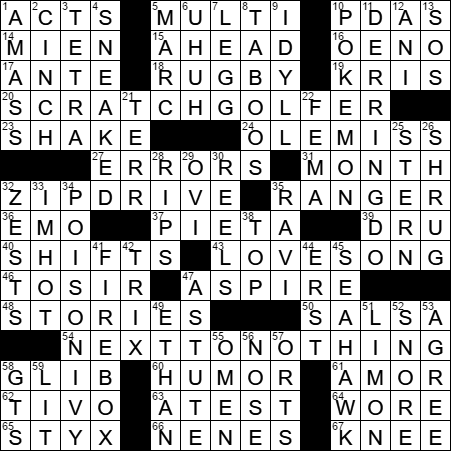 Theme: Next to Nothing

If you’ve ever seen a rugby match, you’ll recognize the “scrum”, where the players designated as “forwards” bind together and push against the forwards on the opposing team. It’s a way of restarting the game after various types of stoppages. Scrum is short for “scrummage”, which in itself is a variation of “scrimmage”. And “scrimmage” has its roots in the word “skirmish”. If you get the chance, take a look at the Matt Damon-Morgan Freeman movie called “Invictus”, directed by Clint Eastwood. It’s all about rugby in South Africa after Nelson Mandela came to power. A powerful film …

The singer Kris Kristofferson was born in Brownsville, Texas and was the son of a USAF Major General. Indeed, Kristofferson’s paternal grandfather was also a military officer, but in the Swedish Army. Kristofferson himself went into the US Army and served in West Germany, achieving the rank of Captain.

A golfer whose handicap is zero is known as a “scratch golfer”. A player with a handicap of 18, given that there are 18 holes in a full round, is known as a “bogey golfer”.

“Ole Miss” is the nickname for the University of Mississippi. The name “Ole Miss” dates back to 1897, the first year a student yearbook was published. The graduating class held a competition to name the yearbook and “Ole Miss” emerged as the winner. The name stuck to the yearbook, and also as a nickname for the school itself. The University of Mississippi sports teams have been known as the Rebels since 1936. Prior to 1936, they were known as the Mississippi Flood.

The Mississippi state quarter features two magnolia blossoms, and was first issued on October 15, 2002. Mississippi is known as the home to many stately Magnolia trees, giving it the nickname “the Magnolia State”.

The Pietà is a representation of the Virgin Mary holding in her arms the dead body of her son Jesus. The most famous “Pietà” is probably the sculpted rendition by Michelangelo which is located in St. Peter’s Basilica in Vatican City. In some depictions, Mary and her son are surrounded by other figures from the New Testament, and these depictions are known as “Lamentations”.

43. Ballad for a valentine : LOVE SONG

“To Sir, with Love” is an excellent 1967 drama film starring Sidney Poitier that is based on a novel of the same name by E. R. Braithwaite. The film is about an inexperienced teacher in a tough school in the East End of London. If you see the movie keep a lookout for a couple of supporting actors. Lulu plays the student called Babs Pegg, and also sings the hit theme song from the movie. Patricia Routledge plays fellow teacher Clinty Clintridge, and later in her career played Hyacinth Bucket in the enduring BBC comedy series “Keeping Up Appearances”.

The Hollywood actor Sidney Poitier was born in Miami, but grew up in the Bahamas. Poitiers breakthrough role in movies came with 1955’s “Blackboard Jungle”, in which he played an incorrigible high school student. I find it interesting that one of Poitier’s most respected performances found him playing a teacher of a rough set of students in 1967’s “To Sir, with Love”. Off the screen, Poitier entered the diplomatic service for the Bahamas, serving as the nation’s non-resident ambassador to Japan from 1997 until 2007.

“Salsa” is simply the Spanish for “sauce”.

The River Styx in Greek mythology was the river that formed the boundary between the Earth and the Underworld (or Hades). The souls of the newly dead had to cross the River Styx in a ferry boat piloted by Charon. Traditionally, a coin would be placed in the mouths of the dead “to pay the ferryman”.

The neon tetra is a freshwater fish, native to parts of South America. The tetra is a very popular aquarium fish and millions are imported into the US every year. Almost all of the imported tetras are farm-raised in Asia and very few come from their native continent.

“Pokémon GO!” is a reality-based video game in which players must locate, capture, battle and train virtual creatures known as Pokémon. The Pokémon are hidden in the real world, in the sense that they have to be located on an electronic device (like a smartphone) in “the real world”, for which a GPS location is needed. Players see the Pokémon overlaid on a view of the real world on their smart device.

As one might expect, “derring-do” (plural is “derrings-do”) comes from the phrase “daring to do”, which back in the 14th century was written as “dorrying don”.

The sitar has been around since the Middle Ages. The sitar is a stringed instrument that is played by plucking, and is used most often in Hindustani classical music. In the West we have been exposed to the instrument largely through the performances of Ravi Shankar and some music by George Harrison of the Beatles, a onetime student of Shankar.

The Seattle Seahawks joined the NFL as an expansion team in 1976, along with the Tampa Bay Buccaneers. The Seahawks have enthusiastic fans, often referred to as the “12th man”, a reference to how well their support can buoy the team. The Seahawks fans have twice broken the Guinness World Record for the loudest crowd noise at a sporting event.

1. Most musicals have two : ACTS

5. Start to faceted or purpose : MULTI-

43. Ballad for a valentine : LOVE SONG

1. Accumulate, as a fortune : AMASS