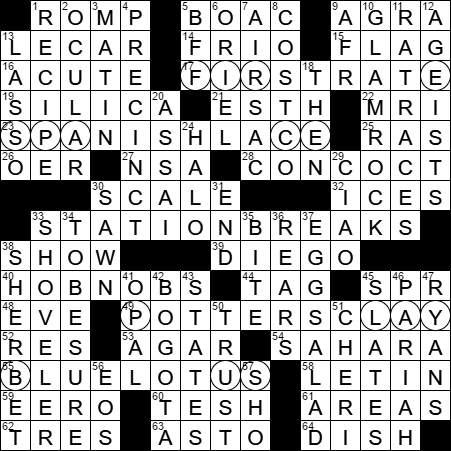 Today’s themed answers include circled letters at either end. Those letters spell out words that are BROKEN, split, and those words are all types of STATIONS:

5. Airline mentioned in the first line of the Beatles’ “Back in the U.S.S.R.” : BOAC

British Overseas Airways Corporation (BOAC) was one of the two airlines that were merged in 1974 to form British Airways (the other was British European Airways, known as BEA).

By the time the Beatles recorded “Back in the U.S.S.R.”, they were having a lot of problems working with each other. The song was recorded in 1968, with the band formally dissolving in 1970. Tensions were so great during the recording of “Back in the U.S.S.R” that Ringo Starr actually stormed out saying that he had quit, and the remaining three Beatles made the record without Ringo. Drums were played mainly by Paul McCartney, but there are also drum tracks on the final cut by both George Harrison and John Lennon. Interesting, huh?

French automaker Renault made the “mini-like” Renault 5 and sold it as the Renault “Le Car” in North America. My Dad had a Renault 5 back in Ireland …

Glass is made up of about 75% silica, another name for sand.

A mantilla is a traditional lace or silk shawl from Spain. It is often worn over a high comb called a “peineta”, which makes creates the illusion that the wearer is taller than she actually is.

The world-famous San Diego Zoo first opened its doors to visitors in 1916. The zoo was founded in the Balboa Park area of the city, on the site of the Panama-California Exposition that was held the prior year. The zoo was needed to care for the abandoned exotic animal exhibits from the exposition.

“To hobnob with” means “to rub elbows with, associate with”. The term dates back to the mid 1700s and is derived from “hob and nob”, a phrase meaning to toast each other in turn, or to buy alternate rounds of drinks.

Agar (also “agar-agar”) is a jelly extracted from seaweed that has many uses. Agar is found in Japanese desserts, and can also be used as a food thickener or even as a laxative. In the world of science it is the most common medium used for growing bacteria in Petri dishes.

The blue lotus is a water lily that is also known as the sacred lily of the Nile. In Egyptian mythology, the blue lotus was a symbol of the sun, as the flowers close at night and open in the morning.

60. Composer who was a CBS reporter : TESH

John Tesh is a pianist and composer, as well as a radio and television presenter. For many years Tesh presented the show “Entertainment Tonight”. For “ET” he once covered the filming of an episode of “Star Trek: The Next Generation”. As part of the piece, he volunteered to act as a Klingon warrior and so if you see the “Star Trek: TNG” episode called “The Icarus Factor” in reruns, watch out for John Tesh engaging in ritual torture with Mr. Worf as his victim.

The nursery rhyme “Hey Diddle Diddle” has been around at least since the mid-1700s.

Hey diddle diddle,
The cat and the fiddle,
The cow jumped over the moon,
The little dog laughed to see such fun,
And the dish ran away with the spoon.

Marseille (often written “Marseilles” in English) is the second largest city in France, after Paris. Marseille is also the largest commercial port in the country. I used to live nearby, and can attest that Marseille and environs is a great place to visit …

A “precinct” is a defined area, often in a city, that is established for administrative purposes. For electoral purposes in the US, the term “precinct” is sometimes used interchangeably with “election district”. Famously, the city of New York uses the term “precinct” for its police stations. The term comes from the Medieval Latin word “precinctum” meaning “enclosure, boundary line”.

An oriel window is a bay window that projects from a wall, but does not reach all the way to the ground.

The alveoli are the air sacs in the lungs, the basic units of respiration. They are hollow cavities around which the alveolar membranes perform the gas-exchange of carbon dioxide and oxygen. That gas exchange surface is about 800 sq. ft. in the average human.

The Carthaginian Republic was centered on the city of Carthage, the ruins of which are located on the coast of modern-day Tunisia. The Latin name for the people of Carthage was “Afri”. When the Romans took over Carthage, they created a province they called “Africa”. That name extended over time to include the whole continent.

Kilimanjaro is a dormant volcano in Tanzania, and is the highest mountain in the whole of Africa.

I remember the days of glam rock so well, as it was a hugely popular genre of music in the British Isles during the early seventies. Artistes wore the wildest of clothes, big hair, shiny outfits and really high platform boots. Names associated with glam rock are T. Rex, David Bowie, Roxy Music and Gary Glitter.

The singer Prince was born in Minneapolis, and he lived there most of his life. Born Prince Rogers Nelson, his given name honored his father, a jazz musician who used the stage name Prince Rogers. Prince died in 2016 due to an accidental fentanyl overdose at his home and recording studio located just southwest of Minneapolis. The home and studio, known as Paisley Park, is now a museum that is open to the public.

Maggie Kuhn became a social activist fighting ageism when she was forced to retire from her job in 1970, at the age of 65. Kuhn then founded the Gray Panthers movement, which focuses on ageism and other social justice issues such as the preservation of Medicare and Social Security and the introduction of single-payer healthcare.

The Italian term “assai” translates as “very”, and is used in music with the same meaning.

A lacto-ovo vegetarian is someone who does not consume meat or fish, but does eat eggs (ovo) and dairy (lacto) products.

The Commonwealth of Australia is a federation of six states:

A “persona non grata” (plural “personae non gratae”) is someone who is not welcome. The phrase is Latin for “an unacceptable person”.

“Ryan’s Hope” is a soap opera that ran on ABC from 1975 to 1989. The show’s storyline centers on an Irish-American family in New York City. Never saw it …

“Chéri” is a form of familiar address in French, meaning “dear, … “Chéri” is the form used when talking to a male, and “chérie” to a female.

In Greek mythology, Eos is the goddess of the dawn who lived at the edge of the ocean. Eos would wake each morning to welcome her brother Helios the sun. The Roman equivalent of Eos is Aurora.

Showtime (SHO) is a competitor of the Movie Channel (TMC) in terms of program lineup, although both channels are in fact owned by CBS.

5. Airline mentioned in the first line of the Beatles’ “Back in the U.S.S.R.” : BOAC

60. Composer who was a CBS reporter : TESH

2. Pertaining to the eye : OCULAR