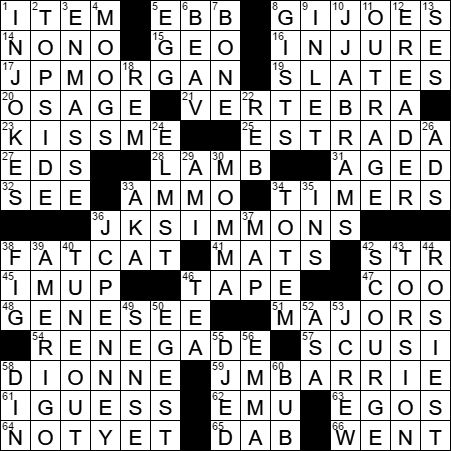 Today’s themed answers are the names of famous people who routinely use two initials at the start of their names, the first being the letter J:

John Pierpont Morgan was a financier and banker active in the last half of the 19th century and the early 20th century. Given the tremendous power that came with his wealth, Morgan and other tycoons were at times unpopular with the masses. Morgan did not often respond to criticism although did once say “I owe the public nothing”. Around the same time, John D. Rockefeller habitually rebuffed public inquiries with the words “silence is golden”.
US Steel was founded in 1901 with a merger of Carnegie Steel, Federal Steel and National Steel. The resulting company immediately became the world’s first billion-dollar corporation. US Steel reorganized in 1986 and changed its name to USX Corporation, but reverted to the US Steel name in 2001. I think I’m right in saying that the USX name was chosen because US Steel is traded under the symbol “X” on the New York Stock Exchange …

“August: Osage County” is a dark comedy play by Tracy Letts that won a 2008 Pulitzer Prize for Drama. I saw the 2013 movie adaptation that has a great cast including Meryl Streep, Julia Roberts, Ewan McGregor, and Benedict Cumberbatch. I really enjoyed it …

The vertebrae are the individual bones that give strength and flexibility to the spinal column. The word “vertebra” is Latin. The term probably derives from the verb “vertere” meaning “to turn”, the idea being that the individual bones in the back allow turning and twisting.

Actor Erik Estrada’s big break came with the movie “Airport 1975”, in which he played a Boeing 747’s flight engineer. He then co-starred as motorcycle police officer Poncherello on the television show “CHiPs” from 1977-81.

In the Christian tradition, a nativity scene (also “crèche”) is a display of representing the the scene of the birth of Jesus. Nativity scenes might be subjects for paintings, for example, although the term is usually used for seasonal displays associated with the Christmas season.

Genuine Parmesan cheese is made in and around the province of Parma in northern Italy, which province gives the cheese its name.

J. K. Simmons is perhaps best known in recent years for his supporting role in the 2014 movie “Whiplash”, for which he won an Oscar playing an abusive music instructor. Simmons is also well known for playing the professor in the University of Farmers series of ads for the Farmers Insurance Group.

The string (str.) section is part of an orchestra (orch.).

One of Genesee Brewing Company’s most famous beers is Genesee Cream Ale, which was introduced in 1960. If you’re ordering a Genesee Cream Ale you might as for a “screamer”, which is what some Genesee drinkers call the bottle or can the beer comes in.

A renegade is a person who leaves one cause, usually to take up an opposing cause. “Renegade” likely comes from the Spanish “renegado”, a term which originally was used for a Christian who had converted to Islam back in the late 16th century.

Palermo is the capital of the Italian autonomous region of Sicily. Palermo was founded by the Phoenicians over 2700 years ago.

Dionne Warwick is a very, very successful singer, with more Top 100 hits than any other female vocalist other than Aretha Franklin. Warwick had a pretty successful cousin who was a singer as well … called Whitney Houston.

The author and dramatist J.M. Barrie is best remembered as the creator of Peter Pan. Barrie wrote a play in 1904 called “Peter Pan; or, the Boy Who Wouldn’t Grow Up”. He turned this into a novel called “Peter and Wendy” in 1911. The girl’s name “Wendy” was very uncommon before Barrie named his character, and he is given credit for making the name as popular as it is today.

The official symbol of Australia is a coat of arms that features a kangaroo and an emu.

Robert Moog invented the Moog Synthesizer in the sixties, an electronic device that he used to produce music. I used to own a few of his albums, including a Moog version of Mussorgsky’s “Pictures at an Exhibition”. What a great performance that was …

The McMuffin breakfast sandwich was introduced, without the knowledge of the corporate office, by the operator of a Santa Barbara, California franchise in 1972. Back then, McDonald’s only offered food for lunch and dinner. The initial reaction of the corporate office on hearing about the McMuffin was to reprimand the Santa Barbara franchise operator, before embracing the concept. Apparently, McMuffins are only offered at breakfast because the grill temperature is different for cooking beef patties and eggs.

Wally Cleaver and his younger brother “the Beaver” were the children of Ward and June Cleaver on the fifties sitcom “Leave It to Beaver”.

J. J. Abrams is a director and producer of both movies and television shows. He created the TV dramas “Alias” and “Fringe”, and co-created the highly successful show “Lost”. He also directed “Mission: Impossible III” on the big screen, and the 2009 movie “Star Trek”.

In the TV show “Lost”, the plane that crashed was operated by Oceanic Airlines. The fictional airline Oceanic Airlines or Oceanic Airways turns up a lot on the big and small screen. Try and spot Oceanic in the movies “Executive Decision” and “For Love of the Game”, and in episodes of the TV shows “Castle”, “Chuck”, “Flipper”, “The Goldbergs” and “The X-Files”.

REM is an acronym, short for Rapid Eye Movement sleep. REM sleep takes up 20-25% of the sleeping hours and is the period associated with one’s most vivid dreams.

Pickett’s Charge was an infantry assault that took place on the last day of the Battle of Gettysburg. The charge was a futile manoeuvre ordered by Confederate General Robert E. Lee that resulted in a loss of 50% of the attacking rebel forces. The defeat turned the course of the battle, and the Battle of Gettysburg turned the course of the Civil War.

“A Nightmare on Elm Street” is a Wes Craven slasher-horror film, released in 1984. As I don’t do “slasher” nor “horror”, I only learned relatively recently that Johnny Depp was in the movie, making his feature film debut.

JCPenney department stores started out as the Golden Rule Store, founded by James Cash Penney and two partners in 1902 in Kemmerer, Wyoming. That first store is still operating today in Kemmerer. Sam Walton used to work for Penney’s in Des Moines, Iowa, before moving on to found the Walmart empire.

39. Explorer Vespucci for whom the New World was named : AMERIGO

Twinings is a distributor of tea that was founded in England in 1706. That’s a long time ago! The Twinings logo is the oldest continuously-used logo in the world.

53. Clothing chain … or what the answers to starred clues comprise? : J.CREW

The world’s first radio disk jockey was one Ray Newby of Stockton, California who made his debut broadcast in 1909, would you believe? When he was 16 years old and a student, Newby started to play his records on a primitive radio located in the Herrold College of Engineering and Wireless in San Jose. The records played back then were mostly recordings of Enrico Caruso.

Jane Austen’s novel “Emma” is the tale of Emma Woodhouse and the wonderful George Knightley. At the end of the story, Emma marries Knightley and her young friend Harriet marries Robert Martin, who had been trying to get Harriet’s attention practically from page one of the novel!

14. Something frowned upon : NO-NO

63. Some celebs have delicate ones : EGOS

39. Explorer Vespucci for whom the New World was named : AMERIGO

42. Cause of calamity : SCOURGE

53. Clothing chain … or what the answers to starred clues comprise? : J.CREW