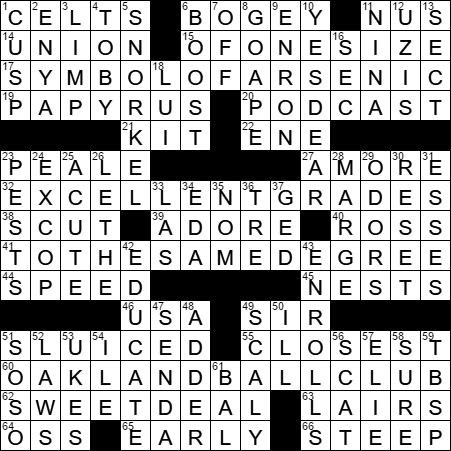 Theme: A and S

Today’s themed answers all have similar, if not the same, clue:

The Celts were a very broad group of people across Europe, linked by common languages. The Celts were largely absorbed by other cultures, although a relatively modern revival of the “Celtic identity” is alive and well in the British Isles. Such Celtic peoples today are mainly found in Ireland, Scotland, Wales and Brittany in France..

The Principality of Wales was created in 1216 when sovereign princes of Welsh territories agreed that Llywelyn the Great would become the paramount ruler of the region. The Principality covered about two thirds of what we call Wales today, and it gained partial recognition by the English Crown with the title of Prince of Wales being created for Llywelyn the Great and his successors. The relationship between the Principality and its powerful neighbor was an uneasy one though, and eventually there was a military conquest by the English King Edward I in 1282-1283. In 1284 the Statute of Rhuddlan became law which brought all the land held by the Prince of Wales under English rule. And today of course, the title of Prince of Wales is held by the heir to the British throne, Prince Charles.

6. Subpar performance … or not : BOGEY

We sometimes use the term “bogey” for a performance target, a mark that is to be attained.

Arsenic is element #33 in the periodic table, and has the chemical symbol “As”. Because of arsenic’s toxicity, it was very commonly used in pesticides. These compounds are getting banned over time, but it seems there is a long way to go. Arsenic in aquifers continues to be a problem around the world, including here in the US. China has introduced limits to the amounts of arsenic permitted in food as well as water, mainly as the Chinese staple rice is particularly good at accumulating arsenic from groundwater.

The papyrus plant was commonly found in the Nile Delta of Europe. The pith of the plant was used to make a thick, paper-like material on which one could write. This writing material, which became known as papyrus (plural “papyri”), became a competitor for the most popular writing surface of the day known as parchment, which was made from animal skins.

Rembrandt Peale was a prolific American portrait artist. As one might guess from his given name, Rembrandt was the son of another artist, Charles Willson Peale, who named him for the Dutch painter Rembrandt van Rijn. Indeed, Rembrandt had two brothers, named Raphaelle and Rubens Peale. Rembrandt Peale’s most famous works are portraits of George Washington and Thomas Jefferson.

“Bésame Mucho” was written in 1940, by Mexican songwriter Consuelo Velázquez. “Besame mucho” translates into “kiss me a lot”, and the remarkable thing is that according to Velázquez, at the time she wrote the song she had never even been kissed herself! “Besame Mucho” was just one of Jimmy Dorsey’s eleven number one hits, all from the thirties and forties.

Andrea Bocelli is a classically-trained tenor who sings popular music, a so-called cross-over artist. Bocelli was born with poor eyesight and then became totally blind at the age of 12 when he had an accident playing soccer.

“Scut” is an informal term that describes a contemptible person.

The traffic calming device we call a “speed bump” over here in the US, is known by the colorful name “sleeping policeman” in the UK.

46. Nation with a pyramid on its currency: Abbr. : USA

Conspiracy theorists love to point out “suspicious” symbols on the one-dollar bill. The pyramid on the bill is unfinished, with 13 steps. The number 13 has been associated with the occult, but it is also the number of original colonies which declared independence from Britain forming the United States. Not so suspicious after all …

Sir John Gielgud was a marvelous English actor of stage and screen. Gielgud eschewed the Hollywood screen for much of his career, and so is known to us in films portraying more mature characters. For example, he played the manservant Hobson in 1981’s “Arthur”, and won that season’s Best Supporting Actor for his efforts. Gielgud is also one of the very few people who has won and Oscar, Emmy, Grammy and Tony.

A “sluice” is a water channel with a gate at its head that is used to control the amount of water flowing.

The Oakland Athletics (usually “the A’s”) baseball franchise was founded back in 1901 as the Philadelphia Athletics. The team became the Kansas City Athletics in 1955 and moved to Oakland in 1968.

Toby Keith is a country music singer from Clinton, Oklahoma. One of Keith’s number one hits is a 2003 duet with Willie Nelson called “Beer for My Horses”.

9. “The Smartest Guys in the Room” subject : ENRON

Orly is on the outskirts of Paris, to the south of the city. It is home to the Paris-Orly Airport, the second busiest international airport for the city after the more recently built Charles de Gaulle Airport. That said, Orly is home to more domestic flights than Charles de Gaulle.

The 1973 movie “Serpico”, starring Al Pacino, is a based on a book by Peter Maas. The book is based on the true story of undercover police officer Frank Serpico. Serpico went undercover to investigate corruption within the New York Police Department. Frank Serpico was awarded NYPD’s Medal of Honor in 1972, and one month later retired from the force. He moved to Europe, living in Switzerland and the Netherlands for ten years. Serpico now resides in the New York town of Stuyvesant.

The Lethe is one of the five rivers of Hades in Greek mythology. All the souls who drank from the river Lethe experienced complete forgetfulness. The Greek word “lethe” means “oblivion, forgetfulness”.

Marge Simpson is the matriarch of the family in “The Simpsons” animated sitcom. Marge is voiced by actress Julie Kavner, who is also well known for playing Brenda Morgenstern in the TV show “Rhoda” in the seventies.

There’s a letter S (ess) on either end (border) of the word “Swiss”.

Gran Canaria, or Grand Canary Island, may be grand but it isn’t quite as big as Tenerife, the largest island of the group and the most populated. The capital of Gran Canaria is Las Palmas, which was a port of call for Christopher Columbus in 1492 on his way to the Americas.

In French, the “nom de famille” is the family name, last name.

The General Educational Development (GED) tests are a battery of five tests designed to demonstrate that a student has the academic skills of someone who has graduated from an American or Canadian high school.

Our word “scat”, meaning “get lost!” comes from a 19th-century expression “quicker than s’cat”, which meant “in a great hurry”. The original phrase probably came from the words “hiss” and “cat”.

Elie Wiesel was a holocaust survivor, best known for his book “Night” that tells of his experiences in Auschwitz and Buchenwald. Wiesel was awarded the Nobel Peace Prize in 1986.

6. Subpar performance … or not : BOGEY

46. Nation with a pyramid on its currency: Abbr. : USA

9. “The Smartest Guys in the Room” subject : ENRON