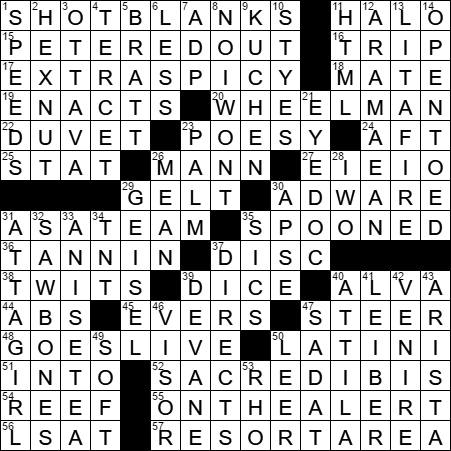 Nowadays we use the term “junket” for a trip taken by a government official at public expense that has no public benefit. Back in the late 1500s, a junket was a basket for carrying fish. The term was then applied to a feast or banquet, perhaps adopting the notion of a picnic “basket”. From feast or banquet, the term came to mean a pleasure trip, and is now our political junket.

“Poesy” is an alternative name for poetry, often used to mean the “art of poetry”.

“Buddenbrooks” was Thomas Mann’s first novel, published in 1901. When Mann was awarded the Nobel Prize for Literature in 1929, it was given on the basis of his whole body of work, although “Buddenbrooks” was specifically mentioned as the main reason for the award.

Some red wines and teas can have an astringent taste, a dry and puckering feeling, because of the presence of tannins. Tannins occur naturally in plants, probably as a defensive measure against predators who shy away from the astringent. The word “tannin” comes from an Old German word for oak or fir tree, as in “Tannenbaum”.

The abdominal muscles (abs) are more correctly referred to as the rectus abdominis muscles. They are all called a “six-pack” in a person who has developed the muscles and who has low body fat. In my case, more like a keg …

Scientists have been using radio waves to detect the presence of objects since the late 1800s, but it was the demands of WWII that accelerated the practical application of the technology. The British called their system RDF standing for Range and Direction Finding. The system used by the US Navy was called Radio Detection And Ranging, which was shortened to the acronym RADAR.

“Ottava” is the Italian word for “octave”.

The actor Benjamin Bratt’s most noted role has to be Detective Rey Curtis on the NBC cop show “Law & Order”. Bratt dated the actress Julia Roberts for a few years.

Automatic Data Processing (ADP) is an enterprise based in Roseland, New Jersey that provides business services to companies.

We use the term “kucken” in English to describe a frosted coffee cake. “Kuchen” is the German word for “cake”.

HTML is HyperText Markup Language, the language used to write most Internet web pages (including this one).

The ancient Biblical land of Aram was named after Aram, a grandson of Noah. Aram was located in the center of modern-day Syria. Aramaic became the everyday language of Syria, Mesopotamia and Palestine.

Date palms can be either male or female. Only the female tree bears fruit.

“Dr. Seuss” was the pen name of Theodor Seuss Geisel. Geisel first used the pen name while studying at Dartmouth College and at the University of Oxford. Back then, he pronounced “Seuss” as it would be in German, i.e. rhyming with “voice”. After his books found success in the US, he went with the pronunciation being used widely by the public, quite happy to have a name that rhymed with “Mother Goose”.

“Sic ’em” is an attack order given to a dog, instructing the animal to growl, bark or even bite. The term dates back to the 1830s, with “sic” being a variation of “seek”.

Actor William Devane is perhaps best known for playing Greg Sumner on “Knots Landing in the eighties and nineties, and more recently for playing Secretary of Defense James Heller on “24”. Here’s a little trivia: Devane’s father was chauffeur to Franklin D. Roosevelt when he was Governor of New York.

Jerry Leiber and Mike Stoller were a songwriting partnership, with Leiber writing lyrics and Stoller writing music. The list of Leiber and Stoller hits is impressive, including “Hound Dog”, “Poison Ivy”, “Stand By Me”, “Jailhouse Rock” and “Spanish Harlem”.

The term “venire facias juratores” is used to describe a write directing that a jury is to be assembled. The term is also used for resulting pool of jurors, often shortened to “venire facias”, or just “venire”. The Latin “venire facias” translates as “may you cause to come”.

An arista is a stiff bristle found on some plants. The bristles seen on some grasses and cereals are called awns, and awns are a specific type of arista.

Nowadays, we tend to think of a “visor” as the front brim of a hat, or a shade for the eyes. The original “viser” was the front part of a helmet, back in the 14th century. The term comes from the Old French “vis” meaning “face”.

To take “a gander” is to take a long look. It’s a term we’ve been using since the 1880s and comes from the idea that in taking a long look one might be craning one’s neck like a goose (or gander).