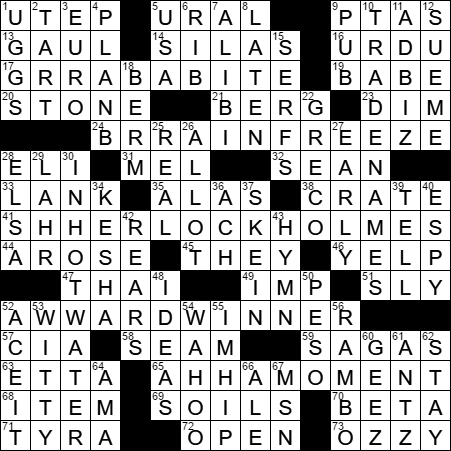 Today’s themed answers are well-known phrases, but with the second letter doubled. The result is a “punny” answer with the first three letters creating an interjection referred to in the clue:
17A. What Dobermans do for dinner? : GRR-AB A BITE (from “grab a bite”)
24A. Super-cold concoction at Baskin-Robbins? : BRR-AIN FREEZE (from “brain freeze”)
41A. World’s stealthiest detective? : SHH-ERLOCK HOLMES (from “Sherlock Holmes”)
52A. Cutest Baby contest champion? : AWW-ARD WINNER (from “award winner”)
65A. Massage epiphany? : AHH-A MOMENT (from “aha moment”)

The University of Texas at El Paso (UTEP) was founded in 1914, originally as the Texas State School of Mines and Metallurgy. To this day there is a mine shaft on the campus, and the mascot of the school’s sports teams is Paydirt Pete, a prospector from the mining industry. The teams are also known as the UTEP Miners and Lady Miners.

“Silas Marner: The Weaver of Raveloe” is a novel written by George Eliot and first published in 1861. There’s an excellent BBC TV version of the tale (shown on PBS) starring Ben Kingsley in the title role, with Patsy Kensit playing Eppie, the young orphaned child that Marner takes under his wing.

“Hindustan” is a historical name for the northwestern part of the Indian subcontinent. The name translates as “Land of the Hindus”. I am told by a kind blog reader that the term “Hindustan” is frowned on by some in India because of its religious connotation.

A mill pond is a reservoir for a mill that is powered by water, often created by building a mill dam across a river or stream. The term “mill pond” is also used in the expression “it’s like a mill pond”, meaning that the water is flat and calm. Famously, the words, “It’s like a mill pond” were uttered by Captain Edward Smith, not long before his ship (the Titanic) hit an iceberg …

Sean Connery is most famous for playing the original James Bond in the successful series of movies. Back in his native Scotland, Connery is very active in politics and is a member of the Scottish Nationalist Party. He actively campaigns for Scottish independence from Britain and has stated that he believes Scotland will achieve that goal within his own lifetime. Whether that happens or not, is the subject of much speculation …

If ever there was a movie that defines a career breakthrough for an actor, it would have to be “Rocky” for Sylvester Stallone. Stallone was a struggling actor in 1975 when a Muhammad Ali fight inspired Stallone to write a screenplay for a boxing movie, which he did in just three days. His efforts to sell the script went well but for the fact that the interested studios wanted a big name for the lead role, and Stallone was determined to be the star himself. Stallone persevered and “Rocky” was eventually made with him playing title role of Rocky Balboa. The movie won three Oscars, and “Sly” Stallone had arrived …

Tyra Banks is a tremendously successful model and businesswoman. Banks created and hosts the hit show “America’s Next Top Model “, and also has her own talk show. She was also the first African American woman to make the cover of the “Sports Illustrated” swimsuit issue.

English singer Ozzy Osbourne became famous in the seventies as the lead singer of the heavy metal band Black Sabbath. His level of success soared again in the early 2000s when he appeared in an MTV reality show called “The Osbournes”, along with his wife Sharon and two of his three children, Kelly and Jack. Ozzy and Sharon’s eldest child, Aimee, refused to sign up for the show, opting instead for some level of privacy.

Uggs are sheepskin boots that originated in Australia and New Zealand. Uggs have sheepskin fleece on the inside for comfort and insulation, with a tanned leather surface on the outside for durability. Ugg is a generic term down under, although it’s a brand name here in the US.

The title of widest circulation of any American newspaper is an honor competed for by “The Wall Street Journal” and “USA Today”, with each paper selling about 2 million copies each day (including online subscribers). “USA Today” was launched in 1982.

The term “berm” can be used to describe a physical barrier of some kind. Berms can be constructed along a highway to protect those living and working nearby from noise pollution.

“El Greco” (“the Greek”, in Spanish) was the nickname of the artist whose real name was Domenikos Theotokopoulos. El Greco was born in Crete in 1541, and moved to Venice to study art when he was in his early twenties. A few years later he moved to the city of Toledo in central Spain, where he lived and worked for the rest of his life.

Elsa Schiaparelli was an Italian fashion designer, a great rival of the perhaps more famous Coco Chanel. Schiaparelli was most successful between the two World Wars, but her business closed in 1954 as she failed to adapt to changing tastes after WWII.

Bert Lahr’s most famous role was the cowardly lion in “The Wizard of Oz”. Lahr had a long career in burlesque, vaudeville and on Broadway. Lahr also starred in the first US production of Samuel Beckett’s play “Waiting for Godot”, alongside Tom Ewell.

34. Singer who formerly stylized her name with a dollar sign : KESHA

The wahoo is a cousin of the mackerel, and is known as the “ono” in Hawaii.

“First Blood” was the original of the four “Rambo” films starring Sylvester Stallone as John Rambo, a troubled Vietnam War veteran. I thought “First Blood” was a pretty good film actually, but the sequels were terrible, and way too violent for me. But action all the way …

34. Singer who formerly stylized her name with a dollar sign : KESHA