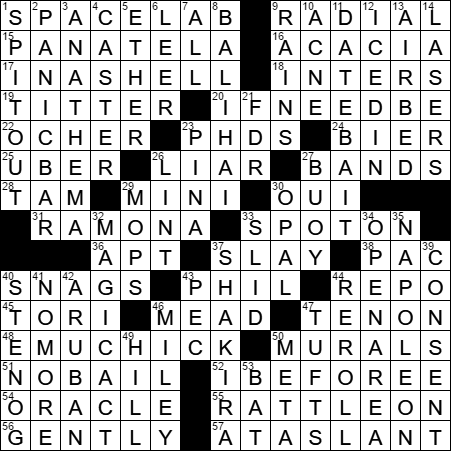 Perhaps in honor of April Fools’ Day, we have a mini-themed Saturday puzzle. Starting from the letter S at the 40-across answer SNAGS, we have the letters STAIRS reading in the northeasterly direction, AT A SLANT:

Spacelab was a modular science laboratory that was carried in the cargo bay of 32 Space Shuttle missions from 1981 until 2000. It was designed and constructed by 10 European nations with funds from the European Space Agency (ESA), with NASA providing ground facilities and managing Space Shuttle flights.

Radial tires (actually “radial-ply tires) are so called because the cord plies embedded in the rubber are arranged radially from the centre of the tire. This means that the plies are at right angles to the direction of travel. In older tires the plies were criss-crossed over each other, at angles of 60 and -60 degrees from the direction of travel. Such tires are called “cross-ply” or “bias” tires.

A panatela is a long thin cigar. It is a about the length of a “regular” cigar, but is not much wider than a cigarette.

Ochre is often spelled “ocher” in the US (it’s “ochre” where I come from). Ocher is a light, yellowy-brown color, although variations of the pigment are possible such as red ocher and purple ocher.

“Bier” is the German word for “beer”.

The word “yes” translates into German as “ja”, and into French as “oui”.

Punxsutawney is a borough in Pennsylvania, located about 80 miles northeast of Pittsburgh. Punxsutawney Phil is the famous groundhog that lives in the area. Phil comes out of his hole on February 2 each year and if he sees his shadow he goes back into his hole predicting six more weeks of winter weather. February 2 is known as Groundhog Day.

“Coming of Age in Samoa” sounds like a fascinating book. It was written by American cultural anthropologist Margaret Mead and published in 1928. In the book, Mead examines the behavior of youths in Samoa, making some comparisons with youths in America. One major observation she made was the smooth transition from childhood to adulthood of Samoan girls, compared to what she described as a more troublesome transition in the US. Mead followed up “Coming of Age in Samoa” with a similar work in 1930 titled “Growing Up in New Guinea”, which documented her observations of the people of the Manus Province of Papua New Guinea.

One simple type of joint used in carpentry is a mortise and tenon, basically a projection carved at the end of one piece of wood that fits into a hole cut into the end of another. In a dovetail joint, the projecting tenon is not rectangular but is cut at a bias, so that when the dovetails are joined they resist being pulled apart. You’ll see dovetail joints in drawers around the house.

A “mural” is a painting that is applied directly to a wall or a ceiling. The term comes from the Latin “murus” meaning “wall”.

“I before E, except after C”, although with so many exceptions, I don’t think that this rule is taught in schools anymore …

A crash bar or panic bar is a special door handle that allows someone to open a locked door quickly, often in the case of an emergency. Crash bars are often mandated by fire regulations on the doors used to exit a building.

The Greek philosopher Empedocles proposed that there are four elements that made up the universe, namely earth, water, air and fire. Aristotle later proposed a fifth element which he called aether (also “ether”). Aether was the divine substance that made up the stars and planets.

Shakira is a hugely successful singer from Colombia. She used to appear on TV as one of the coaches on the reality show “The Voice”. Shakira is the highest-selling Colombian performing artist of all time.

Tufts University is a private school in the city of Medford, near Boston. The school was built in 1852 on land donated by Charles Tuft a local businessman. One of the early benefactors of the school was P. T. Barnum who funded the Barnum Museum of Natural History located on the college grounds. This museum is home to the stuffed hide of Jumbo, the famous elephant. Jumbo is also the school’s mascot.

There are five metacarpal bones in each hand. They make up the framework of the palm and the back of the hand. Each metacarpal is connected to a finger and the wrist. The equivalent bones in the foot are called the metatarsals.

17. Emotionally withdrawn : IN A SHELL

37. Delight at the comedy club : SLAY

57. Like an escalator, and, aptly, like the six-letter word that begins where 40-Across ends : AT A SLANT

32. It could involve a disappearance : MAGIC ACT