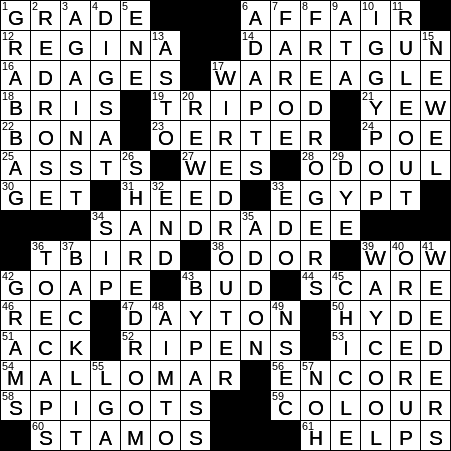 Regina Spektor is a Moscow-born American singer, songwriter and pianist. Spektor’s genre of music is described as “anti-folk”, whatever that is …

Auburn University in Alabama was chartered in 1856, as the East Alabama Male College. The school was renamed when it was granted university status in 1960. Auburn’s sports teams are known as the Tigers, for which supporters use the battle cry “War Eagle!”

Discus thrower Al Oerter is one of only three competitors to have won a gold medal in four consecutive Olympic Games in the same individual event. The other two sportsmen to have achieved the feat are Carl Lewis in the long jump and Paul Elvstrom in sailing.

“The Gold-Bug” is a short story by Edgar Allan Poe, a mystery tale about a man who was bitten by a gold-colored bug. The story first appeared in three installments in the ”Philadelphia Dollar Newspaper” in 1843, and became very popular. He had submitted the story to a writing contest sponsored by the paper, and it was published as the winning entry. The grand prize also included $100 in cash, which was likely the largest sum that Poe ever received for a work in his lifetime.

Wes Bentley is an actor who is perhaps best known for playing Ricky Fitts, the voyeuristic son of the homophobic Colonel Frank Fitts in the 1999 blockbuster film “American Beauty”. A 2009 documentary called “My Big Break” tells of Bentley’s career taking off after “American Beauty” was released, and his subsequent struggles which addiction to drugs and alcohol that led to financial ruin. Bentley is well on the road to recovery, and has been appearing regularly on the small and large screens since 2010.

Lefty O’Doul was a baseball player and manager from San Francisco. O’Doul was instrumental in spreading the popularity of the sport in Japan both before and after WWII. In fact, the Tokyo Giants were named by O’Doul, a reference to the New York Giants franchise with whom he spent the last years of his playing career. O’Doul also owned a restaurant in San Francisco that bears his name and which still operates today (near Union Square). There’s a bridge near AT&T Park, the Giant’s relatively new ballpark, that’s called Lefty O’Doul Bridge.

33. Land mentioned in the spiritual “Go Down, Moses” : EGYPT

“Go Down, Moses” is a Christian spiritual song created by African slaves in the US.

When Israel was in Egypt’s land:
Let my people go,
Oppress’d so hard they could not stand,
Let my People go.

The actress Sandra Dee started out as a model before moving into film. After a promising start to her career it seemed to peter out, and the public became more interested in her 7-year marriage to Bobby Darin. And of course she will forever be remembered from the song in the movie and stage-show “Grease” called “Look at Me, I’m Sandra Dee”.

“Gidget” is an early “beach party film” that was released in 1959. The movie stars Sandra Dee as a teenage girl who falls in love with a young surfer. The surfer’s gang gives the young lass the nickname “Gidget”, a portmanteau of “girl” and “midget”.

Ford manufactured the Thunderbird (T-Bird) from 1955 to 2005, originally as a two-seater sporty convertible. The T-Bird was introduced as a competitor to Chevrolet’s new sports car, the Corvette.

Wright-Patterson Air Force Base is located just east of Dayton, Ohio. The first aircraft operations on the land now occupied by the base were conducted way back in 1904. There, Orville and Wilbur Wright made the initial test flights in their Wright Flyer III aircraft.

The first chocolate-coated marshmallow confection was created in Denmark about 200 years ago, and today Denmark produces more of the treats than any other nation. The US version is known as a Mallomar and is produced by Nabisco, generally from October through April. Mallomars melt easily, and so aren’t made available in the warmer months.

Tottenham is an area in north London in England. It is home to a famous football (soccer) club called Tottenham Hotspur, the team that I used to follow as a kid many moons ago …

On the sitcom “Full House”, the character Jesse Katsopolis is played by John Stamos. Stamos reprises the role occasionally on the Netflix sequel “Fuller House”.

Versus (Vs.) is the Latin for “turned toward or against”.

The Faroe Islands (also Faeroe Islands) are a group of islands lying halfway between Scotland and Iceland. The Faroe Islands are part of the Kingdom of Denmark and were granted the power of self-governance in 1948.

Iggy Pop is a punk rock performer from Muskegon, Michigan. When he was in high school, he was a drummer for a local band called the Iguanas, and so was given the nickname “Iggy”. He was vocalist for a band called the Stooges.

By some accounts, a “banister” is a handrail of a stairway. By other accounts, the banister is actually the handrail and the supporting structures (called “newels”).

In the world of computing, a router is a device that helps direct traffic, as it were. A router in a house is often found in combination with a modem, and directs traffic between the Internet and the computers in the home.

Istanbul, Turkey is the only metropolis in the world that is situated in two continents. The city extends both on the European side and on the Asian side of the Bosphorus river. Historically, Istanbul was also known as Constantinople and Byzantium.

40. Diner call … and what the answer to each starred clue literally contains : ORDER UP!

Diner lingo, the verbal slang used by the staff, can be very colorful. Here are a few examples:

Chicle is a natural gum or latex that can be extracted from the Manilkara chicle tree that is native to Mexico and Central America. Companies like Wrigley were major users of chicle prior to the sixties as the product was used as the base ingredient in chewing gum. Today chewing gum manufacturers generally use a synthetic rubber that is cheap to manufacture as a replacement for natural chicle. I am so happy I don’t chew gum!

33. Land mentioned in the spiritual “Go Down, Moses” : EGYPT

11. Remove from consideration : RULE OUT

26. *Many a dorm accommodation : SHARED ROOM

40. Diner call … and what the answer to each starred clue literally contains : ORDER UP!