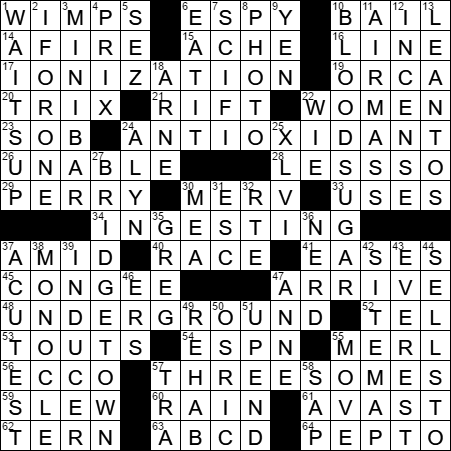 Today’s themed answers include two occurrences of SOME THREE-letter sequence, one at the start of the answer, and one at the end:

Our term “wimp”, describing a “timid person”, probably is an alteration of “whimper”, the sound that such an individual may make.

I used to live not far from Bryn-mawr (sometimes written as “Brynmwar”) in Wales, the town with the highest elevation in the country. Appropriately enough, “bryn mawr” is Welsh for “big hill”. There is also a Bryn Mawr in Pennsylvania (note the different capitalization) that is named after its Welsh counterpart. At the Pennsylvania location there’s a Bryn Mawr college, a private women’s school that was the first American university to offer graduate degrees to women.

Merv Griffin was quite the entertainer, truly a mogul in the business. He started his career as a singer on the radio during the big band era. In the sixties he hosted his own talk show, and then famously developed such great game shows as “Jeopardy!” and “Wheel of Fortune”.

Congee is an Asian dish, a gruel prepared by cooking rice in water for an extended period, long enough for the grains to practically disintegrate.

“Cruciverbalist” is a term developed in the 1990s to describe crossword enthusiasts. The word comes from the Latin for cross (crux) and word (verbum). “Cruciverbalist” is sometimes limited to those who actually construct the puzzles. Over on the other side of the Atlantic, we call such people “setters”.

I have to say, after owning several pairs, that ECCO shoes are the most comfortable in the world …

Terns are a family of seabirds. They are similar to gulls, but more slender and more lightly built. Many species of tern are known for their long-distance migrations, with the Arctic tern migrating so far that it is believed to see more daylight in a year than any other animal.

Incense is a plant material that gives off a pleasant-smelling smoke when burned. Examples of such material are camphor, frankincense, balsam, myrrh and sandalwood. The term “incense” describes the material that is burned, and not the smoke or aroma that is given off.

Kirk Alyn was the actor who played the title role in the first ever “Superman” movie, way back in 1948. Alyn reprised the role in a 1950 sequel called “Atom Man V. Superman”.

Super Bowl XLVI was played at the end of the 2011 season, with the New York Giants emerging victorious over the New England Patriots with a score of 21-17. MVP for the game was Giants quarterback Eli Manning.

Bridgetown is the largest city and capital of the island nation of Barbados. Barbados was uninhabited when the British landed there in 1625. Permanent English settlers established a settlement in the area now known as Bridgetown three years later, in 1628. The settlement had grown by the 1650s into what was called the Town of Saint Michael. The name changed to Bridgetown following the construction of a new bridge over the Constitution River that runs through the town in 1654. As an aside, Bridgetown was the only city that George Washington ever visited that was located outside of the United States.

MapQuest is a very popular Internet site, one that provides driving directions and maps. MapQuest has been owned by AOL since 2000. One nice feature of MapQuest is a page where gas prices are recorded by users, allowing others to find the lowest price in their area.

The character Greg Brady was the oldest Brady son in the sitcom “The Brady Bunch”. Greg was played by Christopher Daniel Barnes in the TV show. It was revealed in spin-offs of the original sitcom that Greg married a nurse and became an obstetrician.

Ambien is a brand name for the prescription drug Zolpidem. I have a friend who used to swear by it for helping cope with jet lag. I once had to deal with jet lag almost monthly and swear by the diet supplement melatonin, which you can buy over the counter here in the US. But, I am no doctor so don’t listen to anything I say …

A licensed practical nurse (LPN) might work in an operating room (OR), emergency room (ER) or an intensive care unit (ICU).

“Sap” is slang for a fool, someone easily scammed. The term arose in the early 1800s in Britain when it was used in “saphead” and “sapskull”. All these words derive from “sapwood”, which is the soft wood found in tree trunks between the bark and the heartwood at the center.

57. Each answer to a starred clue begins and ends with identical ones : THREESOMES