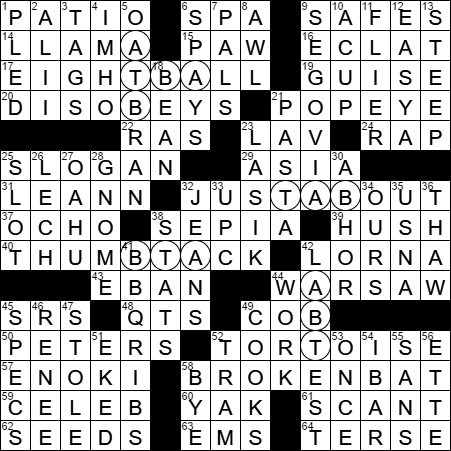 Each of today’s themed answers includes the hidden letter string BAT. However the order of the letters is BROKEN, changed:

Eight-ball and nine-ball are arguably the most popular variants of pool played in North America. In eight-ball, one player sinks the striped balls, and the other the solid balls. The first to sink all his or her balls, and then the black 8-ball, without fouling wins the game. In nine-ball, each player must hit the lowest numbered ball on the table first with the cue ball. The first player to sink the 9-ball wins. Sinking the nine ball can happen when first hitting the lowest bowl on the table, or possibly when balls numbered 1-8 have been sunk.

A rap sheet is a criminal record. “Rap” is a slang term dating back to the 1700s that means “blame, responsibility” as in “to take the rap” and “to beat the rap”. This usage morphed into “rap sheet” in the early 1900s.

The Great Wall of China is a series of fortifications that was built and rebuilt over the centuries to protect the northern borders of the Chinese Empire. Most of the existing wall was reconstructed during the Ming Dynasty. This Ming wall is about 5,000 miles long. There is an urban myth that the Great Wall is visible from the Moon, or from space. NASA has shown that the Great Wall can only be discerned from low Earth orbit (about 100 miles), and that is no more or less visible than any other man-made structure.

LeAnn Rimes has been a country music star since she was 13 years old. In 2008 she disclosed publicly that she suffered from the autoimmune disease psoriasis. She has been active since then in raising money to fight the disease and helping fund cancer research as well. So, not only did Rimes win three Grammy Awards in 1997, she also won a 2009 Humanitarian Award from the Academy of Country Music.

Sepia is that lovely rich, brown-grey color so common in old photographs. “Sepia” is the Latinized version of the Greek word for cuttlefish, as sepia pigment is derived from the ink sac of the cuttlefish.The “sepia tone” of old photographs is not the result of deterioration over time. Rather, it is the result of a deliberate preservation process which converts the metallic silver in the photographic image to a more stable silver sulfide. Prints that have been sepia-toned can last in excess of 150 years.

The capital city name “Warsaw” in Polish means “belonging to Warsz”. Legend has it that Warsz, was a fisherman who fell in love with a mermaid called Sawa. It’s a nice story, but actually Warsz was a nobleman from the 12th or 13th century who owned a local village.

The unit of volume “quart” is so called because it is one quarter of a gallon.

Bernadette Peters is perhaps best known as a Broadway actress, and in particular for her performances in works by Stephen Sondheim. Off the stage and screen, Peters was noted for her 4-year relationship with Steve Martin in the seventies.

“Into the Woods” is Stephen Sondheim musical that premiered in 1986. The storyline uses characters from several fairy tales, including “Little Red Riding Hood”, “Jack and the Beanstalk”, “Rapunzel” and “Cinderella”. The borrowed characters are held together with an underlying original tale about a baker and his wife who long to have a child, but cannot due to a curse placed on them by a witch.

Andrés Segovia was a classical guitar player from Andalusia in Spain.

Tortellini are stuffed pasta that are ring-shaped, or navel shaped. In fact tortellini can also be called “umbellico”, the Italian for “belly button”.

President James Earl “Jimmy” Carter (JEC) is a graduate of the US Naval Academy (USNA). Carter served in the Navy on surface ships and submarines, and chose to pursue a career in the submarine service as he was interested in nuclear power and believed it had a great future in submarine design. As a result, he became an expert in nuclear propulsion. In 1952, the Navy sent the young Carter to the Chalk River Laboratories in Canada to lead the US effort to shutdown the reactor after an accident and partial meltdown of a reactor core. He and his team had to be lowered into the leaking reactor core for mechanical disassembly, staying there for only seconds at a time to minimise exposure to radiation. Decades later as US President, it was this experience that influenced Carter’s decision not to complete the development of the neutron bomb.

Renée Zellweger’s big break came in the 1996 movie “Jerry Maguire”. A few years later, Zellweger followed that up with a string of successes in “Bridget Jones Diary” (2001), “Chicago” (2002) and “Cold Mountain” (2003). My wife and I love watching her play Bridget Jones, and as someone coming from the British Isles, I have to say that Zellweger does a remarkable job with the accent. She worked hard to perfect that accent, and of course she had a voice coach. She also went “undercover” and worked as a temp in an office for three weeks fine-tuning her skills.

20. Sneaks out after being grounded, say : DISOBEYS

58. Cause of wood splinters in the infield … and what each set of puzzle circles represents : BROKEN BAT