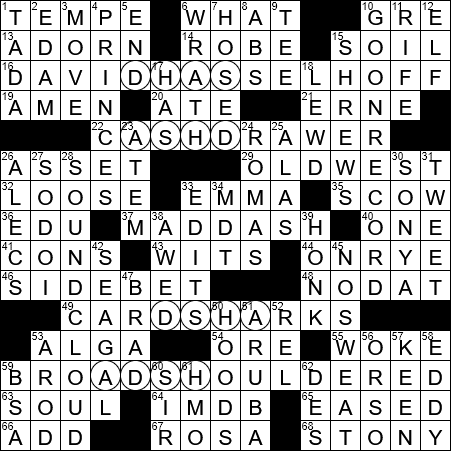 Today’s themed answers each contain a string of circled letters. Those letters are D-A-S-H, but rearranged, in a “MAD” order:

Actor and singer David Hasselhoff has appeared on many hit TV shows, including “The Young and the Restless”, “Knight Rider”, “Baywatch”, “Dancing with the Stars” and “America’s Got Talent”. According to “The Guinness Book of Records”, Hasselhoff is the most-watched man on TV, ever. Albeit, not by me …

A “ledger” is an account book. The name comes from the Middle English “leggen” meaning “to lay”. The original ledger was a large book “laid” in one particular place permanently, an example being a breviary in a church.

“Horse opera” is a slang term for a western movie or show.

“La La Land” is a 2016 romantic musical film starring Ryan Gosling and Emma Stone as a musician and actress who fall in love in “La La Land” (Los Angeles, i.e. “LA”). The film was written and directed by Damien Chazelle, who had found success two years earlier with the musical drama “Whiplash”. “La La Land” won a record-breaking seven Golden Globes and tied for the record number of Oscar nominations at fourteen, winning six.

44. How pastrami is often ordered : ON RYE

In American football, linemen specialize in playing in the line of scrimmage. That’s about all I know, and even that I am unsure about …

The British laws of royal succession changed in 2013. The centuries old law dictated that males in a family were ranked higher than all females, regardless of age. The current line of succession is:

Shrews are mammals that look like small moles or long-nosed mice. They are the only terrestrial mammals that are known to echolocate, using a series of ultrasonic squeaks to examine their nearby surroundings.

The Roma tomato isn’t considered an heirloom variety, but it is very popular with home gardeners, especially those gardeners that don’t have a lot of space. It is a bush type (as opposed to vine type) and needs very little room to provide a lot of tomatoes.

Apparently the original “smart Alec” (sometimes “Aleck”) was Alec Hoag, a pimp, thief and confidence trickster who plied his trade in New York City in the 1840s.

Soundcloud is a German company that allows users to upload and share audio files online, with most of the distributed content being music. Based in Berlin, the website was launched in 2008 by two Swedish entrepreneurs.

Billings is the only city in Montana with a population greater than 100,000 people. It was founded as a railroad town in 1882 and experienced such rapid growth that it was nicknamed the Magic City. The town’s name was chosen in honor of a former president of the Northern Pacific Railroad, Frederick H. Billings.

Steven Seagal is known in the US as a martial artist turned actor. Seagal started his career as an Aikido instructor in Japan and was the first foreigner to operate an Aikido dojo in that country.

“The Patriot” is a 1998 action film starring Steven Seagal. The movie is based on a 1974 sci-fi novel by William C. Heine. Haven’t seen it …

Originally, a “seminary” was where plants were raised from seeds, as “semen” is the Latin for “seed”. The first schools labelled as seminaries were established in the late 1500s. Those first schools were more likely to be academies for young ladies back then, rather than for trainee priests.

53. Former Yankee who was the youngest MLB player to hit 600 home runs : A-ROD

44. How pastrami is often ordered : ON RYE

53. Former Yankee who was the youngest MLB player to hit 600 home runs : A-ROD