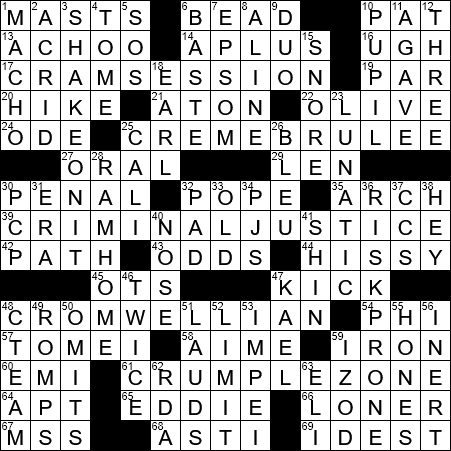 Today’s themed answers start with the letters CRxM, with “x” progressing through the vowels from the top of the grid to the bottom:

A brig, short for brigantine, is a two-masted sailing vessel. It was the use of brigantines as prison ships that led to use of “brig” as the word for a jail or prison cell on a seagoing vessel.

The term “martini” probably takes it name from the “Martini & Rossi” brand of dry vermouth, although no one seems to be completely sure. What is clear is that despite the Martini name originating in Italy, the martini drink originated in the US. The original martini was made with gin and sweet vermouth, but someone specifying a “dry” martini was given gin and dry vermouth. Nowadays we use dry vermouth for all martinis and the term “dry” has become a reference to how little vermouth is included in the drink. Famously, Noel Coward liked his drink very dry and said that a perfect martini is made by “filling a glass with gin then waving it in the general direction of Italy”. The German-American journalist and satirist H. L. Mencken referred to the martini as “the only American invention as perfect as a sonnet”.

“Ode on Indolence” was one of the so-called “1819 Odes” written by the poet John Keats, a collection that included famous poems such as “Ode on a Grecian Urn”, “Ode to a Nightingale” and “Ode to Psyche”.

Len Dawson is a retired AFL-NFL quarterback who played for the Kansas City Chiefs (originally the Dallas Texans).

A “bulla” (also “bull”) is a type of seal impression. A Papal Bull is a formal document from the Vatican that has such a seal attached, hence the name of the document.

39. Course of study that may include forensics : CRIMINAL JUSTICE

Oliver Cromwell played a unique role in British history, ruling the nation as Lord Protector from 1653 to 1658. Cromwell basically had the same powers as a monarch, but he had no crown. Known by many as “Old Ironsides”, Cromwell fought in the English Civil War on the side of the Roundheads (the Parliamentarians) against the Cavaliers (the Royalists). The Parliamentarians emerged victorious, King Charles I was executed, and a few years later, Cromwell came to power. The monarchy was restored in 1658 after the Cromwell died, and Charles II was installed on the throne.

Phi is the 21st letter of the Greek alphabet.

Marisa Tomei’s first screen role was in the daytime soap “As the World Turns”, but her break came with a recurring role in “The Cosby Show” spinoff “A Different World”. Tomei won an Oscar for her delightful performance in “My Cousin Vinny” in 1992.

“Spider-Man: Homecoming” is a 2017 superhero film. It is a “reboot” of the “Spider-Man” series, introducing a new storyline, and new actors to play the main characters. English actor Tom Holland has the title role of Peter Parker/Spider-Man, with Marisa Tomei playing Peter’s Aunt May Parker.

Eddie Izzard is a remarkable British stand-up comedian and actor. Famously, Izzard is a transvestite and used to perform stand-up in women’s clothing and makeup, although he tends to perform in “boy-mode” these days. In 2009, Izzard decided to run back-to-back marathons to raise money for charity, despite having no real history of running. He trained for five weeks, and then ran the equivalent of an incredible 43 marathons in 51 days, covering more than 1,100 miles all over the UK and raising over $300,000.

A man described as “macho” shows pride in his masculinity. “Macho” is a Spanish word for “male animal”.

“Vir” is the Latin word for “man” and is the root of our word “virile”, for example, meaning “manly”.

18. Rank between marquis and viscount : EARL

“Lunatic” is an adjective that is now considered offensive. The term arose in the late 1400s when it meant “affected with periodic insanity”, insanity attacks brought on by the cycles of the moon. “Lunatic” comes from the Latin “luna” meaning “moon”.

Being a bit of a French speaker (admittedly a very poor one), the term “bleu” cheese has always kind of irritated me. I would prefer that we use either “blue cheese” or “fromage bleu” and not mix the languages, but then I can be annoyingly picky! It’s said that blue cheese was probably discovered accidentally, as molds tend to develop in the same conditions that are best for storing cheese. The blue mold in the cheese is introduced by adding Penicillium spores before the cheese is allowed to set. And yes, it’s the same mold that is used to produce penicillin, the antibiotic.

Old Navy is a store brand founded and owned by The Gap. The name Old Navy was taken from the Old Navy Cafe in Paris.

Fluids in an IV (intravenous drip) might be measured in ccs (cubic centimeters).

The Macau Science Center is a landmark building in Macau, China that was completed in 2009. The building was designed in association with I. M. Pei, and has a distinctive asymmetric conical shape with a wraparound spiral walkway.

René Lacoste was a French tennis player who went into the clothing business, and came up with a more comfortable shirt that players could use. This became known as a “tennis shirt”. When it was adopted for use in the sport of polo, the shirts also became known as “polo shirts”. And then the “golf shirt” is basically the same thing.

Eli Broad made his fortune in real estate and was one of the founders of Kaufman and Broad, that we know these days as KB Homes. Broad’s net worth was recently reported at just over $5 billion.

39. Course of study that may include forensics : CRIMINAL JUSTICE

18. Rank between marquis and viscount : EARL