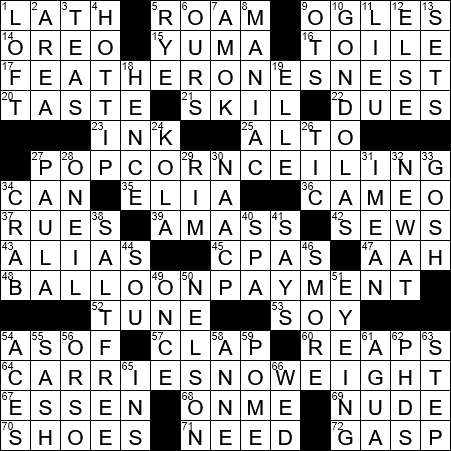 Each of today’s themed answers starts with something that CARRIES NO WEIGHT, or very little!

15. Arizona county or its seat : YUMA

Toile fabric can be used as upholstery, or as a wallpaper, or even as a fabric for clothing.

The Skil Power Tools company sold its first “Skilsaw” back in 1924, for $160. Despite almost a century of inflation, a Skilsaw can be purchased today for a fraction of that original price.

A tenor is a male with a singing voice higher than a countertenor, and lower than a baritone. “Tenor” comes from the Latin “tenere” meaning “to hold”. The term is rooted in medieval polyphonic music, when it described the voice that sang (held) the sustained melody, around which all other voices were arranged.

Even in my day, a cameo role was more than just a short appearance in a movie (or other artistic piece). For the appearance to be a cameo, the actor had to playing himself or herself, and was instantly recognizable. With this meaning it’s easy to see the etymology of the term, as a cameo brooch is one with the recognizable carving of the silhouette of a person. Nowadays, a cameo is any minor role played by a celebrity or famous actor, regardless of the character played.

A balloon payment is a large payment made at the end of a loan. Balloon payments usually aren’t a good idea as the later one makes payments, the more interest accrues.

Tofu is another name for bean curd, and is a Japanese word meaning just that … bean that has “curdled”. Tofu is produced by coagulating soy milk, using either salt or something acidic. Once the protein has coagulated, the curds are pressed into the familiar blocks. Personally I love tofu, but my wife, she absolutely hates it …

“Digs” is short for “diggings” meaning “lodgings”, but where “diggings” came from, no one seems to know.

“Maniac” is a hit song written for the 1983 movie “Flashdance”. It was performed and co-written by Michael Sembello. Paramount Pictures executives asked Sembello for songs to potentially include in the film. Sembello’s wife included “Maniac” on the tape by accident.

“Flashdance” is a 1983 romantic drama film about a young welder at a steel plant who aspires to become a professional dancer. The movie’s soundtrack was also a big hit and features songs like “Maniac” and “Flashdance… What a Feeling”. The latter was performed by Irene Cara, and won the Best Original Song Oscar for that season.

Roger O’Neil is a news reporter who has been working for NBC for over 30 years.

The full name of the NAACP, the National Association for the Advancement of Colored People, is remarkable in that it actually still uses the offensive term “colored people”. The NAACP was founded in 1909, by a group that included suffragette and journalist Mary White Ovington, wealthy socialist William English Walling, and civil rights activist Henry Moscowitz. Another member of the founding group was W. E. B. Du Bois, the first African-American to earn a doctorate at Harvard University. The date chosen for the founding of the NAACP was February 12th, 1909, the 100th anniversary of the birth of President Abraham Lincoln, the man most visibly associated with the emancipation of African-American slaves.

Sodium is a mineral that plays an essential role in the body, and has a major impact on blood volume and blood pressure. There seems to be a lot of evidence that the typical American diet includes levels of sodium that above the maximum considered healthy by the medical community. Apparently, most of the sodium in the typical diet comes from processed food.

State Farm started out in 1922 as an auto insurance company specializing in providing insurance for farmers, hence the name. The jingle the company uses, “Like a good neighbor, State Farm is there”, was written in 1971 by Barry Manilow.

9. Performs a full-body scan on? : OGLES

15. Arizona county or its seat : YUMA