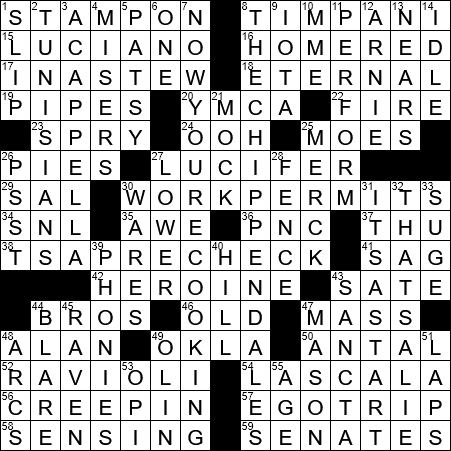 The timpani are also called the kettledrums. “Timpani” is an Italian term with the same meaning as in English, the plural of “timpano”.

Luciano Pavarotti has to have been one of the most celebrated tenors of all time. He was able to appeal to audiences beyond the traditional fans of opera, helped by his performances with the Three Tenors: Pavarotti, Placido Domingo and Jose Carreras. Pavarotti made his final performance on stage at the 2006 Winter Olympics in Turin, Italy, where he sang his famous rendition of the moving aria “Nessun dorma” and brought the house down. Pavarotti passed away from pancreatic cancer the following year, at the age of 71.

Plácido Domingo is a Spanish tenor, from Madrid. Famously, Domingo was one of the Three Tenors, the performing trio that brought classical arias to the masses. The other two “Tenors” were fellow-Spaniard José Carreras and Italian Luciano Pavarotti.

“The Simpsons” television show is meant to be set in “anytown, USA”. The creators chose the name “Springfield”, as it is one of most common town and city names in the country.

Due to the difference in orbit between the Earth and Venus, Venus appears in the night sky sometimes after sunset, and sometimes just before sunrise. Ancient civilization perceived this light in the sky as two different entities, labelling one appearance as the “evening star”, and one as the “morning star”. Ancient Romans named the evening star “Vesper” (from the Greek for “evening”), and the morning star “Lucifer” (from the Greek for “light bringer”).

PNC Park is the home to the Pittsburgh Pirates baseball team. The park is sponsored by PNC Financial Services, the sixth largest bank in the US, and founded and based in Pittsburgh.

The Transportation Security Administration operates its a precheck program known as “TSA Pre✓”. Members of the program receive expedited screening at airports at most airports. In order to become a member, a traveler must apply online, appear in person at a designated office for a background check and fingerprinting, and pay a fee for a 5-year membership.

La Scala Opera House opened in 1778. It was built on the site of the church of Santa Maria della Scala, which gave the theater its name: “Teatro alla Scala” in Italian.

The term “Arab Spring” has been applied to the wave of protests, riots and civil wars that impacted the Arab world for 2010 to 2012. The uprisings were sparked by the Tunisian Revolution at the end of 2010 that led to the ouster of the longtime president and the institution of democratic elections. The period of instability that followed in some Arab League countries has been dubbed the “Arab Winter”.

GoFundMe is what is known as “crowdfunding” website, based in San Diego.

Chippendales is a big touring operation featuring exotic male dancers. The original Chippendales was a nightclub in Los Angeles in the early eighties. The establishment’s name was inspired by the Chippendale-style furniture used in the club.

Jack Nicklaus is a professional golfer from Columbus, Ohio. Nicknamed “the Golden Bear”, Nicklaus holds the record for winning the most major championships (18). Tiger Woods is in second place, having won 14 to date.

The verb “to hawk” has a Germanic origin, from the Low German word “hoken” meaning “to peddle”. A hawker is actually slightly different from a peddler by definition, as a hawker is a peddler that uses a horse and cart, or a van nowadays perhaps, to sell his or her wares.

Suge Knight is a record producer, and the co-founder of the record company Death Row Records. Early in his career, Knight played two NFL games for the LA Rams, albeit during the 1987 NFL players’ strike. Knight has been involved in many violent incidents, and has spent time in jail. In 2014, he was shot six times at a party, but survived. Knight was arrested and charged with murder in 2015 after a hit-and-run incident that left one of Knight’s friends dead and another seriously injured.

“The Unbearable Lightness of Being” is a 1988 big screen adaptation of a 1984 novel of the same name by Milan Kundera. Starring Daniel Day-Lewis and Lena Olin, the film explores the complicated relationship of two couples living in Prague in 1968. That was the year of the Prague Spring, the brief period of political liberalization under Communist Party leader Alexander Dubček. It was also the year of the invasion of Czechoslovakia by Warsaw Pact countries in response to Dubček’s reforms.