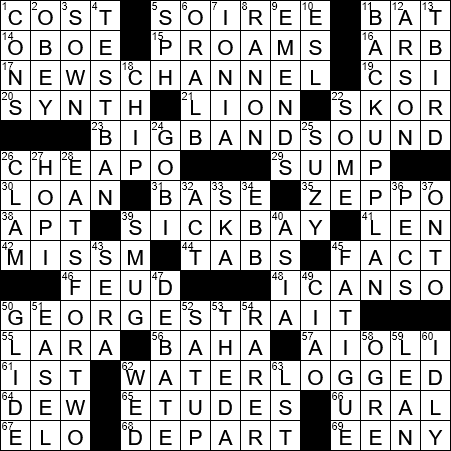 Each of today’s themed answers ends with a “watery” geographic feature, a feature that is WATERLOGGED:

“Arb” is short for an arbitrageur, one who profits from the purchase of securities in one market and the subsequent sale in another, hence taking advantage of price discrepancies across markets.

In the sixties, Robert Moog invented the Moog Synthesizer, an electronic device that he used to produce music. I used to own a few of his albums, including a Moog version of Mussorgsky’s “Pictures at an Exhibition”. What a great performance that was …

Skor is a candy bar produced by Hershey’s. “Skor” is Swedish for “shoes”, and the candy bar’s wrapping features a crown that is identical to that found in the Swedish national emblem. What shoes have to do with candy, I don’t know …

Famously, Glenn Miller signed up with the US Air Force Band during World War II, and disappeared while flying from the South of England to entertain troops that had just liberated Paris. Miller is still listed as missing in action …

Tommy Dorsey was a jazz trombonist and bandleader in the Big Band era, and the younger brother of bandleader Jimmy Dorsey. One of Tommy’s singers was Frank Sinatra, whom he hired from bandleader Harry James in 1940. Sinatra claimed that he learned breath control from watching Tommy Dorsey play the trombone.

Chintz is a calico fabric that is very florid, and which originated in India. Indian chintz was in such great demand in Europe in the 17th-century, and so much was sold, that both England and France banned its import. This contributed to the term “chintz” being applied derogatively to a fabric, and from there to anything cheap or gaudy.

“Zeppo” was the stage name of Herbert, the youngest of the five Marx Brothers. Although Zeppo appeared in the first five Marx Brothers movies, always playing the straight man and the romantic lead. After he quit acting, Zeppo owned a company called Marman Products, and developed what’s known today as the Marman Clamp. Marman clamps were used to secure the first atomic bombs used by the US military. They are still used today in spaceflight systems.

I used to walk my dog right past author Len Deighton’s house years ago, as we lived in the same village in Ireland (probably my only claim to “fame”). Deighton wrote the excellent espionage thriller “The IPCRESS File”, made into a 1965 movie starring Michael Caine.

The Baha Men are so called because they hail from the Bahamas. Their big hit was “Who Let the Dogs Out?” That song ranked as third in a list of the world’s most annoying songs!

The term “waterlog” was coined in the 1750s, when it described a ship that had taken on so much water that she was barely afloat. The vessel was uncontrollable, and behaved like a “log” floating on the surface of the “water”.

A convict (con) might be incarcerated in the penitentiary (pen).

Lydia and Ionia were ancient territories in a part of the world now covered by modern-day Turkey. Both territories eventually fell under Greek and then Roman rule.

Suzy Parker was a remarkably successful model who was at the height of her career in fifties. Reportedly, she was the first fashion model to earn over $100,000 in a year, and the first to appear in a bikini in an American magazine. Parker also had an acting career, and appeared opposite Cary Grant in the 1957 comedy “Kiss Them for Me”. She also has a Beatles song named for her. Although “Suzy Parker” was never released, the Beatles perform it in the 1970 documentary film “Let It Be”.

26. Mollusk in a red or white linguine sauce : CLAM

The musical style known as calypso originated in Trinidad and Tobago, but there seems to be some debate about which influences were most important as the genre developed. It is generally agreed that the music was imported by African slaves from their homeland, but others emphasize influences of the medieval French troubadours. To me it sounds more African in nature. Calypso reached the masses when it was first recorded in 1912, and it spread around the world in the thirties and forties. It reached its pinnacle with the release of the famous “Banana Boat Song” by Harry Belafonte.

Blood serum (plural “sera”) is the clear, yellowish part of blood i.e. that part which is neither a blood cell or a clotting factor. Included in blood serum are antibodies, the proteins that are central to our immune system. Blood serum from animals that have immunity to some disease can be transferred to another individual, hence providing that second individual with some level of immunity. Blood serum used to pass on immunity can be called “antiserum”.

Theda Bara was a silent film star from Cincinnati, Ohio. Many cite Bara as the first movie sex symbol. She wore very revealing costumes in many of her films and she often played the femme fatale character. As such, Bara’s nickname was “the Vamp”.

“LST” stands for Landing Ship, Tank. LSTs were the large vessels used mainly in WWII that had doors at either ends through which tanks and other vehicles could roll off and onto beaches. The design concept persists to this day in the huge fleet of commercial roll-on/roll-off car ferries, all inspired by the LST.

26. Mollusk in a red or white linguine sauce : CLAM