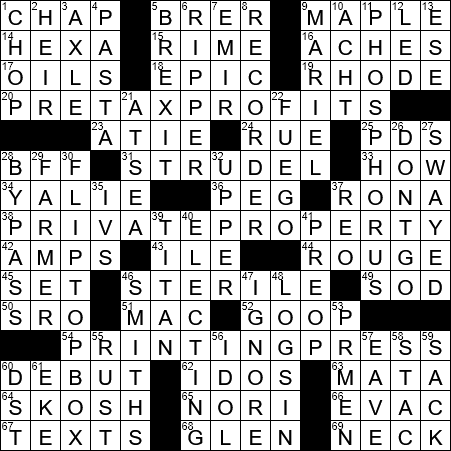 Today’s puzzle might have been created by PR MEN. Each of our themed answers comprises two words, each beginning with the letters PR:

Rona Barrett is a gossip columnist originally from New York City but who plies her trade in Southern California. Barrett started out as with a gossip column that was syndicated in newspapers but then made a successful transition to television. She made regular appearances in news broadcasts and on her entertainment shows in the sixties and seventies.

The printing press was invented in the mid-15th century by German goldsmith Johannes Gutenberg. Books were printed prior to the invention of the press, but the techniques used were clumsy and slow. Gutenberg introduced the concept of movable, reusable type, which revolutionized book production. Fifty years after the introduction of Gutenberg’s press, over twenty million volumes had been produced in Western Europe.

Rotini is the corkscrew-shaped pasta that is often used in pasta salads. Even though “rotini” sounds like it comes from a word meaning “twist, rotate”, the word “rotini” doesn’t exist in Italian other than as the name for the pasta.

The UK held a referendum in June 2016 in which 52% of voters chose to leave the European Union (EU). The term “Brexit” was used for the vote, a portmanteau of “Britain” and “exit”. The vote has led to some debate about the future of the UK. The Scottish electorate voted for the UK to stay in the EU, and so that revived speculation about Scotland leaving the UK. There’s also some discussion about Northern Ireland’s future in the UK, as the Northern Irish electorate also voted to stay in the EU.

Jack the Ripper was one of the names given to a serial killer who terrorized the Whitechapel district of London in 1888. The murders were particularly gruesome, and were all directed towards female prostitutes that worked in the area. The victims had their throats cut and then had their abdominal organs mutilated and sometimes removed. Eleven women were killed, and the murderer was never apprehended.

The recorder is a woodwind instrument with a whistle mouthpiece. I have to admit to a negative impression of the recorder, as it’s the instrument that so many kids have to learn on the other side of the Atlantic. I’ve heard way too many school recitals featuring banks of recorders …

The actress Mariel Hemingway is a granddaughter of the famed author Ernest Hemingway. She was given the name “Mariel” because her father and grandfather used to fish together from the Cuban village of Mariel.

Phosphorus is the chemical element denoted on the periodic table with the symbol P. White phosphorus reacts with oxygen in moist air to produce a green glow, in a process known as chemiluminescence. This chemical process used to be called phosphorescence, although this term is now reserved for a glow after illumination. The glow of phosphorus is the result of a chemical reaction and doesn’t rely on illumination, and so cannot be referred to as phosphorescence. Got that …?

The Caribbean Sea takes its name from the Carib people. The Caribs are an American Indian people that live in the Lesser Antilles islands, part of the West Indies.

Michigan is the only US state that comprises two peninsulas. The Lower Peninsula is mitten-shaped, and it is separated from the Upper Peninsula by the Straits of Mackinac. My wife is from the “U.P”, and is proud to call her herself a Yooper (from “UPer”).

66. Getting people out of harm’s way, for short : EVAC

3. Rod on which wheels turn : AXLE

48. Begins a computer session : LOGS IN