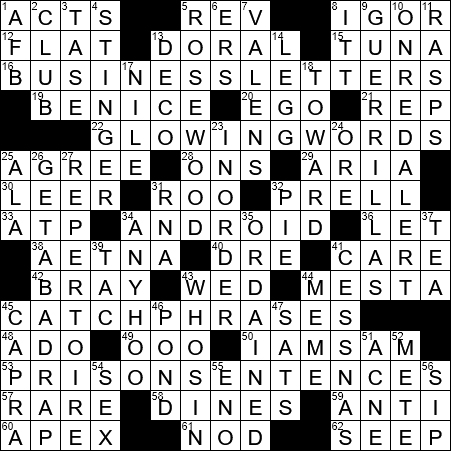 The term “ballet” came into English via French from the Latin “ballare” meaning “to dance”.

The lab assistant named Igor has turned up in many movies in recent decades, usually appearing as the aide to Dr. Frankenstein. Paradoxically, in Mary Shelley’s original novel, Frankenstein had no assistant at all. Further, the lab assistant introduced in 1931 in the first of the “Frankenstein” series of movies was named Fritz. Bela Lugosi played a character named Ygor in “Frankenstein” sequels in 1939 and 1946, but he was a blacksmith and didn’t work in the lab.

The Doral Golf Resort in Doral, Florida has five championship golf courses, including one called the Blue Monster.

Like most of the characters in A. A. Milne’s “Winnie the Pooh”, the kangaroo named Roo was inspired by on a stuffed toy belonging to Milne’s son Christopher Robin.

Prell shampoo was introduced by Procter & Gamble in 1947. Back then it was a clear green concentrate sold in a tube (like toothpaste).

“Never Let Me Go” is a 2005 novel by Japanese-born British writer Kazuo Ishiguro (who also penned the celebrated work “The Remains of the Day”). “Never Let Me Go” is a piece of science fiction that follows the lives of a woman and two of her childhood friends. The three discover that they are clones who have been bred to provide vital organs for “normal” people when required.

Perle Mesta was a socialite and fundraiser for the Democratic Party. She was made U.S. ambassador to Luxembourg in 1949. Mesta was played by Ethel Merman in the movie titled “Call Me Madam”.

I “caught” your meaning.

T206 is a series of tobacco cards that was issued by the American Tobacco Company from 1909 to 1911. The series is famous among collectors of baseball cards due to its extreme rarity. The T206 Honus Wagner card is the most valuable baseball card in existence, with examples routinely fetching hundreds of thousands of dollars in auctions.

The fingerboard (also “fretboard”) of stringed instruments is usually made from a long strip of hardwood, often ebony or rosewood.

Ritchie Valens was a pioneer in the world of rock & roll and in Chicano rock in particular. Sadly, his recording career lasted less than a year, as Valens was killed in a plane crash in 1959, on “the Day the Music Died”. That plane crash in Iowa also claimed the lives of Buddy Holly and The Big Bopper (JP Richardson).

“La Bamba” is a folk song from Veracruz, Mexico that became a huge hit for Ritchie Valens in 1958. The most notable cover version of the Valens hit was recorded by Los Lobos in 1987 as the title track of 1987 movie “La Bamba”.

Art deco is the name given to a style of design and architecture of the 1920s that actually had its roots in Belgium and then spread throughout Europe before arriving in North America. Celebrated examples of art deco architecture are the magnificent Chrysler Building in New York City completed in 1930, and the GE Building that sits in the middle of Rockefeller Center also in New York City, with the address of “30 Rock”.

A “caddy” is a container used for tea. “Caddy” comes from the Malay word “kati”, a unit of weight used as a standard by British tea companies in the East Indies.

Talking Heads was a New Wave band from New York City that formed in 1974 and was active until 1991. To be honest, I couldn’t name one of their songs …

3. Subdue with a charge : TASE

11. Speaks with a scratchy voice : RASPS