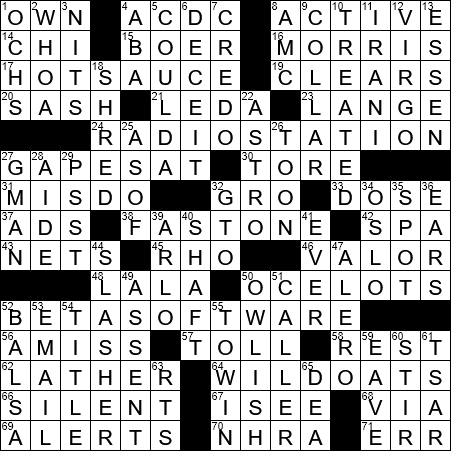 Each of today’s themed answers includes the letters string OATS, although the string has “WILD”. The letters in the word OATS have been rearranged:

Morris the Cat has appeared in movies and advertisements since 1968. Morris is currently the mascot for 9Lives cat food.

A movable (up and down) window frame is called a sash, from the French word for a frame “châssis”. The term is also applied to that part of a door or window into which windows are set.

“Feud” is a TV series that dramatizes actual events in celebrity feuds. The first season debuted in 2017 and explored the rivalry of Hollywood superstars Bette Davis and Joan Crawford (portrayed by Susan Sarandon and Jessica Lange). A second season takes on the relationship between Charles and Diana, the Princess and Princess of Wales.

Scotts Miracle-Gro Company was founded in 1868 by one Orlando Scott, initially selling seed to the agricultural industry. In the early 1900s, Scotts started to sell to homeowners, mainly supplying lawn seed. The company merged with the gardening company Miracle-Gro in 1955.

As in tennis, for example.

The ocelot is found mainly in South and Central America, although there have been sightings as far north as Arkansas. An ocelot doesn’t look too different from a domestic cat, and some have been kept as pets. Perhaps most famously, Salvador Dali had one that he carried around everywhere with him.

The sets of five horizontal lines and four spaces that are used in musical notation are known as staves. The singular of “staves” is “staff” in American English, but “stave” in British English.

Traditionally, wild oats was a crop that one would regret sowing instead of “good grain”. Young and tempestuous people were rash enough to sow their wild oats, and had yet to comprehend their folly. Over time, to “feel one’s oats” came to mean “be lively and confident”.

The sport of drag racing is administered by the National Hot Rod Association (NHRA).

Asghar Farhadi is an Iranian movie director and screenwriter. Farhadi won the Oscar for Best Foreign Language Film on two occasions: for his movies “A Separation” (2012), and “The Salesman (2017).

The Norwegian Wood music festival has been held annually since 1992 in Oslo, the capital of Norway. The festival is named for the Beatles song “Norwegian Wood (This Bird Has Flown)”.

In American football, linemen specialize in playing in the line of scrimmage. RT stands for Right Tackle. That’s about all I know, and even that I am unsure about …

8. Unlike a couch potato : ACTIVE

27. Regards with surprise : GAPES AT