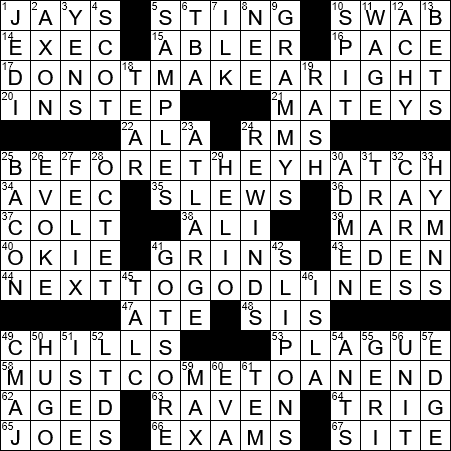 Each of today’s themed clues gives just the initial letters at the start of a well-known adage. The corresponding answer is the end of that adage, with all words spelled out fully:

A sting operation often involves a law enforcement officer operating undercover, and is designed to catch a person in the act of committing a crime.

The instep is in the middle of the human foot, right in front of the ankle. The term can also apply more specifically to the upper surface of that part of the foot.

38. Fighter eulogized by Bill Clinton, among others : ALI

The old adage “Cleanliness is next to godliness” is said by some to have originated in ancient Hebrew writings. However, an alternative view is that the first version of the expression is found in a 1605 book by English philosopher Francis Bacon entitled “The Advancement of Learning”. In Bacon’s words, “Cleanness of body was ever deemed to proceed from a due reverence to God.”

According to the biblical Book of Exodus, God inflicted ten plagues on Egypt to persuade the Pharaoh to release the Israelites from bondage. For example, the first was the changing of water in the Nile to blood, the eighth was a plague of locusts that consumed all the Egyptian crops, and the tenth was the death of firstborn sons.

63. One “sitting lonely on the placid bust,” in a classic poem : RAVEN

Here are some lines from “The Raven”, Edgar Allan Poe’s narrative poem:

But the Raven, sitting lonely on the placid bust, spoke only
That one word, as if his soul in that one word he did outpour.
Nothing further then he uttered – not a feather then he fluttered –
Till I scarcely more than muttered “Other friends have flown before –
On the morrow he will leave me, as my hopes have flown before.”
Then the bird said “Nevermore.”

Sir Georg Solti was a great Hungarian-British conductor, who spent 22 years as music director of the Chicago Symphony, one of many prestigious positions he held in the world of classical music and opera. Solti was awarded 31 Grammy Awards, the most won by any individual in any genre of music. I think it’s kind of cool that Solti’s name comprises two notes in the solfa scale: sol-ti …

Ty Cobb’s first cousin, Robert H. Cobb, owned the Brown Derby chain of restaurants. One of his regular customers was the famous Sid Grauman, who ran Grauman’s Chinese Theater. Late one night, Grauman asked for a snack, and Cobb came up with a chopped salad simply made from ingredients he happened to have in the refrigerator. Grauman liked it so much that continued to request it, and the Cobb salad was born.

Felix Mendelssohn was a German composer who was active in the early Romantic period. Mendelssohn’s most famous works are probably his overtures “A Midsummer Night’s Dream” and “The Hebrides”, as well as his “Italian Symphony” and “Scottish Symphony”.

Victor Hugo was a French poet and playwright, known in his native country mainly for his poetry. However, outside of France, Hugo is perhaps more closely associated with his novels such as “Les Misérables” and “The Hunchback of Notre-Dame”.

The five members of the English pop group the Spice Girls are:

I best know the actress Eva Mendes as the female lead in the movie “Hitch”, playing opposite Will Smith. Mendes was known off the screen for dating actor Ryan Gosling from 2011 to 2013.

Pro tempore can be abbreviated to “pro tem” or “p.t.” “Pro tempore” is a Latin phrase that best translates as “for the time being”. It is used to describe a person who is acting for another, usually a superior. The President pro tempore of the US Senate is the person who presides over the Senate in the absence of the Vice President of the US. It has been tradition since 1890 that the president pro tem is the most senior senator in the majority party. The president pro tem ranks highly in the line of succession to the presidency, falling third in line after the Vice President and the Speaker of the House.

16. Walk without getting anywhere? : PACE

38. Fighter eulogized by Bill Clinton, among others : ALI

63. One “sitting lonely on the placid bust,” in a classic poem : RAVEN

24. Backs up a videotape : REWINDS

41. Reacted to an arduous workout : GOT SORE