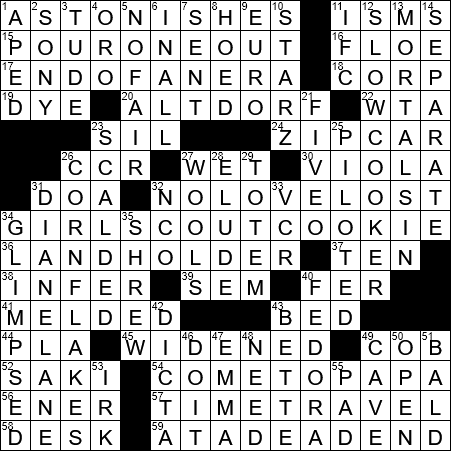 Back in the 14th century libation was the pouring of wine in the honor of a god. The term comes from the Latin word “libare”, which basically means the same thing. Nowadays we tend to use “libation” as a somewhat ornate word for a drink.

Supposedly, William Tell came from Uri, a canton in the German part of Switzerland. Altdorf is the capital of Uri and is the city where William Tell shot the apple off his son’s head, at least according to legend. There is a bronze statue of Tell that was erected in the city’s marketplace in 1895 to memorialize the event.

RSVP stands for “répondez s’il vous plaît”, which is French for “answer please”.

Zipcar is a carsharing company. Carsharing differs from car rental in that cars are available only to members, but 24 hours a day as opposed to office hours. There are other differences, including the fact that members are usually responsible for leaving cars gassed up and clean for the next user.

“Born of the Bayou” is a Creedence Clearwater Revival song that was released as the B-side to their big hit “Proud Mary” in 1969.

30. It’s tuned an octave higher than a cello : VIOLA

Both the original 1950 film “D.O.A.” starring Edmond O’Brien, and its 1988 remake starring Dennis Quaid and Meg Ryan, are excellent movies in my opinion. The basic storyline is that the lead character discovers he has been poisoned, and uses the limited time he has to live in order to discover who “murdered” him.

Depending on which bakery makes the particular variety of Girl Scout cookie, the name can vary. For example, Little Brownie Bakers makes the Samoa cookies, while ABC Bakers uses the same recipe and calls the cookies Caramel deLites. The assumption is that these cookies have the exotic name of “Samoa” because they contain the tropical ingredients of coconut and cocoa. The most popular variety of Girl Scout cookie sold are Thin Mints.

That would be in card games, such a blackjack.

“Semester” is a German word from the Latin “semestris”, an adjective meaning “of six months”. We use the term in a system that divides an academic year into two roughly equal parts. A trimester system has three parts, and a quarter system has four.

In the 1930s, the rebel People’s Liberation Army (PLA) of China was locked in battle with the army of the Chinese Nationalist Party led by Chiang Kai-shek. In the jaws of defeat, the PLA (or “Red Army”, as it was known) managed to make a series of withdrawals from the southern part of the country, evading capture by retreating to the north. This campaign of retreat involved the Red Army traversing about 8,000 miles of difficult terrain in a move that took over a year. The Communist troops of the Red Army were led by Mao Zedong and Zhou Enlai. The retreat came to be termed “the Long March”, and its relative success established the reputations of Mao Zedong and Zhou Enlai within the Communist Party, and ultimately led to their takeover of power after the subsequent Chinese Civil War.

Corncob pipes are made from cobs that have been dried for two years and are then hollowed out into the shape of a bowl. Famous smokers of corncob pipes were General Douglas MacArthur, Mark Twain, Norman Rockwell as well as Popeye and Frosty the Snowman.

“Frosty the Snowman” is a song that was recorded first by Gene Autry, in 1950. The song was specifically written in the hope that it would become a follow-up hit to Autry’s “Rudolph the Red-Nosed Reindeer” that topped the charts the previous year.

Hector Hugh Munro was a British writer who actually was born in Burma. He was most famous for his short stories, which he published using the pen name “Saki”. “The Square Egg and Other Sketches” was a collection of short stories published in 1924, nine years after his death.

In the fun 1985 movie “Back to the Future”, Marty McFly finds himself back in 1955, and is trying to get back to HIS future, which is 1985. But on the other hand, 1985 is really Marty’s present, before he went back in time. Why does time travel have to be so complicated …?

The Starz premium cable channel is owned by the same company that owns the Encore cable channel. Starz was launched in 1994 and mainly shows movies.

“Portlandia” is a satirical sketch show that airs on the Independent Film Channel (IFC). The show is set in Portland, Oregon and takes its name from a statue called “Portlandia” which sits above the entrance to a building in downtown Portland. The statue is a copper repoussé work, and is second in size in the US only to the Statue of Liberty.

We often use the term “crockpot” as an alternative for “slow cooker”. The generic term comes from the trademark “Crock-Pot”, now owned by Sunbeam products.

In some Christian denominations, sins can be either venial or mortal in terms of severity, with mortal sins being the more grievous.

Diane Lane is an American film actress, who was born and raised in New York City. Not so long ago, I saw Lane with Richard Gere in “Nights in Rodanthe” (a movie that I recommend). My absolute favorite movie of hers is “Under the Tuscan Sun”, which is based on the memoir of the same name by Frances Mayes (a writer from San Francisco). It’s a lovely romantic story, not without humor, and set in the gorgeous Tuscan landscape.

Superman was sent to Earth in a rocket as a child by his parents, who remained on the doomed planet of Krypton. On Earth, the child was discovered by Jonathan and Martha Kent, farmers who lived near the fictional town of Smallville. The Kents raised the infant as their own, giving him the name Clark, which was Ma Kent’s maiden name.

Shrews are mammals that look like small moles or long-nosed mice. They are the only terrestrial mammals that are known to echolocate, using a series of ultrasonic squeaks to examine their nearby surroundings.

George Lucas created a lead character named Indiana Smith for what was to be his “Indiana Jones” series of films. Lucas asked Steven Spielberg to direct the first film, and Spielberg wasn’t too fond of the name “Smith”. Lucas then suggested “Jones” as an alternative, and Indiana Jones was born.

“Hello, Dolly!” is a Broadway musical that was first produced in 1964, and adapted into a hugely successful movie in 1969. The title role of Dolly Levi was played by Barbra Streisand in the film, with Gene Kelly directing and a leading part for a young Michael Crawford. The stage show was revived on Broadway in 2017, with Bette Midler in the title role.

30. It’s tuned an octave higher than a cello : VIOLA