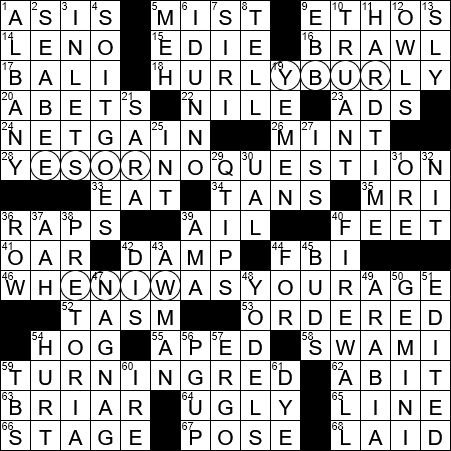 Each of today’s themed answers includes a hidden word. Said word is a shade of RED, and it is TURNED around, written backwards:

1. eBay sale condition : AS IS

“Law & Order True Crime” is part of the “Law & Order” franchise that recounts true crime stories. The first season is centered on the trial of the Menendez brothers Lyle and Erik, who murdered their parents in 1989.

22. River near the Egyptian pyramids : NILE

“Briar” is a generic name for several plants that have thorns, including the rose. Famously, Br’er Rabbit lives in a briar patch.

A selfie is a self-portrait, usually one taken with a digital camera or cell phone. A “group selfie” is sometimes referred to as a “groufie” or “wefie”. A “couple selfie” is known as an “usie” or “ussie”, although those terms are sometimes also used for a group picture.

The Hudson River flows through eastern New York State from Henderson Lake in the Adirondacks to the Port of New York and New Jersey. The river is named for the English explorer Henry Hudson who navigated it in 1609.

The Seabees are members of the Construction Battalions (CB) of the US Navy, from which the name “Seabee” originates. There’s a great 1944 movie called “The Fighting Seabees” starring John Wayne that tells the story of the birth of the Seabees during WWII. The Seabees’ official motto is “Construimus. Batuimus”, Latin for “We build. We fight.” The group’s unofficial motto is “Can Do!”

Siri is a software application that works with Apple’s iOS operating system. “Siri” is an acronym standing for Speech Interpretation and Recognition Interface. You’ve probably seen the ads on television, with folks talking to their iPhones asking for information and responding with a voice. I hear that Google is a little scared by Siri, as Siri is non-visual. There’s no need to touch a screen or a keyboard to work with Siri, no opportunity to click on one of Google’s ads! By the way, voice-over artist Susan Bennett revealed herself as the female American voice of Siri not that long ago. The British version of Siri is called Daniel, and the Australian version is called Karen. Also, “Siri” is a Norwegian name meaning “beautiful woman who leads you to victory”, and was the name the developer had chosen for his first child.

Apparently the term “hooky” comes from “hoekje”, the Dutch name for the game hide-and-seek. To play hooky is to shirk one’s responsibility, as in a schoolkid taking a day off without permission.

Cotton swabs were originally marketed under the name “Baby Gays”, but this was changed in 1926 to “Q-Tips”, with the Q standing for “quality”.

Pretoria is the executive capital of South Africa (RSA), and one of three capital cities in the country. Cape Town is the legislative capital, and Bloemfontein is the judicial capital.

The University of South Africa (Unisa) is the largest university in the whole of Africa. It was founded in 1873 as the University of the Cape of Good Hope, although it operated for many years as an examining agency for universities in Oxford and Cambridge in England. Actual classes were first offered in 1946. Unisa’s main campus is located in Pretoria.

“Gemini” is the Latin word for “twins”.

PGUP (Page Up) and PGDN (Page Down) are two keys found on a PC keyboard.

Just for Men is a hair-coloring product. It is usually applied to remove gray in the hair, and is effective for one to six weeks. So they tell me …