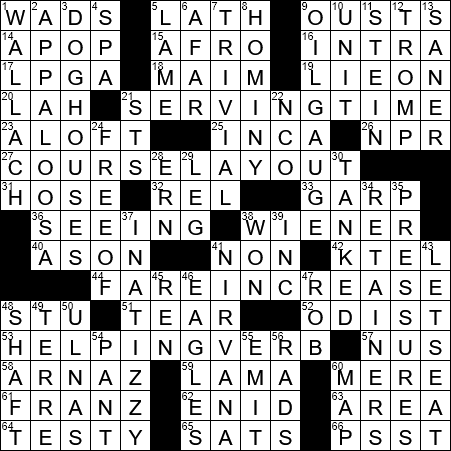 Each of today’s themed answers starts with a term often used at mealtimes:

“Buck” is a slang term for “dollar”. The term has been around at least since 1856, and is thought to derive from the tradition of using buckskin as a unit of trade with Native Americans during the frontier days.

The Jackson 5 singing group was originally made up of brothers Tito, Jackie, Jermaine, Marlon and Michael. The four eldest brothers are still performing, now using the name “The Jacksons”.

Stacy Lewis is a professional golfer from Toledo, Ohio who plays on the LPGA tour. Lewis won the 2011 Kraft Nabisco Championship and the 2013 Women’s British Open, two of women’s major golf championships. Remarkably, Lewis underwent spinal fusion surgery while in high school, as treatment for scoliosis.

“Fresh Air” is a marvelous radio talk show broadcast on NPR, hosted by Terry Gross. The first broadcast of the program was made in 1975, with Judy Blank hosting. Terry Gross took over a few months later, and Gross has been presenting and producing the show ever since. I had the privilege of hearing Terry Gross give a talk here in my hometown some years ago. What a fascinating woman she is, full of great stories about the her experiences interviewing so many interesting personalities.

John Irving’s 1978 novel “The World According to Garp” is somewhat biographical. In fact, Irving’s mother found parts of the novel difficult to read, recognizing elements of herself in Garp’s mother Jenny Fields.

According to the Gospel of Matthew, an angel appeared in a dream to Joseph to tell him the destiny of the child that is being carried by his wife Mary:

And she shall bring forth a son, and thou shalt call his name Jesus: for he shall save his people from their sins.

Those would be letters of the alphabet.

57. Letters between mus and xis : NUS

Lucille Ball was at the height of her success while she was married to Desi Arnaz. The couple met in 1940 and not long afterwards eloped. Lucy had several miscarriages before she gave birth to her first child in 1951, just one month before her fortieth birthday. A year and a half later, while “I Love Lucy” was garnering large audiences, she became pregnant with her second child, a pregnancy that was written into the television show’s script. In fact, the day that Lucy gave birth on the show, was the same day that she gave birth in real life.

The adjective “paltry” comes from an older use of “paltry” as a noun, meaning a “worthless thing”.

Franz Kafka was born in 1883 in Prague, then part of Bohemia and today the capital of the Czech Republic. Kafka is known as one of the greatest novelists who worked in the German language, and even has an adjective named after him. Something that is “kafkaesque” is senseless, disorienting and may have menacing complexity. As it was for many great artists, Kafka’s fame came after his death when much of his work was published.

65. College Board exams, for short : SATS

Actress Anne Jackson was the wife of actor Eli Wallach. The couple married in 1948, and frequently performed together on stage and screen. Wallach and Jackson even worked with their daughters, appearing as a family in a 1978 production of the play “The Diary of Anne Frank”. Jackson was also friends with Marilyn Monroe when Monroe she was starting out as an actress. Monroe sometimes babysat for Wallach and Jackson.

2. Horse with a spotted coat : APPALOOSA

Hominy is a dish consisting of dried kernels of maize that have been treated with an alkali. The term “hominy” is derived from a Native American word for “maize”.

“Tromp” is a variant of “tramp”, so to tromp all over someone is to give them a shellacking.

A global positioning system (GPS) might point out streets (sts.).

A corporal (Cpl.) is a non-commissioned officer (NCO).

Apparently, the first use of the verb “to tank” to mean “to lose or fail” can be pinpointed quite precisely. Tennis great Billie Jean King used the verb in that sense in an interview with “Life” magazine in 1967, with reference to male players.

“The Ren & Stimpy Show” is an animated television show that ran on Nickelodeon from 1991 to 1996. The title characters are Marland “Ren” Höek, a scrawny Chihuahua, and Stimpson J. Cat, a rotund Manx cat. Not my cup of tea …

The Philadelphia Eagles were established in 1933 and joined the National Football League as a replacement for the bankrupt Frankford Yellow Jackets, also from Philadelphia. The “Eagle” name was inspired by the Blue Eagle insignia that was used by companies who were in compliance with the National Industrial Recovery Act that was central to President Roosevelt’s New Deal Program.

“Shafted” isn’t a nice term at all. Someone who has been shafted has been given a raw deal. The term arose in the fifties, playing on the vulgar slang usage of shaft to represent the male organ (a usage that has been around since the early 1700s). The use of the verb “shaft” is a reference to sodomy. As I said, not nice …

Terre Haute, Indiana is a city close to the state’s western border with Illinois. The city is home to a state prison which in turn is home to the state’s death row. The name “Terre Haute” was chosen by French explorers in the 18th century to describe the location, as “terre haute” is French for “high ground”.