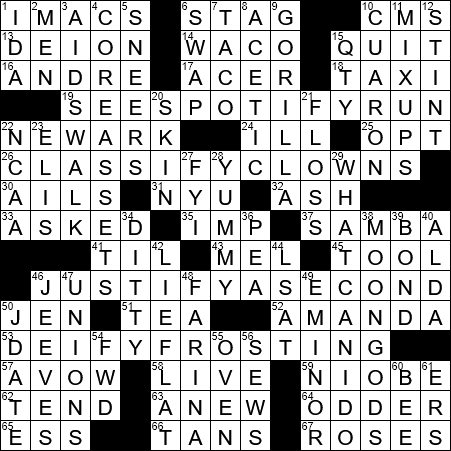 Today’s Theme: If Y Is Inserted

Each of today’s themed clue is a common phrase or word with the letter sequence IFY inserted:

Back where I come from, bachelor parties are called stag parties, and bachelorette parties are known as hen parties.

Deion Sanders is a former NFL footballer, and a former Major League Baseball player. He is the only person to play in a Super Bowl and in a World Series. And, in the 1989 season Sanders became the only person to hit a major league home run and score an NFL touchdown in the same week. While playing, he earned the nicknames “Neon Deion” and “Prime Time Sanders”.

Spotify is a popular music-streaming service that was launched in 2008 in Sweden.

In the “Dick and Jane” series of book for children, Spot was a cat back in the thirties, but then became a dog in later editions.

The “Dick and Jane” beginning reader series of books was originally written by William S. Gray and Zerna Sharp and first published in the 1930s. There are claims of plagiarism from an earlier pair of books published throughout the British Commonwealth that featured the characters Dick and Dora. Indeed, I grew up in the British Isles with “Dick and Dora”, and always assumed that “Dick and Jane” were somehow their American cousins!

What is now the city of Newark, New Jersey was settled in 1666 by puritans from the New Haven Colony. It is thought that the settlement was named for one of the towns named Newark in England, either Newark-on-Trent in Yorkshire or Newark in Nottinghamshire.

New York University (NYU) is comprised of fifteen schools, one of which it the Tisch School of the Arts. The Tisch is famous for its acting program, with notable alumni such as Debra Messing, Christopher Guest and Josh Radnor.

Louisville Slugger is a brand of baseball bat manufactured by the Hillerich & Bradsby Company in Louisville, Kentucky. The famous bat is made of Northern White Ash grown on the New York/Pennsylvania border. These ash forests used by the company are threatened by the emerald ash borer which is moving closer and closer every year. There are already plans in place to replace the traditional wood used in the bat as the assumption is that the source of ash will succumb to infestation.

The samba is a Brazilian dance that is very much symbolic of the festival known as Carnival. Like so much culture around the world, the samba has its roots in Africa, as the dance is derived from dances performed by former slaves who migrated into urban Rio de Janeiro in the late 1800s. The exact roots of the name “samba” seem to have been lost in the mists of time. However, my favorite explanation is that it comes from an African Kikongo word “semba” which means “a blow struck with the belly button”. We don’t seem to have a need for such a word in English …

43. Blanc with “That’s all folks” on his gravestone : MEL

Mel Blanc was known as “The Man of a Thousand Voices”. We’ve all heard Mel Blanc at one time or another, I am sure. His was the voice behind such cartoon characters as Bugs Bunny, Daffy Duck, Porky Pig, Tweety Bird, Woody Woodpecker, Elmer Fudd and Barney Rubble. And the words on Blanc’s tombstone are … “That’s all folks”.

Jennifer Aniston won a 2002 Emmy for playing Rachel on the great sitcom “Friends”. Jennifer’s parents are both actors, and her godfather is the actor Telly Savalas.

Actress Amanda Seyfried’s first film role was in the 2004 teen comedy “Mean Girls”, supporting Lindsay Lohan. Seyfried has quite the voice too, using it to good effect in her leading roles in 2008’s “Mamma Mia!” and 2012’s “Les Misérables”. Seyfried married fellow actor Thomas Sadoski (from “Life in Pieces”) in 2017.

In Greek mythology, Tantalus wanted to make an offering to the Olympic gods, so he cut up his son Pelops into pieces and made up a stew. After his shoulder was consumed, the gods stopped the feasting and reassembled the boy’s body. They replaced his shoulder with one made of ivory.

Film director Alfonso Cuarón has been at the helm of some real blockbusters, including 2004’s “Harry Potter and the Prisoner of Azkaban” and 2013’s “Gravity”. When he won the Academy Award for Best Directing for the latter film, Cuarón became the first Mexican director to be so honored.

You might see “FYI” (For Your Information) or “Attn.” (Attention) at the top of a memo.

“Dr. No” may have been the first film in the wildly successful James Bond franchise, but it was the sixth novel in the series of books penned by Ian Fleming. Fleming was inspired to write the story after reading the Fu Manchu tales by Sax Rohmer. If you’ve read the Rohmer books or seen the films, you’ll recognize the similarities between the characters Dr. No and Fu Manchu.

Farina is semolina or cream of wheat. It is made from wheat grain in which much of the nutritious ingredients are removed leaving a fine “flour”. The name “Farina” is a Latin word meaning “flour”.

Antonín Dvořák was a composer from Czechoslovakia who spent three years working and composing in the United States. He was the director of the National Conservatory of Music of America in New York from 1892 to 1895. Certainly here in the US, Dvořák’s best known work is his Symphony No. 9, “From the New World”, which is often referred to as “The New World Symphony”. His career was very much helped along by fellow composer Johannes Brahms, who very much appreciated Dvořák’s work.

Spark Networks is company that owns several special-interest dating sites online. The most famous is probably ChristianMingle.com, but there is also BlackSingles.com, LDSSingles.com, JDate.com and CatholicMingle.com.