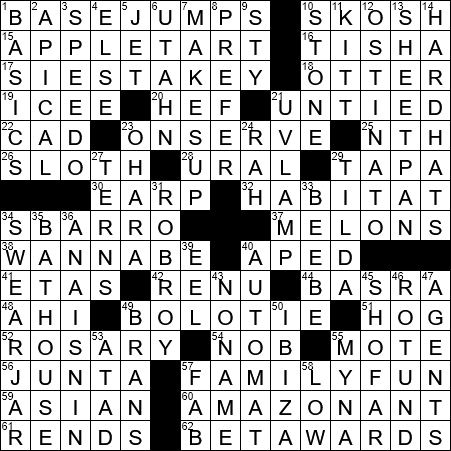 Siesta Key is a barrier island on the Gulf Coast of Florida located near the city of Sarasota.

The fur of the sea otter is exceptionally thick. It is in fact the densest fur in the whole animal kingdom.

Hugh Hefner (often called “Hef”) is from Chicago. His first publishing job was in the military, where he worked as a writer for a US Army newspaper from 1944-46. He went to college after his military service and then worked as a copywriter for “Esquire” magazine. He left “Esquire” to found his own publication that he called “Playboy”, which first hit the newsstands in 1953. “Playboy” has been around ever since.

26. One hanging around in the forest? : SLOTH

The famous Earp brothers of the Wild West were Wyatt, Virgil and Morgan. All three brothers participated in what has to be the most famous gunfight in the history of the Old West, the Gunfight at the O.K. Corral in Tombstone, Arizona. Strangely enough, the fight didn’t happen at the O.K. Corral, but took place six doors down the street in a vacant lot next to a photography studio.

The Arizona town of Tombstone built up around a mine that was owned by one Ed Schieffelin. Schieffelin had been told by US soldiers stationed in the area that the only stone (ore sample) he would find in the area was his tombstone. Regardless, he did file a claim, and it was centered on the grave site of one of his men who had been killed by Apaches. Schieffelin filed papers under the name “the Tombstone claim”.

Domino’s Pizza started out as DomiNick’s, a pizza store in Ypsilanti, Michigan. The store was purchased by Dominic’s founder Tom Monaghan in 1960, along with his brother. Tom bought out his brother a few months later, for the price of a used VW! The store was renamed Domino’s Pizza in 1965, and two years later the first franchise store was opened. There are now over 8,000 stores worldwide, including one in Tallaght in Ireland, the town where I lived for many years in my youth. That Tallaght store became the first Domino’s outlet in the world to hit a turnover of $3 million a year. We Irish obviously have terrible taste when it comes to pizza …

That would be the ETA of a passenger “lighting”, alighting, deplaning..

49. String around the collar? : BOLO TIE

The Rosary is a set of prayer beads used in the Roman Catholic tradition. The name “Rosary” comes from the Latin “rosarium”, the word for a “rose garden” or a “garland of roses”. The term is used figuratively, in the sense of a “garden of prayers”.

Amazon ants are referred to as “slave-raiding” ants. They rob the pupae from related species and use the captured ants as “slaves”. The “slaves” do virtually all the work needed to maintain the Amazon ant nest, including provision of food and nursing the young.

The BET Awards are honors given by the Black Entertainment Television network. They were established in 2001 and celebrate the work of African Americans, as well as other minorities, in all aspects of entertainment, including sports.

Something “apical” is related to an “apex”.

The comedian Roseanne Barr is perhaps best known as the star of her own sitcom called “Roseanne” in which she played the character Roseanne Conner. In 2012 Barr unsuccessfully vied for the Green Party’s nomination for US President. She didn’t give up though, and was successful in winning the nomination of the Peace and Freedom Party. In the 2012 presidential election she earned over 60,000 votes, and placed sixth in the list of candidates.

7. Partner of kisses : MAKES UP

Let’s just kiss and make up …

The Trans Am was a specialty version of the Pontiac Firebird produced from 1969 to 2002. My favorite Trans Am is KITT, the artificially intelligent car in the eighties TV show “Knight Rider” …

In music, an ostinato is a piece of melody or a rhythmic pattern that frequently recurs in a piece. A favorite work in the classical repertoire that makes particular use of the ostinato form is Ravel’s “Bolero”.

John O’Hara was a best-selling novelist whose most successful titles were his first two: “Appointment in Samarra” (1934) and “BUtterfield 8” (1935).

Tilda Swinton is an English actress, quite famous in her native land. Swinton made a big name for herself outside the UK when she played the “baddie” in the 2007 movie “Michael Clayton”, opposite the “goodie” played by George Clooney.

William Beebe was an American explorer, active in the first half of the 20th century. Beebe was very interested deep-sea exploration and this interest led to the development of the bathysphere by Otis Barton in 1928. Beebe accompanied Barton on the first manned descent in a bathysphere, down to 803 ft. A few years later, in 1934, the pair descended to 3,028 ft. setting a record that stood for 15 years.

A bat house is like a bird house. Usually referred to as a “bat box”, a bat house differs from a birdhouse in that is has a larger opening, and that opening is on the underside of the structure. Bat boxes provide a relatively safe location for bats to rear their young.

“Death of Venus” is a collection of short stories by Anais Nin that was published in 1977, not long after the author’s passing. The stories were originally written on commission for a private collector in the 1940s.

An automat is a fast food restaurant that was popular in the first half of the 20th century. The original automat was established in Berlin, but the concept took off in the US. However, our modern fast food restaurants virtually wiped out automats starting in the fifties.

45. Instrument made from a ram’s horn : SHOFAR

A shofar is a musical instrument used in Jewish rituals. It is a relatively simple instrument, made from an animal’s (usually a ram) horn.