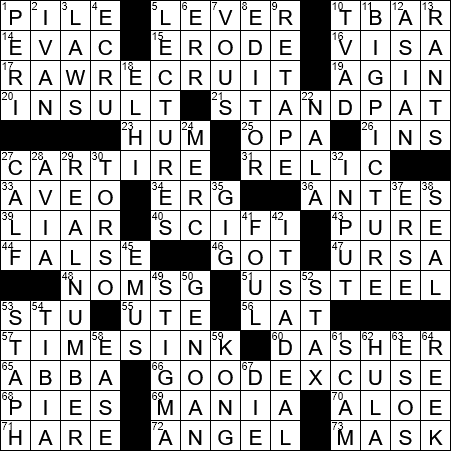 Today’s themed answers each start with a type of DEAL:

A crowbar is a wonderful tool, one that can be used to pry open things, and to remove nails. The claw at one or both ends of the tool aids in that nail removal, and it is likely this iron claw was said to resemble the claw of a crow, giving us the name “crowbar”. Back in Elizabethan times. the same tool was called an “iron crow”. There’s a line in Shakespeare’s “Romeo and Juliet” that reads “Get me an iron crow and bring it straight/Unto my cell.”

Mastercard is a financial services company that is headquartered in Harrison, New York. The company was originally called Master Charge and was set up by a group of California banks to compete with BankAmericard (which later became Visa).

Opa-Locka is a rather interesting city in Florida. Located near Miami, Opa-Locka has a themed city plan that is based on “One Thousand and One Nights”. The city hall has a very Arabian look, and some examples of street names are Ali Baba Avenue and Sesame Street.

Michelin is a manufacturer of tires that is based in France. The company was founded by brothers Édouard and André Michelin in 1888. The brothers were running a rubber factory at the time, and invented the world’s first removable pneumatic tire, an invention that they used to launch their new company. Michelin is also noted for rating restaurants and accommodation in its famous Michelin Travel Guides, awarding coveted Michelin “stars”.

The pot in a card game has been referred to as the kitty since the 1880s. It’s not certain how the name “kitty” evolved but possibly it came from “kit”, the necessary equipment for the game.

US Steel was founded in 1901 with a merger of Carnegie Steel, Federal Steel and National Steel. The resulting company immediately became the world’s first billion-dollar corporation. US Steel reorganized in 1986 and changed its name to USX Corporation, but reverted to the US Steel name in 2001. I think I’m right in saying that the USX name was chosen because US Steel is traded under the symbol “X” on the New York Stock Exchange …

John Pierpont Morgan was a financier and banker active in the last half of the 19th century and the early 20th century. Given the tremendous power that came with his wealth, J. P. Morgan and other tycoons were at times unpopular with the masses. Morgan did not often respond to criticism although did once say “I owe the public nothing”. Around the same time, John D. Rockefeller habitually rebuffed public inquiries with the words “silence is golden”.

The prefix “peri-” is Greek in origin and means “around”. An example of its use is “periscope”, a device on a submarine for looking “around”.

Sir Isaac Newton’s three laws of motion are the basis of classical mechanics. The three laws define the relationship between a body and the forces acting on that body, and its resulting motion.

In French, “Parlez-vous français?” means “Do you speak French?”

A stigma (plural “stigmata), in a social sense, is a distinguishing mark of disgrace. For example, one might have to suffer the stigma of being in prison. The term derives from the Greek “stigma” meaning “mark, brand”.

Stax is a brand of potato snack made by Lay’s. Stax are similar to its famous competitor Pringles.

Staphylococcus is a genus of bacteria. Under a microscope it can be seen that the individual bacteria form into clusters like bunches of grapes. “Staphylococcus” comes from the Greek word meaning “bunch of grapes”.

9. Make another recording of : RETAPE