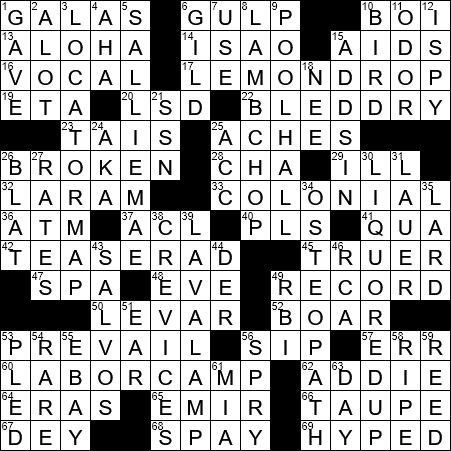 “Big Boi” is the stage name of rapper Antwan André Patton who is best known as one half of the duo Outkast, performing alongside André 3000.

A lemon drop is a sweet-and-sour, vodka-based cocktail, with the “sweet” coming from triple sec and simple syrup, and the “sour” coming from lemon juice. The lemon drop was invented in the seventies here in San Francisco, in a bar called Henry Africa’s.

The actress Susan Dey first appeared on “The Partridge Family” when she was 17-years-old when she had no acting experience. Years later, Dey won a Golden Globe for playing the leading role of Grace Van Owen in “L. A. Law”.

“Sallie Mae” is a nickname for SLM Corporation, created in 1972 by the US government as the Student Loan Marketing Association. By 2004 the government had severed all its ties with Sallie Mae, and today SLM is basically a profit-focused lender.

To gild is a to coat with gold. The phrase “to gild the lily” means to add unnecessary ornamentation, to try to improve something that is already ideal.

The more correct name for the game of pool is pocket billiards. The name “pool” arose after pocket billiards became a common feature in pool halls, places where gamblers “pooled” their money to bet on horse races.

To blat is to cry, especially like a sheep. In other words, to “blat” is to “bleat”.

Matt Lauer became the news anchor for NBC’s “The Today Show” when he landed the gig as co-host after Bryant Gumbel retired from the job in 1997.

A piton is a piece of mountaineering equipment, an anchor designed to protect a climber if he or she falls. It is a metal spike driven into a crack in the rock face with a hammer. The piton has an eyehole through which a rope is attached using a carabiner. “Piton” is a French word for a “hook”.

The lava lamp was invented in 1960 by a British man, Edward Craven-Walker. The “lava” is a mixture of wax and carbon tetrachloride, floating in a water/glycerol mix. The wax reduces in density as it picks up heat from the incandescent bulb in the lamp’s base. The wax rises, cools, and then sinks to the bottom of the liquid only to be heated again.

26. With 49-Across, it keeps repeating itself … and, based on the first and last letters, an apt description of each answer to a starred clue : BROKEN …