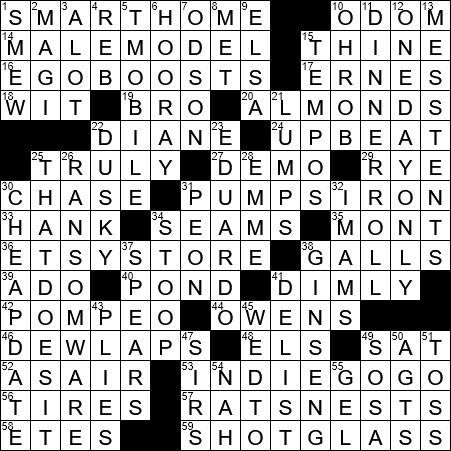 Blue Moon Odom’s real name was Johnny Lee Odom, and he was a pitcher for the Oakland Athletics. With the A’s, Odom won three consecutive World Series, from 1972 to 1974.

Diane Lane is an American film actress, who was born and raised in New York City. Not so long ago, I saw Lane with Richard Gere in “Nights in Rodanthe” (a movie that I recommend). My absolute favorite movie of hers is “Under the Tuscan Sun”, which is based on the memoir of the same name by Frances Mayes (a writer from San Francisco). It’s a lovely romantic story, not without humor, and set in the gorgeous Tuscan landscape.

“Unfaithful” is a 2002 drama film with leads played by Richard Gere and Diane Lane. The Hollywood movie is a remake of a French film called “La Femme infidèle” (“The Unfaithful Wife”).

Today, we use the verb “to gall” to mean “to vex, irritate”. This is a figurative usage of the same verb that arose mid-1400s, when it meant “to make sore by chafing”. Back then, a gall was a sore on the skin caused by rubbing or chafing.

A dewlap is a flap of skin that hangs below the neck of some creatures. Dewlaps are found on anything from dogs to iguanas.

Indiegogo is a crowdfunding website with a company headquarters in San Francisco. ONline crowdfunding really started in the late nineties, and Indiegogo was founded 2008.

Crowdsourcing is mainly an online phenomenon, and is the solicitation of perhaps services, ideas or content from a large group of people. “Crowdsourcing” is a portmanteau of “crowd” and “outsourcing”. An example of crowdsourcing is crowdfunding, where an individual solicits many small contributions from a large number of people to fund a project.

Queen of France Marie Antoinette is credited with popularizing the elaborate hairstyle known as the pouf. The hair was styled using a pomade made from wholesome ingredients such as beef marrow and bear grease. Because of the complexity of the hairstyle, ladies wore it for a week or two, during which time the animal fat would become rancid. It was reported that vermin would be attracted to the hair while sleeping, which apparently led to the phrase “her hair is a rat’s nest”.

“Vous êtes ici” are important words to know when navigating your way around Paris. They mean “You are here”, and you’ll often see them on maps in the street.

A shot glass is a small glass used to measure or hold liquor. There is no standard size for a shot in most parts of North America, but it is generally 1.25 to 1.5 fluid ounces. A smaller, 1 fl. oz. shot is called a “pony shot” or “short shot”.

The smew is a beautiful-looking species of duck found right across northern Europe and Asia. The smew requires trees to complete its breeding cycle as it nests in tree holes, such as old woodpecker nests.

During the Civil War, a soldier in the Confederate army was often referred to as a “reb” or a “gray”.

“Frozen” is a 2013 animated feature from Walt Disney Studios that is based on the Hans Christian Andersen fairy tale “The Snow Queen”. The film is all about the exploits of Princess Anna, the younger sister of Elsa, Snow Queen of Arendelle.

“The Dick Van Dyke Show” is a sitcom that ran from 1961 to 1966 starring Dick Van Dyke and Mary Tyler Moore as Rob and Laura Petrie. This classic show was created by the great Carl Reiner, who also had a supporting role on screen.

The tempo of a piece of music is usually designated with an Italian word on the score. For example, “grave” is slow and solemn, “andante” is at a walking pace, and “allegro” is fast, quickly and brightly.

Twilight is the light experienced when the sun is below the horizon, both in the morning and the evening. The prefix “twi-” seems to come from the sense of “half”, and in “half light”. There appears to be no connection to the word “twice”, despite twilight occurring twice each day.

Eduardo Saverin is one of the founders of Facebook, and someone who worked alongside Mark Zuckerberg while the pair were studying at Harvard. As was emphasized in the 2010 film “The Social Network”, Zuckerberg treated Saverin pretty badly, diluting his partner’s holding in the company. Facebook settled a resulting lawsuit with Saverin, so he still did okay financially, but lost out on the really big bucks. Savarin is from São Paulo, Brazil and became a US citizen in 1998. After his controversial exit from Facebook, Savarin moved to Singapore. He renounced his US citizenship in 2011, in a move viewed by many as a tactic designed to avoid payment of an estimated $700 million in capital gains taxes.

26. Program that holds you up? : RANSOMWARE

Ransomware is a piece of software used to extort money from computer users ranging from individuals to complete enterprises. The ransomware usually encrypts the victim’s data, and presents a message demanding a payment in exchange for the key needed to decrypt the data. On famous example is the WannaCry ransomware attack that was launched in May of 2017. Almost a quarter of a million computers were affected in over 150 countries. Actual ransom payments made by victims (to bitcoin accounts) amounted to over $130,000. The attackers have never been brought to justice.

Emme is the highest paid plus-size model in the world. Emme’s real name is Melissa Aronson, and she was born in New York City and raised in Saudi Arabia.

A “barre” is a handrail used by ballet dancers for warm-up exercises and to provide support when practicing certain moves.

49. Player who failed to lead the league in all three seasons in which he hit 60+ home runs : SOSA