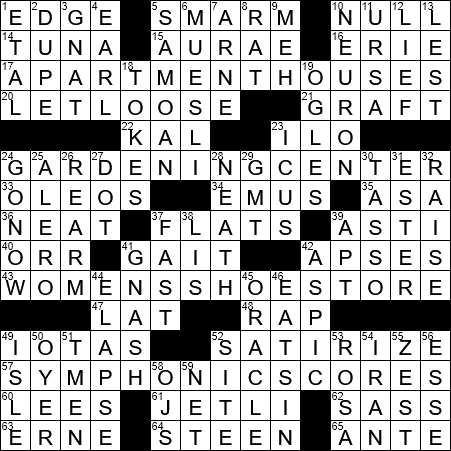 Each of today’s themed answers is clued with “Where to find (FLATS)”:

The Edge is a midsize crossover SUV that Ford has been manufacturing in the company’s plant in Oakville, Ontario since 2006.

Erie is a city in the very north of Pennsylvania, right on the southern shore of Lake Erie. The city takes its name from the Erie Native American tribe that resided in the area. Erie is nicknamed the Gem City, a reference to the “sparkling” Lake Erie.

Lake-effect snow is produced when cold air moves across a relatively warm lake picking up moisture from the water below. The warm moisture rises through the cold mass of air, freezes and then falls as snow on the downwind side of the lake.

“Flat”, in the sense of an apartment or condominium, is a word more commonly used in the British Isles than on this side of the pond. The term “flat” is Scottish in origin, in which language it used to mean “floor in a house”.

Indian-American actor Kal Penn made a name for himself in the “Harold & Kumar” series of comedy films. These so called “stoner comedies” are not my cup of tea, but I enjoyed him playing his more mainstream roles on TV’s “House” and “24”. He left the world of acting when President Obama won the 2008 election to work as an Associate Director in the White House Office of Public Engagement (although he did leave the White House briefly to film the “Harold & Kumar” sequel).

The International Labour Organization (ILO) is an agency, now administered by the UN, that was established by the League of Nations after WWI. The ILO deals with important issues such as health and safety, discrimination, child labor and forced labor. The organization was recognized for its work in 1969 when it was awarded the Nobel Peace Prize.

Flats are shallow trays in which young plants in individual pots are displayed for sale.

Flats are shoes that are not high-heeled.

“Once Upon a Time in China” is a franchise of Hong Kong martial arts films that started off in 1993. The lead character in each movie is Chinese folk hero Wong Fei-hung. Said hero is portrayed by Jet Li in the first three films, before the role was taken over by Vincent Zhao.

“The Drawing Lesson” is a 1665 painting by Dutch artist Jan Steen that can be viewed in the J. Paul Getty Museum in Los Angeles.

Long before Arne Duncan became Secretary of Education, he was a professional basketball player, but not in the NBA. Duncan played for the National Basketball League of Australia, with the Eastside Spectres in Melbourne.

A synapse is a junction between a nerve cell and another cell over which an electrical or chemical signal can pass.

“Lief” means “willingly, gladly”, and is a term that come from Middle English in the mid-13th century I think that it is a lovely word …

“Toke” is an informal term for a tip given to a dealer or other employee at a casino.

There are four dots in the word “Mississippi”, with each being part of a letter I (i).

Torquato Tasso was an Italian poet who lived in the 1500s. He is best known for his poem “Jerusalem Delivered”. Such is his fame and standing in the arts, that he himself is the subject of works by other artists. Goethe wrote a play called “Torquato Tasso” in 1790 that explored Tasso’s life. Donizetti composed an opera, also called “Torquato Tasso”, in 1833 that incorporated some of the poet’s writing in the libretto.

Ramadan is the ninth month of the Islamic calendar, and is traditionally a period of fasting. The faithful that observe Ramadan refrain from eating, drinking and sexual relations from dawn to dusk everyday, a lesson in patience, humility and spirituality.

Something that is germane is relevant. “Germane” originally meant “having the same parents”, but it was used more figuratively to mean “on topic” by William Shakespeare in “Hamlet”. Tthat’s the way we’ve been using it ever since “Hamlet” was first performed in the 1600s.

Aspic is a dish in which the main ingredients are served in a gelatin made from meat stock. “Aspic” is a French word meaning “jelly”.

53. Parks whose famous bus is in the Henry Ford Museum : ROSA

The Henry Ford is a huge indoor-outdoor museum complex in Dearborn, Michigan. The museum was founded by automobile industrialist Henry Ford in 1929 as the Edison Institute, and was opened to the public in 1933. Exhibits focus on the Industrial Revolution in America, although there are also many fascinating items in the collection that reflect US history in general. Included in the Henry Ford’s collection are:

The last Shah of Iran was Mohammad Reza Shah Pahlavi, as he was overthrown in the revolution led by the Ayatollah Khomeini in 1979. The post-revolution government sought the extradition of the Shah back to Iran while he was in the United States seeking medical care (he had cancer). His prolonged stay in the United States, recovering from surgery, caused some unrest back in Iran and resentment towards the United States. Some say that this resentment precipitated the storming of the US Embassy in Tehran and the resulting hostage crisis.

Cato the Younger was a politician in the late Roman Republic, noted for his moral integrity. He is also remembered for an extended conflict with Julius Caesar.