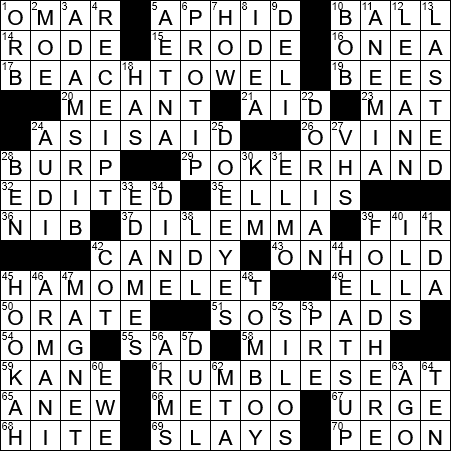 The themed answers that we have HERE, in today’s puzzle, are all things that can be FOLDED:

Jelly beans are thought to have originated in Boston, and it is documented that they were sent by families and friends of soldiers fighting in the Civil War.

50. Speak from the soapbox : ORATE

S.O.S is a brand name of scouring pads made from steel wool impregnated with soap. The product was invented as a giveaway by an aluminum pot salesman in San Francisco called Ed Cox. His wife gave it the name “S.O.S” as an initialism standing for “Save Our Saucepans”. Note the punctuation! There is no period after the last S, and that is deliberate. When Cox went to register the trademark, he found that “S.O.S.” could not be a trademark because it was used as an international distress signal. So he dropped the period after the last S, and I hope made a lot of money for himself and his wife.

A rumble seat is an exterior seat found in pre-WWII cars that opens out from the rear of the vehicle. Back in the 1800s, a “rumble” was a seat in the rear of a carriage that was used by servants. A car’s rumble seat was also called a “mother-in-law seat”.

Shere Hite is a German sex educator, although she was born in the US. Hite’s work focuses on sexual experience and what meaning it holds for an individual.

“Buffy the Vampire Slayer” is a TV series that originally aired from 1997 to 2003. “Buffy …” was incredibly successful, especially given that it wasn’t aired on the one of the big four networks. The show was created by Joss Whedon and stars Sarah Michelle Gellar in the title role.

2. Stooge with Larry and Curly : MOE

And here it is, my favorite movie of all time! “Adam’s Rib” is a classic romantic comedy starring the powerful duo Spencer Tracy and Katharine Hepburn, playing two lawyers married to each other. Inevitably, the married couple have to take opposite sides in a high-profile court case, and hilarity ensues. The film is an interesting exploration of the roles of men and women in 1949 American society.

The real name of singer Bob Dylan is Robert Zimmerman. Zimmerman chose that particular stage name because he was greatly influenced by the poetry of Welsh poet Dylan Thomas.

The term “anemia” (or “anaemia” as we write it back in Ireland) comes from a Greek word meaning “lack of blood”. Anemia is a lack of iron in the blood, or a low red blood cell count. Tiredness is a symptom of the condition, and so we use the term “anemic” figuratively to mean “lacking in vitality or substance”.

“The Picture of Dorian Gray” is a novel by Oscar Wilde, in fact Wilde’s only novel. In the story, the title character is a young man appearing in a painting. Jokingly, Dorian sells his soul to the devil so that the painting would age rather than he.

“Batman v Superman: Dawn of Justice” is a 2016 movie starring Ben Affleck and Henry Cavill in the title roles. It’s a superhero film, so I probably won’t be seeing it, despite an impressive supporting cast. That includes Amy Adams as Lois Lane, Jesse Eisenberg as Lex Luthor and Jeremy Irons as Alfred Pennyworth.

“My Cup Runneth Over” is a song from the 1966 Broadway musical “I Do! I Do!”. A very popular recording of the song was made by Ed Ames in 1967. The title of the song is a quotation from the Bible, from the Book of Psalms.

A hookah is a waterpipe, a device for smoking tobacco in which the smoke is passed through a water basin before it is inhaled.

48. Peppermint Patty, for one : TOMBOY