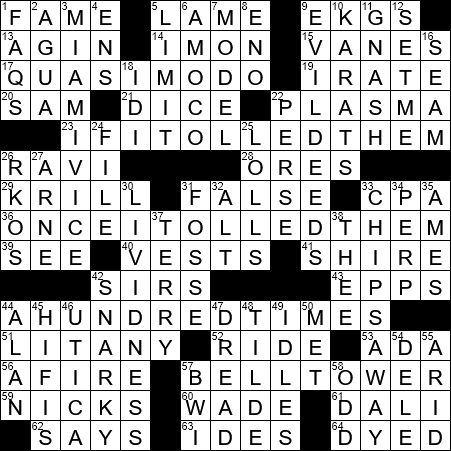 Today’s themed answers give us a quip that might have come from Victor Hugo’s Hunchback of Notre Dame:

1. Qualifier for a hall entry? : FAME

The first Hall of Fame (HOF) established in the US was the Hall of Fame for Great Americans, an outdoor sculpture gallery located in the grounds of Bronx Community College in New York City. Completed in 1900, it is an open-air colonnade featuring the bronze busts of renowned Americans such as President George Washington, author Henry David Thoreau, musician John Philip Sousa and baseball legend Jackie Robinson. The Hall of Fame of Great Americans was inspired by the Ruhmeshalle (“Hall of Fame” in German) located in Munich, Germany that exhibits busts of important people from Bavaria.

Samuel Langhorne Clemens was the real name of the author Mark Twain. Twain wasn’t the only pen name used by Clemens. Early in his career he signed some sketches as “Josh”, and signed some humorous letters that he wrote under the name “Thomas Jefferson Snodgrass”. The name of Mark Twain came from the days when Clemens was working on riverboats on the Mississippi. A riverboatman would call out “by the mark twain” when measuring the depth of water. This meant that on the sounding line, according to the “mark” on the line, the depth was two (“twain”) fathoms, and so it was safe for the riverboat to proceed.

Charles Laughton was an actor from Yorkshire, England who had remarkably successful career in Hollywood. Among his most famous roles were Captain Bligh in 1935’s “Mutiny on the Bounty”, and Quasimodo in 1939’s “The Hunchback of Notre Dame”. Laughton was married to English actress Elsa Lanchester, who was also a big star in Hollywood.

The Uncle Sam personification of the United States was first used during the War of 1812. The “Uncle Sam” term was so widely accepted that even the Germans used it during WWII, choosing the codeword “Samland” for “America” in intelligence communiques.

Plasma televisions are so called because the screen is made up tiny cells containing electrically charged ionized gases (plasmas). Each of the cells is effectively a tiny fluorescent lamp.

Ravi Shankar was perhaps the most famous virtuoso (to us Westerners) from the world of Indian classical music, and was noted for his sitar playing. Also, Shankar was the father of the beautiful pop singer Norah Jones.

Frodo Baggins is a principal character in J. R. R. Tolkien’s “The Lord of the Rings”. Frodo is a Hobbit, and is charged with the quest of destroying Sauron’s Ring in the fires of Mount Doom.

“Lobster Telephone” is a work by surrealist artist Salvador Dalí that dates back to 1936. It consists of a telephone with plaster lobster lying across the handpiece.

“Amoco” is an abbreviation for “American Oil Company”, an oil company that merged with BP in 1998. Amoco was the first oil company to introduce gasoline tanker trucks and drive-through filling stations. I wonder did they know what they were starting …?

A scapegoat is a person chosen to take the blame in place of others. The term comes from the Bible’s Book of Leviticus, which describes a goat that was cast into the desert along with the sins of the community.

“Per se” is a Latin phrase that translates as “by itself”. We use “per se” pretty literally, meaning “in itself, intrinsically”.

“Alfred” is a sung work for the stage with music by Thomas Arne. “Alfred” was first performed as a masque in 1740. Arne further developed the piece into an oratorio that debuted in 1745, and then an opera that opened in 1753. The finale of all three versions is the stirring song “Rule, Britannia!”.

Bob Fosse won more Tony Awards for choreography than anyone else, a grand total of eight (and another Tony for direction). Fosse also won an Oscar for Best Director for his 1972 movie “Cabaret”, even beating out the formidable Francis Ford Coppola who was nominated that same year for “The Godfather”.

Terry Jones is a comic actor from Wales who was a member of the “Monty Python” team. It was Jones who devised the stream-of-consciousness format for the “Monty Python’s Flying Circus” TV show, with sketches flowing from one into the other.

Terry Gilliam is a former member of the famous British Monty Python comedy troupe. Gilliam was the only American in the group, and he was the person responsible for the animations featured in “Monty Python’s Flying Circus”.

Utica, New York is known as “Second Chance City” these days, due to the recent influx of refugees from war-torn parts of the world and from Bosnia in particular. These immigrants have helped revitalize the area and reverse a trend of population loss.

The tilde (~) diacritical mark is very much associated with the Spanish language. We use the name “tilde” in English, taking that name from Spanish. Confusingly, the word “tilde” in Spanish is used more generally to mean “accent mark, diacritic”, of which a “~” is just one. What we call a “tilde” in English is usually referred to as a “virgulilla” or “tilde de la eñe” in Spanish.

A circumflex is a diacritic mark used routinely in some languages, such as French. For example, there’s a circumflex over the first “e” in “être”, the French for “to be”.

The region now covered by the US state of New Mexico was known as “Nuevo México” at least since 1563. Spanish explorers gave the area this name due to an erroneous belief that it was home to a branch of the Mexica, a people who were indigenous to the Valley of Mexico. So, the region has had the “New Mexico” name for centuries before the nation of Mexico adopted its name in 1821.