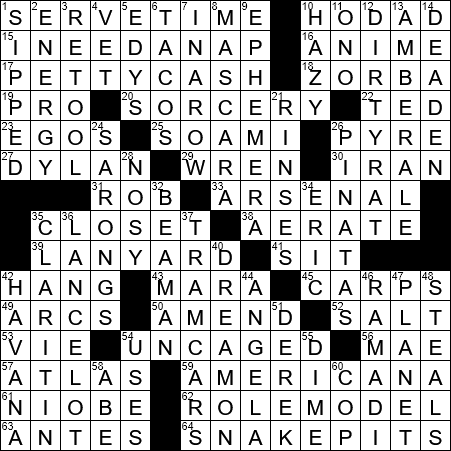 “Hodad” is a slang term that dates from the fifties, It is used to describe someone who hangs out at the beach, but someone who isn’t a surfer. Hodads were mainly into cars and music.

I really, really do …

16. Many a Studio Ghibli film : ANIME

Studio Ghibli is an animation film studio based in Tokyo. The name “Ghibli” was chosen as it is the name of a hot desert wind that occurs in Libya. The idea is that Studio Ghibli, when founded in 1985, would “blow a new wind through the anime industry”.

18. Character who dances on the beach at Stavros : ZORBA

Stavros is a coastal village on the Greek island of Crete. The village was used as a location for the 1964 movie “Zorba the Greek”. Indeed, the beach named Stavros was the setting for the famous “Zorba’s dance” scene.

“Rectify” is TV drama series about a man who is released based from prison based on DNA evidence after spending almost twenty years on death row.

Dylan Thomas is perhaps the most famous Welsh poet and writer. His most famous poems are “Do not go gentle in that good night” and “And death shall have no dominion”. He also wrote a famous radio drama called “Under Milk Wood” that was first broadcast in in 1954, and that was eventually adapted for the stage and the big screen. My favorite Dylan Thomas work is “A Child’s Christmas in Wales” that was also written originally for the radio, before being published as a work of prose.

“Baby Blues” is a comic strip that was launched in 1990 by Rick Kirkman and Jerry Scott. Initially, the strip told the story of married couple Darryl and Wanda MacPherson, along with their baby Zoe. The family now includes middle child Hammie and youngest child Wren.

The Maranjab Desert is located about 40 miles from the Iranian city of Kashan. By all accounts, the Maranjab is a beautiful spot and is a popular destination for tourists.

The hit TV show “House of Cards” is a political drama starring Kevin Spacey that highlights ruthless manipulation within the corridors of power in Washington, D.C. The show is an adaptation of a BBC miniseries of the same name, which in turn is based on a novel by Michael Dobbs. My wife and I have seen both versions of the show but disagree on which is the best. I favor the US version …

It isn’t really clear where we get our verb “to grouse” from (meaning “to complain”). The term was first used as slang in the British Army in the 1880s.

Mae West was always pushing the envelope when it came to the “sexy” side of show business, even in her early days in Vaudeville. One of the first plays in which West starred on Broadway was called “Sex”, a work she penned herself. The show was a sell-out, but city officials had it raided and West found herself spending ten days in jail after being convicted of “corrupting the morals of youth”. She started in movies in 1932, already 38 years old. West used her experience writing plays to rewrite much of the material she was given, and so really she was totally responsible for her own success and on-screen appeal.

“Tinseltown” is a nickname for Hollywood.

The famous Flemish geographer Gerardus Mercator published his first collection of maps in 1578. Mercator’s collection contained a frontispiece with an image of Atlas the Titan from Greek mythology holding up the world on his shoulders. That image gave us our term “atlas”.

8. It runs in the shower : MASCARA

“Ephemera” was originally a medical term, used to describe a fever that only lasted a day. The use of the term was expanded in the 17th century to include insects that were short-lived, and by end of the 18th century ephemera were any things of transitory existence.

11. Noted resident of The Dakota in Manhattan : ONO

“Sarong” is the Malay word for “sheath”, and a sarong was originally the garment worn by Malay men and women around their waists. The Malay sarong is actually a tube of fabric, about a yard wide and two-and-a-half yards long. Many variations of the sarong are worn all over South Asia and the Pacific Islands. I had occasion to wear one in Hawaii many years ago, and found it very … freeing!

Claritin is a Bayer brand name for the drug loratadine, which is used to treat allergies.

In Cuba, small, rickshaw-type cabs are known as “cocotaxis”. They are three-wheeled vehicles powered by a two-stroke engine. The driver sits in the front, and there is room for 2-3 passengers in the seat behind. A cocotaxi’s body is usually quite round, and is made from yellow-colored fiberglass. The vehicle’s name comes from its shape, resembling a “coca” meaning “coconut”.

Ramadi is a city in central Iraq that is located less than a hundred miles west of Baghdad.

Mercury is the smallest of the planets in our solar system, and is the nearest to the Sun. Mercury orbits the sun relatively rapidly compared to the other planets, and this fact may have led to it being given the name “Mercury”, the Roman deity who was the speedy messenger to the gods.