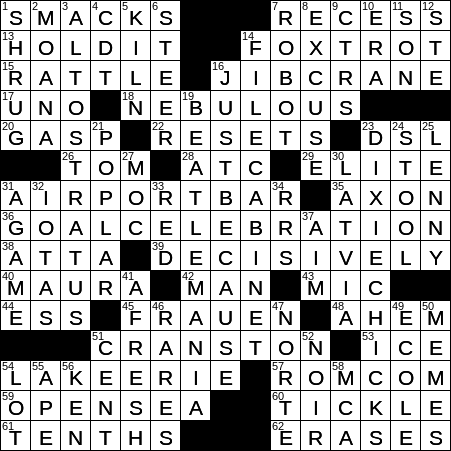 Something nebulous is indistinct and vague. The term “nebulous” comes from the Latin “nebula” meaning “mist, vapor”.

The concept of air traffic control (ATC) was introduced to the world in 1920 at Croydon Airport in South London, England.

51. Tony winner for his LBJ role in “All the Way” : CRANSTON

The actor Bryan Cranston is best known today for playing Walter White in the crime drama “Breaking Bad”. Prior to joining that incredibly successful show, Cranston play Hal in the sitcom “Malcolm in the Middle”. He also had a recurring role on “Seinfeld” from 1994 to 1997, as Jerry’s dentist Dr. Tim Whatley.

“All the Way” is a 2012 play about President Lyndon B. Johnson’s efforts to get the landmark Civil Rights Act of 1964 signed into law. In the original Broadway production, Bryan Cranston portrayed LBJ, and won himself a Tony Award.

“You’ve Got Mail” is a 1998 romantic comedy film starring Tom Hanks and Meg Ryan, directed by Nora Ephron. The film is an adaptation of the Miklos Laszlo play “Parfumerie”. The storyline of “Parfumerie” was also used for the movies “The Shop Around the Corner” (from 1940 starring James Stewart and Margaret Sullivan) and “In the Good Old Summertime” (from 1949 starring Van Johnson and Judy Garland).

When one thinks of the word “main” in the context of the sea, the Spanish Main usually comes to mind. Indeed, the use of the more general term “main” to mean “sea”, originates from the more specific “Spanish Main”. “Spanish Main” originally referred to land and not water, as it was the name given to the mainland coast around the Caribbean Sea in the days of Spanish domination of the region.

“Ten-percenter” is an informal term describing an agent, particularly a showbiz agent. The reference is to the 10% fee that agents often charge for their services.

“Meh!” is one of those terms unfamiliar to me outside of crosswords. It is a modern colloquialism meaning “I’m not great, but not bad”. A friendly reader of this blog tells me that the usage of the term increased dramatically after it started to appear regularly in “The Simpsons” starting in the early nineties.

The term “Polynesia” was coined in 1756 by the author Charles de Brosses, when he used it to describe all the islands in the Pacific. This was later restricted to what we now refer to as a subregion of Oceania.

A steer is a male bovine that was castrated when young and is then raised for beef. The term comes from the Old English “steor” meaning “bullock”.

7. Subject of an Asimov collection : ROBOT

The phenomenon known as “Beatlemania” originated in the early sixties, with the term describing the frenzy exhibited particularly by female fans of the Beatles. The term is perhaps imitative of the much older “Lisztomania”, a term coined in 1844 for the similar fan frenzy directed towards pianist and composer Franz Liszt during an eight-year tour of Europe starting in 1839. Hysterical fans of Liszt would try to get locks of his hair, fight over his handkerchiefs and even carry glass vials containing the dregs from his coffee cup.

John Lennon and Paul McCartney made an agreement before they became famous that they would always give joint credit for their songs. In the early days, the duo wrote their songs together, working alongside each other. Soon they would write songs individually, with one giving the other limited input. Regardless, the Lennon-McCartney attribution was used for all the songs they wrote either individually or together right up to 1974. The partnership was officially dissolved in December 1974, in the Polynesian Resort in Walt Disney World, Florida. There, John Lennon put his signature to official documents couriered to him by Apple’s lawyers (Apple being the Beatles record label).

The Dixie Chicks are a country music trio comprising sisters Martie Maguire and Emily Robison, along with lead singer Natalie Maines. The band hit the headlines in 2003 during a London concert that took place around the time of the invasion of Iraq. Maines expressed her opposition to the war to the general acclaim of the British audience, and the general disapproval of conservatives back in the US.

“Lenny Bruce” was the stage name of comedian Leonard Schneider. Bruce was noted for his edgy style and material on stage, as well as his edgy lifestyle offstage. He was arrested several times and charged with obscenity because of language used in his routines. He was eventually found guilty of one of the charges and sentenced to four months in a workhouse. He was set free on bail while making a much-publicized appeal. Sadly, he died before the appeal process was completed. After his death, the Governor of the New York granted Lenny Bruce a pardon.

The Republic of Belarus is a landlocked country in Eastern Europe, located east of Poland and north of Ukraine. Belarus didn’t exist as an entity until the Russian Revolution when it was created as one of the Soviet Socialist Republics (SSR) that made up the USSR. The Republic of Belarus was formed soon after the USSR dissolved in 1990, but unlike many of the former Soviet Republics, Belarus has retained many of the old Soviet policies. Alexander Lukashenko is the country’s president and he believes in state ownership of the economy. Belarus and Russia have formal agreements in place that pledge cooperation.

In France, an “École des Beaux-Arts” is a school of fine arts. The most famous such school is the École nationale supérieure des Beaux-Arts located on the left bank of the Seine in Paris, across the river from the Musée du Louvre.

What we usually call a cash register here in North America, we mostly call a “till” in Ireland and the UK. I haven’t heard the word “till” used much here.

Raymond Chandler was novelist and screenwriter who turned to the pen relatively late in life, after losing his job in the oil business at the age of 44. Chandler’s first novel was published when he was published in his early fifties. That novel was “The Big Sleep”, which featured his famous detective Philip Marlowe”.

Our usage of “slew” to mean “large number” has nothing to do with the verb “to slew” meaning “to turn, skid”. The noun “slew” come into English in the early 1800s from the Irish word “sluagh” meaning “host, crowd, multitude”.