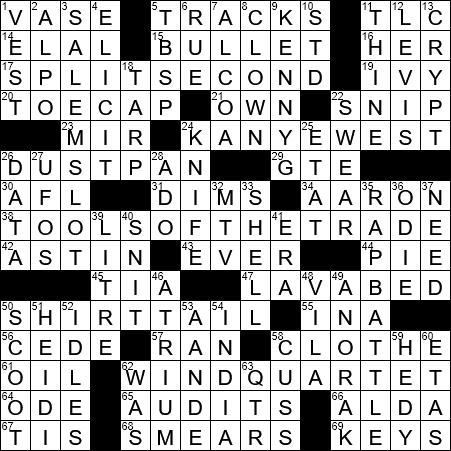 Today’s QUARTET of themed answers each end with a type of WIND:

The Russian Mir space station was a remarkably successful project. It held the record for the longest continuous human presence in space at just under 10 years, until the International Space Station eclipsed that record in 2010. Towards the end of the space station’s life however, the years began to take their toll. There was a dangerous fire, multiple system failures, and a collision with a resupply ship. The Russian commitment to the International Space Station drained funds for repairs, so Mir was allowed to reenter the Earth’s atmosphere and burn up in 2001. “Mir” is a Russian word meaning “peace” or “world”.

The American Football League (AFL) was founded in 1959 as a competitor to the already-established National Football League (NFL). The AFL eventually merged with the NFL, in 1970. It was the competition between the AFL and NFL that gave us the Super Bowl. The first-ever World Championship Game between the champions of the two leagues was held in 1967, a game that we now refer to as Super Bowl I.

38. Comb and scissors, to a stylist : TOOLS OF THE TRADE (giving “trade winds”)

The trade winds are the winds found in the tropics that blow predominantly from the east (from the northeast above the equator, and from the southeast below). Although the trade winds were crucial during the age of sail, allowing the European empires to grow and prosper, the use of the term “trade” had nothing to do with commerce. Rather, the name “trade” was a Middle English word that meant “path, track”, a reference to the predictable courses used by the sailing vessels. It was from these favorable “trade” winds that we began to associate commerce with the term “trade”.

Alan Alda has had a great television career, especially of course as a lead actor in “M*A*S*H”. Alda won his first Emmy in 1972, for playing surgeon Hawkeye Pierce on “M*A*S*H”. He also won an Emmy in 2006 for his portrayal of Presidential candidate Senator Arnold Vinick in “The West Wing”. When it comes to the big screen, my favorite of Alda’s movies is the 1978 romantic comedy “Same Time, Next Year” in which he starred opposite Ellen Burstyn.

The music for the Christmas song “Deck the Halls” is a traditional Welsh tune that dates back to the 16th century. The same tune was used by Mozart for a violin and piano duet. The lyrics with which we are familiar (other than the “f-la-la”) are American in origin, and were recorded in 19th century.

Stephen King’s “’Salem’s Lot” was published in 1975, his second novel. It belongs to the horror genre, so you won’t catch me reading it. The title refers to the Maine town of Jerusalem’s Lot, or ‘Salem’s Lot for short. There’s an interesting story about the actual publication of the first edition. The intended price of $8.95 was changed at the last minute to $7.95, but not all the price changes were made before release. A few copies “escaped” with the dust cover marked $8.95, and they are now worth a lot of money. Go check your bookshelves …

7. Major maker of can material : ALCOA

Saxophonist Kenny G’s full name is Kenneth Bruce Gorelick. Kenny’s “G” might also stand for “golfer”, as in 2006 he was ranked by “Golf Digest” magazine as the number-one golfer working in the field of music.

“Total Request Live” (TRL) is a music video TV show that originally ran on MTV from 1998-2008, and was revived in 2017. The original manifestation of the show included an incredibly popular rundown of the top ten most requested music videos of the day based on votes from viewers.

“Petrol” is the chiefly British-English term used for gasoline. “Petrol” comes via French from the Latin “petroleum”, itself derived from “petra” meaning “rock” and “oleum” meaning “oil”.

“This Old House” first aired in 1979, on PBS, with Bob Vila as host. After ten years on the show, Vila was able to make extra income with commercial endorsements. These earnings caused conflict with commercial-free PBS, and so Vila was replaced by Steve Thomas.

Anoraks aren’t very popular over here in America. Everyone has one in Ireland! An anorak is a heavy jacket with a hood, often lined with fur (or fake fur), and is an invention of the Inuit people.

German-born Heidi Klum was married to the successful English singer, Seal. Klum is a talented lady and has built a multi-faceted career based on her early success as a model. She is the force behind the Bravo reality show called “Project Runway” that has been on the air since 2004. Klum has been nominated 4-5 times for an Emmy for her association with the show. Klum was also signed up as the official ambassador for Barbie in 2009, the 50th anniversary of the Barbie Doll, and for her service that year a Heidi Klum Barbie was produced. She has been adding a touch of class to the judging panel on the show “America’s Got Talent” since 2013.

“Storage Wars” is a reality TV show about buyers looking for great deals when storage lockers are opened due to non-payment of rent.

“The Jungle Book” by Rudyard Kipling was originally published in 1894, and is a collection of adventure stories or fables featuring the animals of the jungle and a young boy named Mowgli. Baloo is a sloth bear who teaches the cubs of a wolf pack the Law of the Jungle. His most challenging pupil however is no lupine, but rather the man-cub Mowgli.

Hedy Lamarr was an American actress who was actually born in Vienna in modern-day Austria. Not only was Lamarr a successful Hollywood performer, during WWII she was the co-inventor of the frequency-hopping spread-spectrum method of transmitting radio signals that is still used to this day in wireless communication. Impressive …