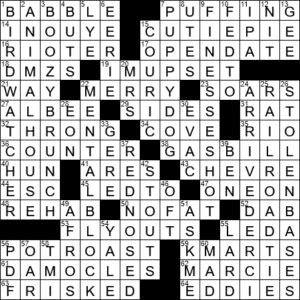 Senator Daniel Inouye was a US Senator for the state of Hawaii and was the President pro tem of the Senate (the US Vice President is the President of the Senate). Given this role, he was the highest-ranking Japanese-American in the country’s history as he was third in the line of succession to the office of US President. Senator Inouye passed away in 2012. Honolulu’s airport was renamed to Daniel K. Inouye International Airport in 2017 in his honor.

A demilitarized zone (DMZ) is usually a border between two countries where military activity is banned according to some treaty between interested parties. The most famous DMZ today has to be the buffer zone between North and South Korea. The Korean DMZ snakes right across the Korean peninsula near the 38th parallel. The centerline of the DMZ is where the front was when the ceasefire came into effect in 1953 after the Korean War. According to the armistice signed, all troops had to move back 2,000 meters from the front line on both sides, creating the DMZ that is in place today. Paradoxically perhaps, the areas on either side of the DMZ form the most heavily militarized border in the world.

“Rio” is a 2011 animated movie about a male blue macaw who is brought to mate with a female blue macaw in Rio de Janeiro, hence the movie’s title. Fans can go see “Rio 2” that was released in 2014.

When we sit at a counter, in a diner say, there’s a connection with money lenders. Back in the mid-1300s, a counter was the table used by a money lender doing business. The term “counter” came into English from Latin via French, ultimately from “computare” meaning “to count”.

The Caucasus is a geographic region lying between the Black Sea and the Caspian Sea on the European-Asian border. The region is home to the Mount Elbrus in the Caucasian Mountains, which is the highest peak in the whole of Europe.

Chèvre is a goat cheese. It takes its name from “chèvre”, the French word for “goat”.

One might go to rehab (rehabilitation) for detox (detoxification).

53 Some near homers : FLYOUTS

That would also be baseball.

Kmart is the third-largest discount store chain in the world, behind Wal-Mart and Target. The company was founded by S. S. Kresge in 1899, with the first outlets known as S. S. Kresge stores. The first “Kmart” stores opened in 1962, with the “K” standing for “Kresge”. Kmart is famous for its promotions known as “blue light specials”, a program first introduced in 1965 and discontinued in 1991. I remember being in a Kmart store soon after coming to live in the US. That evening an employee installed a light stand an aisle away from me, switched on a flashing blue light and there was some unintelligible announcement over the loudspeaker system. I had no idea what was going on …

In the legend “The Sword of Damocles”, Damocles was a member of the court of Dionysius II of Syracuse. Damocles was a bit of a smarmy type and weaseled his way into sitting on the throne of his king so that he could taste the power and privilege that came with the position. The price Damocles had to pay was to sit on the throne under a sword that was suspended by a single hair of a horse’s tail. Such was the tension felt by Damocles that he begged to give up the privileges of the throne.

Cardinals are a family of birds that inhabit the Americas. The northern cardinal is the species from which the family gets the cardinal name. It was named by early settlers from Europe for the red crest on the male, the color of which resembled the color of a Roman Catholic cardinal’s biretta (a square cap).

I really, really don’t do horror films. The one exception perhaps is the original “Halloween” movie, starring Jamie Lee Curtis and Donald Pleasance. To me, this first movie in the “Halloween” series is more in the style of Hitchcock’s “Psycho” whereas the sequels were chock full of gore and graphic violence.

Katie Couric left NBC’s “The Today Show” in 2006 and took over as news anchor for “CBS Evening News”. In doing so, she became the first solo female anchor of a broadcast network evening news program. Couric also has the honor of being the only person to guest-host on “The Tonight Show with Jay Leno”. In fact she “swapped jobs” on that particular day, and Leno filled in for Couric on “The Today Show”.

NBC’s “Today” show first aired way back in 1952 when it was the first “morning show” in the world. The first host of “Today” was Dave Garroway.

Lou Brock was a professional baseball player who played most of his career with the St. Louis Cardinals. Brock broke Ty Cobb’s all-time stolen base record (938) in 1977, and held that record until 1982.

“Unfaithful” is a 2002 drama film with leads played by Richard Gere and Diane Lane. The Hollywood movie is a remake of a French film called “La Femme infidèle” (The Unfaithful Wife).

Ben Crenshaw is a retired professional golfer who was nicknamed “Gentle Ben”. He only won one of the four major championship tournaments, the Masters, but did so twice: in 1984 and 1995.

58 Sarcastic “Thanks for sharing” : TMI