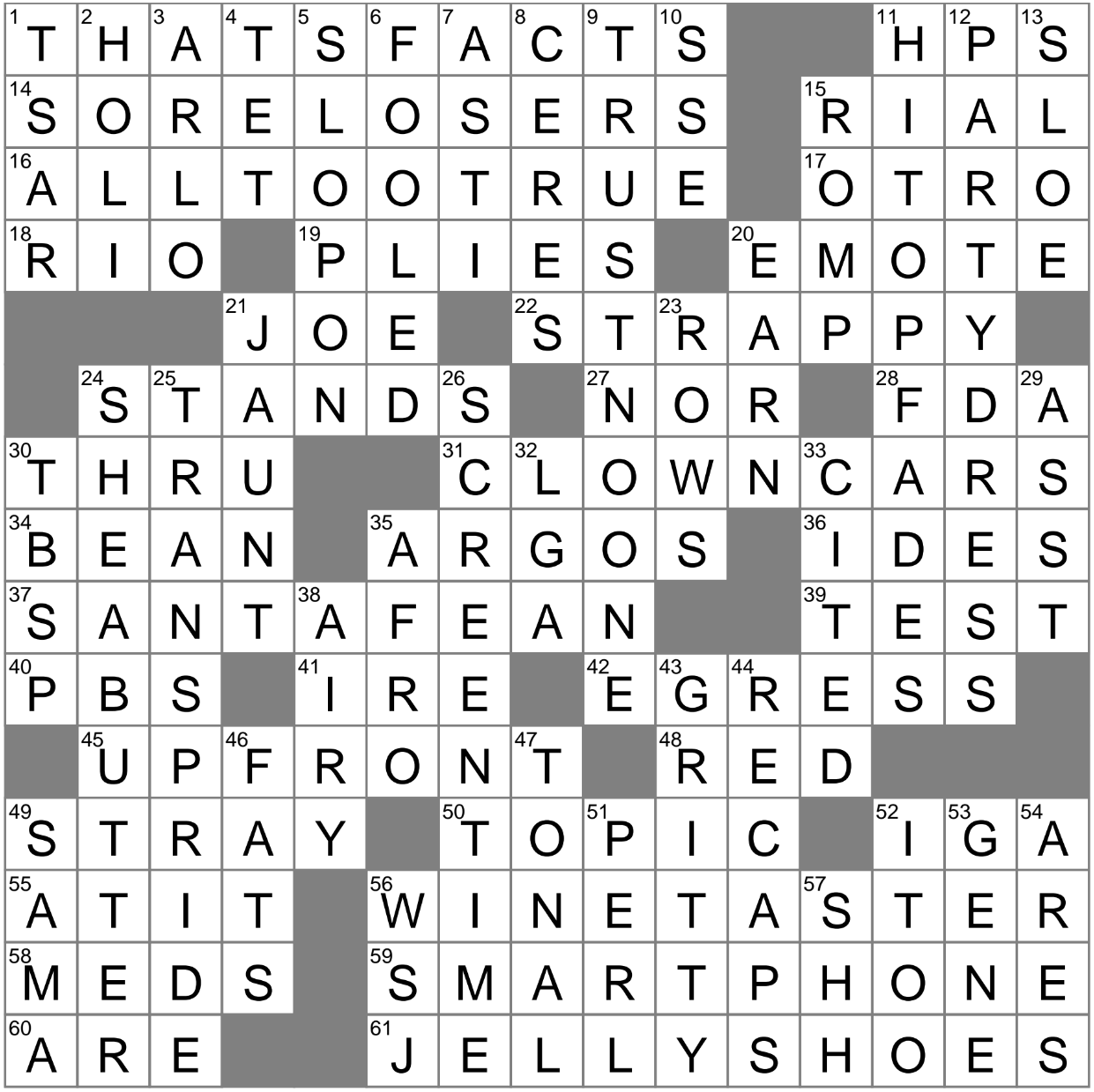 In Spanish, when answering a survey, one “opción” (option) might be “otro” (other).

35 Greek city that’s one of the oldest in Europe : ARGOS

Argos is one of the oldest cities in Greece, and indeed in Europe, having been continuously inhabited for over 7,000 years. In ancient times, Argos was a rival city-state to the powerful Sparta.

Santa Fe is New Mexico’s capital, and the fourth most-populous city in the state (after Albuquerque, Las Cruces and Rio Rancho). Sitting at 7,199 feet above sea level, Santa Fe is the highest state capital in the US. The city’s name translates from Spanish as “Holy Faith”. The full name of the city when it was founded in 1607 was “La Villa Real de la Santa Fe de San Francisco de Asís”, meaning “the Royal Town of the Holy Faith of Saint Francis of Assisi”. It became the capital of the province Santa Fe de Nuevo México in 1610, making Santa Fe the oldest state capital in the US.

“Arthur” is an educational TV show that started airing on PBS in 1996. The title character is an aardvark who regularly introduces children to important social issues such as dyslexia, cancer and autism. “Arthur” is the longest-running children’s animated show on US television, and is the second-longest running of any animated show, behind Fox’s “The Simpsons”.

Barnum’s American Museum opened in New York City in 1841, and sadly burned to the ground in 1865. The attractions in the museum included zoo animals, waxworks as well as theater shows and “freak shows”. Famously, a sign pointing to the exit of the museum read “This Way to the Egress”. Many visitors followed the sign, anxious to see the “egress” exhibit, only to find themselves out on the street!

“All Too Well” is a 2012 song co-written and recorded by Taylor Swift. Swift’s fans love this song, and many regard it as her finest song. It deals with a relationship that’s over. There’s a scarf mentioned in the song a couple of times. At the beginning of the lyrics:

and I left my scarf there at your sister’s house

Towards the end of the song:

But you keep my old scarf from that very first week

Well, the scarf has become a “thing”. The assumption is the relationship is between Swift and her one-time boyfriend Jake Gyllenhall. Multiple hours of airtime have been devoted to answering the question, “Where is the scarf now?”

49 One with a clipped ear, perhaps : STRAY

Trap-neuter-return (TNR) is a controversial program used in some locations as an attempt to control the population of feral cats. Stray cats are live-trapped and then neutered or spayed before being released back into their environment. While the cat is under anesthesia, it is usually vaccinated and the tip of the ear is removed. Ear-tipping is used to identify those cats that have been processed through the program.

Iga Swiatek is a professional tennis player, and the first from Poland to win a major singles title (the French Open in 2020).

Many apps on phones are now using “swipe right” and “swipe left” actions to indicate “like” and dislike”. I suppose Tinder is the most famous “swipe right/swipe left” app in use today.

Jelly shoes are relatively cheap footwear made from injection-molded PVC plastic that is sometimes referred to as jelly rubber. “Jelly Shoes” was a brand name used by a company that operated in the 1980s.

The year 1917 saw two revolutions in Russia, with the pair collectively called “the Russian Revolution”. As a result of the February Revolution that centered on Petrograd, the last Emperor of Russia (Tsar Nicholas II) abdicated and members of the Imperial parliament took control of the country, forming the Russian Provisional Government. The Provisional Government was itself overthrown in the October Revolution, which was led by Vladimir Lenin and the Bolshevik party.

Holi is a Hindu festival, celebrated in spring, that is also known as the Festival of Colours.

Thit kho trung is a dish from Vietnamese cuisine consisting of marinated pork and boiled eggs braised in coconut juice. Even though it is considered an everyday meal, it is also a traditional offering during Vietnamese New Year.

Ceres was a Roman goddess of agriculture and fertility, and was the counterpart of the Greek goddess Demeter. Our modern word “cereal” comes from the name “Ceres”.

The city of Beverly Hills, California was named after Beverly Farms in Beverly, Massachusetts and also after the hills in that part of California.

The California city of Long Beach is home to the second-busiest container port in the nation. Anyone visiting the waterfront can tour the famous transatlantic liner RMS Queen Mary, which has been docked there since 1967.

A jaunt is a short pleasure trip, although back in the 1500s, the word “jaunt” described a tiresome journey. Back then, one would jaunt a horse, meaning that one tired it out by riding it back and forth.

Shea butter is a common moisturizer and lotion used as a cosmetic. It is a fat that is extracted from the nut of the African shea tree. There is evidence that shea butter was used back in Cleopatra’s Egypt.

L’Occitane en Provence is a French supplier of personal care products that was founded in 1976. The company name translates as “The Woman from Occitania in Provence”. Occitania is a historical region in Europe that covers much of the southern part of France, Monaco, and a small part of Spain and northern Italy.

The transgender community has widely adopted a blue, pink and white flag to represent transgender pride. The flag was designed by transgender activist and US Navy veteran Monica Helms in 1999. It comprises five horizontal stripes: light blue, pink, white, pink and light blue. The light blue stripes at the top and bottom are the traditional color associated with baby boys. The abutting pink stripes are the traditional color associated with baby girls. The white stripe in the center represents those who are transitioning, or those who consider themselves gender-neutral.

30 Largest of a certain kitchen set, for short : TBSP

Misty Knight is a character introduced by Marvel Comics in 1975. She has been portrayed in several Marvel TV shows by actress Simone Missick.

Gritty is the mascot of the Philadelphia Flyers hockey team. He is a youngster, relative to other NHL mascots, having made his debut appearance in 2018.

Antoine “Fats” Domino was born and raised in New Orleans, with Creole as his first language. He made it into the big time in 1949 when he recorded an early rock and roll record called “The Fat Man”. That record sold over a million copies, the first rock and roll record to achieve that milestone.

“For Sama” is an Oscar-nominated 2019 documentary set in Aleppo in Syria. The focus of the film is five years in the life of journalist and rebel Waad al Kateab. During those five years, she marries one of the few doctors left in the city due to the Battle of Aleppo, and gives birth to their daughter Sama.

Perl is a programming language designed to ease the process of writing reports. Programmer Larry Wall developed “Pearl” in 1987, but discovered that there was already a programming language with that name, and so changed it to “Perl”. A common backronym for “Perl” is “Practical Extraction and Report Language”.

Someone described as truculent is aggressively self-assertive. The term “truculent” comes from the Latin “trux” meaning “fierce, rough”.