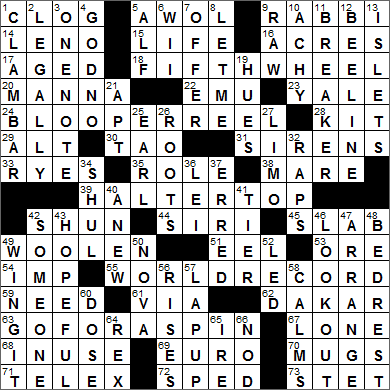 CROSSWORD SETTER: Gary Cee
THEME: Go for a Spin … each of today’s themed answers ends with something that can SPIN:

14. Fallon’s predecessor LENO
Jay Leno was born James Leno in New Rochelle, New York. Jay’s father was the son of Italian immigrants, and his mother was from Scotland. Leno grew up in Andover, Massachusetts and actually dropped out of school on the advice of a high school guidance counsellor. However, years later he went to Emerson college and earned a Bachelor’s degree in speech therapy. Leno also started a comedy club at Emerson in 1973. Today Jay Leno is a car nut and owns about 200 vehicles of various types. You can check them out on his website: www.jaylenosgarage.com.

Jimmy Fallon was a cast member for a number of years on “Saturday Night Live” before getting his own talk show in 2009, “Late Night with Jimmy Fallon”. Fallon took over “The Tonight Show” from Jay Leno in 2014.

17. Like single-malt scotch AGED
In order to be labelled as “single-malt” scotch, the whisky must come from a single distillery (hence “single”), and from a mash of malted grain (hence “malt”) that has been processed in a pot still.

20. Food from heaven MANNA
According to the Book of Exodus, manna was a food eaten by the Israelites as they traveled out of Egypt. It “fell” to Earth during the night six days a week, and was gathered in the morning before it had time to melt.

22. Long-necked bird EMU
The emu has had a tough time in Australia since man settled there. There was even an “Emu War” in Western Australia in 1932 when migrating emus competed with livestock for water and food. Soldiers were sent in and used machine guns in an unsuccessful attempt to drive off the “invading force”. The emus were clever, breaking their usual formations and adopting guerrilla tactics, operating as smaller units. After 50 days of “war”, the military withdrew. Subsequent requests for military help for the farmers were ignored. The emus had emerged victorious …

23. Ivy League school YALE
The term “Ivy League” originally defined an athletic conference, but now it is used to describe a group of schools of higher education that are associated with both a long tradition and academic excellence. The eight Ivy League Schools are: Brown, Columbia, Cornell, Dartmouth, Harvard, Princeton, the University of Pennsylvania, and Yale.

28. Pioneer Carson KIT
Kit Carson was a frontiersman who moved west from Missouri when he was just 16 years old. Kit Carson’s life was immortalized in the novels of John C. Fremont, an explorer who hired Carson as a guide for his travels through California, Oregon and Nevada. Carson later served with the US Army. He is thought to be the only American to have achieved the rank of general without being able to read or write.

30. Eastern path TAO
The Chinese character “tao” translates as “path”, but the concept of Tao signifies the true nature of the world.

38. Stable female MARE
There are lots of terms to describe horses of different ages and sexes, it seems:

39. Summer blouse HALTER TOP
A blouse is a loose-fitting shirt, particularly worn by women or children. The term “blouse” is French, and originally described a peasant’s smock.

44. iPhone voice-activated app SIRI
Siri is software application that works with Apple’s iOS operating system. “Siri” is an acronym standing for Speech Interpretation and Recognition Interface. You’ve probably seen the ads on television, with folks talking to their iPhones asking for information and responding with a voice. I hear that Google is a little scared by Siri, as Siri is non-visual. There’s no need to touch a screen or a keyboard to work with Siri, no opportunity to click on one of Google’s ads! By the way, voice-over artist Susan Bennett recently revealed herself as the female American voice of Siri. The British version of Siri is called Daniel, and the Australian version is called Karen. Also, “Siri” is a Norwegian name meaning “beautiful woman who leads you to victory”, and was the name the developer had chosen for his first child.

62. Capital of Senegal DAKAR
The Republic of Senegal is a country on the far western coast of Africa. For many years Senegal was a French colony, gaining independence in 1960. The capital of Senegal is Dakar, a city located on the Cap-Vert Peninsula that juts out into the Atlantic Ocean.

69. Currency symbolized by € EURO
The euro sign (&#8364) looks like a letter C, but with two horizontal lines drawn across the middle. Inspiration for the design comes from the Greek letter epsilon.

71. Fax forerunner TELEX
Telex grew out of the world of the telegraph. What Telex brought to telegraphy was the ability to route messages. Instead of having to talk to an operator to route a particular message to the intended party, the user of a telex could route the message directly to another telex machine by way of a rotary dial, very similar to that on a telephone.

73. Editor’s “Leave it in” STET
“Stet” is a Latin word meaning “let it stand”. In editorial work, the typesetter is instructed to disregard any change previously marked by writing the word “stet” and then underscoring that change with a line of dots or dashes.

Down
5. Sitcom E.T. ALF
“ALF” is a sitcom that aired in the late eighties. ALF is a hand-puppet, supposedly an alien from the planet Melmac that crash-landed in a suburban neighborhood. “ALF” stands for “alien life form”.

6. PlayStation 3 rival WII
The Wii is the biggest-selling game console in the world.

10. In need of aspirin ACHY
Aspirin was a brand name for the drug acetylsalicylic acid. Aspirin was introduced by the German drug company Bayer AG in the late 1800s. As part of the war reparations paid by Germany after WWI, Bayer AG lost the use of the trademark Aspirin (and they also lost use of the trademark “Heroin”!) and it became a generic term.

12. Direct route BEELINE
To make a beeline for somewhere or something, one takes a direct route. The term derives from excellent homing instinct of bees.

21. Abbr. in many an urban address APT
Apartment (apt.)

25. __ of Sandwich EARL
Meats placed between slices of bread was first called a sandwich in the 18th century, named after the Fourth Earl of Sandwich. The Earl was fond of eating “sandwiches” while playing cards at his club.

34. Synagogue SHUL
Shul is another word for a synagogue. “Shul” is the term mostly used in Orthodox Judaism, “synagogue” in Conservative Judaism, and “temple” in Reform Judaism.

49. Proceed without preparation WING IT
“To wing it” is to improvise, to do something with sufficient preparation. There is some debate about the terms etymology, but I like the idea that it came from the theater. An actor would be described as winging it if he or she learned lines while standing in the wings just before going on stage.

50. Smoked salmon NOVA
Nova lox is salmon that has been cured with a mild brine and then cold-smoked. The term originally applied to salmon from Nova Scotia.

66. Buddy of Wynken and Blynken NOD
“Wynken, Blynken and Nod” is a children’s poem written by Eugene Field, first published in 1889. The original title of the work was “Dutch Lullaby”.