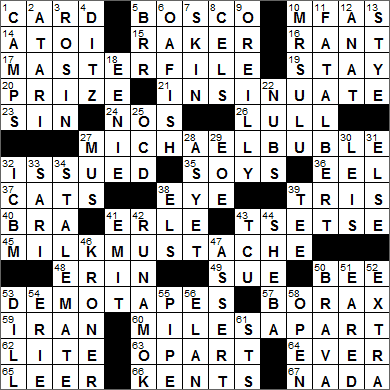 CROSSWORD SETTER: Ed Sessa
THEME: Miles Apart … each of today’s themed answers has the letter sequence MILES divided into two parts, with one part at the start of the answer, and the other at the end. We have MILES split APART:

14. Yours, to Yves A TOI
“À toi” is the French term for “yours”, when talking to someone with whom one is familiar. “À toi” literally means “to you”.

27. Canadian crooner with four Grammys MICHAEL BUBLE
Michael Bublé is a singer from Burnaby in British Columbia. He is of Italian descent on his father’s side. Bublé has held dual Italian-Canadian citizenship since 2005.

35. Protein-rich beans SOYS
What are known as soybeans here in the US are called “soya beans” in most other English-speaking countries. So, I drink soy milk here in America, but when I am over in Ireland I drink “soya milk”.

39. “Divergent” heroine __ Prior TRIS
Tris Prior is the main protagonist in “The Divergent Series” of movies, and is played by actress Shailene Woodley.

“The Divergent Series” of movies is based on the “Divergent” novels written by Veronica Roth. The movies and novels are set in a post-apocalyptic version of Chicago called the Divergent Universe. The story is about a citizenry that is divided into five different factions based on personality traits. The critics weren’t crazy about the first movie in the series, but I really enjoyed it …

41. Oil magnate Halliburton ERLE
Erle P. Halliburton was a businessman who made his fortune in the oil business. Halliburton founded the New Method Oil Well Cementing Company in 1919, which changed its name after his death to Halliburton Company.

43. Feared African fly TSETSE
Tsetse flies live on the blood of vertebrate mammals. The name “tsetse” comes from Tswana, a language of southern Africa, and translates simply as “fly”. Tsetse flies are famous for being carriers of the disease known as “sleeping sickness”. Sleeping sickness is caused by a parasite which is passed onto humans when the tsetse fly bites into human skin tissue. If one considers all the diseases transmitted by the insect, then the tsetse fly is responsible for a staggering quarter of a million deaths each year.

48. Home to Sean O’Casey ERIN
Seán O’Casey was an Irish playwright noted for his works exploring the plight of the working class in Dublin. O’Casey’s most famous works are “Juno and the Paycock” and “The Plough and the Stars”.

57. Mineral used in water softening BORAX
Borax is also known as sodium borate, and is a salt of boric acid. Borax is a white powder that dissolves easily in water. The compound has many uses, for example as an antifungal agent, water-softening agent and as an antiseptic. Actor and future US president Ronald Reagan used to tout 20 Mule Team Borax that was used as a laundry product.

62. Like some beers LITE
The first light beer was produced by Chicago’s Meister Brau brewery in the sixties. Miller took over Meister Brau, reformulated the light beer using the same process and became the first of the big breweries to come out with a light beer, “Lite Beer from Miller” introduced in 1973. There really wasn’t a serious competitor to Miller Lite until Anheuser-Busch finally came up with a process and a product in 1982 that they called Bud Light.

66. Smallville family KENTS
Smallville, Kansas is the town on Earth in which Superman grew up (as Clark Kent). One of Clark’s best friends in Smallville, and the romantic interest of his youth, was Lana Lang.

67. Zilch NADA
The word “nothing” translates to “nada” in Spanish.

Down
2. Centipede video game creator ATARI
Centipede is an arcade game from Atari (it was my favorite!). The game was designed by Ed Logg and Dona Bailey, with Bailey being one of the few female game designers back then (it was released in 1980). Perhaps due to her influence, Centipede was the first arcade game to garner a significant female following.

3. Pitcher’s gripping aid ROSIN
Rosin is a solid form of resin derived from plant sources. Rosin is formed into cakes that players of stringed instruments use to rub along the hairs of their bows to help improve sound quality. The rosin increases the degree of friction between the strings and the bow. That same friction-increasing property comes into play when baseball pitchers use rosin to get a better grip on the ball.

8. Cartoon collectibles CELS
In the world of animation, a cel is a transparent sheet on which objects and characters are drawn. In the first half of the 20th century the sheet was actually made of celluloid, giving the “cel” its name.

9. “No Spin Zone” newsman O’REILLY
Bill O’Reilly is best known as the host of “The O’Reilly Factor” on the Fox News Channel. O’Reilly’s positions are very much on the right side of the political spectrum, with at least one notable exception, his opposition to the death penalty. He suggests that convicted murderers should be locked up without the possibility of parole, in a military prison with forced labor for eight hours a day.

10. Enterprise helmsman, to Kirk MR SULU
Mr Sulu was played by George Takei in the original “Star Trek” series. Takei has played lots of roles over the years, and is still very active in television. Did you know that he appeared in the 1963 film, “Pt-109”? He played the helmsman steering the Japanese destroyer that ran down John F. Kennedy’s motor torpedo boat.

11. “Hey hey hey!” toon FAT ALBERT
Fat Albert is a character who was created by comedian Bill Cosby. The character starred in an animated television series called “Fat Albert and the Cosby Kids” that originally aired from 1972 to 1085. Fat Albert was voiced by Bill Cosby himself, and his catchphrase was “hey hey hey!”

12. Gross subj.? ANAT
“Gross anatomy” is a the study of anatomical structures that can be observed with the naked eye. Other branches of anatomy are embryology (the anatomy of embryos) and neuroanatomy (the anatomy of the nervous system).

18. Counting word in a rhyme EENIE

25. Med. condition with repetitive behavior OCD
Apparently obsessive-compulsive disorder (OCD) is the fourth most commonly diagnosed mental disorder, making it about as common as asthma.

32. Long-range nuke ICBM
An Intercontinental Ballistic Missile (ICBM) is a ballistic missile with the range necessary to cross between continents. Being ballistic (as opposed to a cruise missile) an ICBM is guided during the initial launch phase, but later in flight just relies on thrust and gravity to arrive at its target. It is defined as intercontinental as it has a range greater than 3,500 miles. ICBMs are really only used for delivering nuclear warheads. Scary stuff …

33. Rani’s wrap SARI
“Raja” (also “rajah”) is word derived from Sanskrit that is used particularly in India for a monarch or princely ruler. The female form is “rani” (also “ranee”) and is used for a raja’s wife.

34. Deadlock STALEMATE
“Stalemate” is a term used in chess when one player (who is not in check) cannot make a legal move. A game of chess with a stalemate is declared a draw. We use the term metaphorically for a no-win situation in general.

42. Go wild RUN AMOK
The phrase “to run amok” (sometimes “to run amuck”) has been around since the 1670s and is derived from the Malay word for “attacking furiously”, “amuk”. The word “amok” was also used as a noun to describe Malay natives who were “frenzied”. Given Malaya’s troubled history, the natives probably had good reason for that frenzy …

43. Ft. Worth campus TCU
Texas Christian University (TCU) is a private school in Fort Worth, Texas. TCU used to be called AddRan Male & Female, named after an AddRan Clark, the son of Addison Clark who died at the age of 3-years-old from diphtheria. Poor young AddRan was named after his father and his brother, Addison and Randolph.

44. Queen of __: noted visitor of King Solomon SHEBA
Sheba is referenced in the Bible several times. The “Queen of Sheba” is mentioned as someone who traveled to Jerusalem to behold the fame of King Solomon. No one knows for sure where the kingdom of Sheba was located, although there is evidence that it was actually the ancient Semitic civilization of Saba. The Sabeans lived in what today is Yemen, on the Arabian Peninsula.

46. Copenhagen coins KRONER
“Krone” translates into English as “crown”, and was the name given to coins that bore the image of the monarch in several countries. Today, the krone is the name given to the currency of Norway and of Denmark. Some of the Norwegian and Danish kroner have holes in the middle, giving them a “doughnut” or “torus” shape.

Copenhagen is the largest city and the capital of Denmark. I have never visited Copenhagen, but I hear it is a wonderful metropolis with a marvelous quality of life. The city is also very environmentally friendly, with over a third of its population commuting to work by bicycle.

54. Albany-to-Buffalo canal ERIE
The Erie Canal runs from Albany to Buffalo in the state of New York. What the canal does is allow shipping to proceed from New York Harbor right up the Hudson River, through the canal and into the Great Lakes. When it was opened in 1825, the Erie Canal had immediate impact on the economy of New York City and locations along its route. It was the first means of “cheap” transportation from a port on the Atlantic seaboard into the interior of the United States. Arguably it was the most important factor contributing to the growth of New York City over competing ports such as Baltimore and Philadelphia. It was largely because of the Erie Canal that New York became such an economic powerhouse, earning it the nickname of “the Empire State”. Paradoxically, one of the project’s main proponents was severely criticized. New York Governor DeWitt Clinton received so much ridicule that the canal was nicknamed “Clinton’s Folly” and “Clinton’s Ditch”.

56. Spirited style ELAN
Our word “élan” was imported from French, in which language the word has a similar meaning to ours, i.e “style” or “flair”.