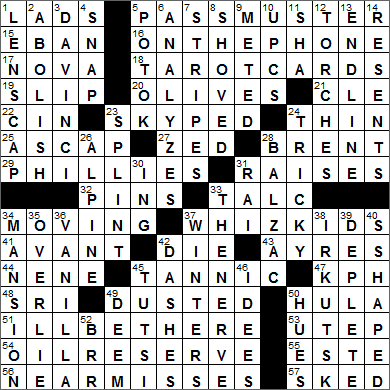 Today’s Wiki-est, Amazonian Googlies
Across
1. Chaps LADS
“Chap” is an informal term for “lad, fellow”, especially in England. The term derives from “chapman”, an obsolete word meaning “purchaser” or “trader”.

5. Measure up PASS MUSTER
“To pass muster” means “to be deemed acceptable”. One musters troops, often for inspection. So, the original meaning of “pass muster” was to “get through a military inspection successfully”.

15. “My Country” author EBAN
“My Country: the story of modern Israel” is a 1972 book authored by Israeli diplomat and politician Abba Eban.

17. Stellar phenomenon NOVA
A nova is basically a star that suddenly gets much brighter, gradually returning to its original state weeks or even years later. The increased brightness of a nova is due to increased nuclear activity causing the star to pick up extra hydrogen from a neighboring celestial body. A supernova is very different from a nova. A supernova is a very bright burst of light and energy created when most of the material in a star explodes. The bright burst of a supernova is very short-lived compared to the sustained brightness of a nova.

Tarot cards have been around since the mid-1400s, and for centuries were simply used for entertainment, as a game. It has only been since the late 1800s that the cards have been used by fortune tellers to predict the future.

21. Airport NW of PIT CLE
Cleveland Hopkins International Airport (CLE) was founded in 1925. In 1930, Cleveland was home to the first air traffic control tower in the country, as well as the first airfield lighting system.

22. 1975-’76 World Series champs, on scoreboards CIN
The Red Scare (i.e. anti-communist sentiment) following WWII had such an effect on the populace that it even caused the Cincinnati baseball team to change its name from the Reds. The team was called the Cincinnati Redlegs from 1953-1958, as the management was fearful of losing money due to public distrust of any association with “Reds”.

23. Called, nowadays SKYPED
The main feature of the Skype application is that it allows voice communication to take place over the Internet (aka VoIP). Skype has other features such as video conferencing and instant messaging, but the application made its name from voice communication. Skype was founded by two Scandinavian entrepreneurs and the software necessary was developed by a team of engineers in Estonia. The development project was originally called “Sky peer-to-peer” so the first commercial name for the application was “Skyper”. This had to be shortened to “Skype” because the skyper.com domain name was already in use.

27. Piece of Plymouth pizza? ZED
There are two letters Z (zee) in the word “pizza”, and over in Plymouth in the UK, “zee” is written as “zed”.

Plymouth is a port city on the coast of Devon in the UK. Plymouth was the point of departure of the Mayflower Pilgrims.

28. Former National Security Advisor Scowcroft BRENT
Retired Air Force Lieutenant General Brent Scowcroft served as National Security Advisor under Presidents Gerald Ford and George H. W. Bush. President Bush initiated the “Scowcroft Award” while he was in office, a prize given to the person “who most ostentatiously fell asleep in a meeting with the president”. Apparently the running joke was that Scowcroft exhibited the necessary qualities. It’s nice to see that our statesmen have a sense of humor!

29. Citizens Bank Park team PHILLIES
I am proud to say that I made it to Philadelphia’s historic Veterans Stadium for a baseball game on a road trip quite a few years ago. The Phillies played their first game there in April 1971, and their last in September 2003. The stadium was demolished in 2004, and the team now plays at Citizens Bank Park, known locally as “the Bank”.

32. Alley group PINS
Bowling has been around for an awfully long time. The oldest known reference to the game is in Egypt, where pins and balls were found in an ancient tomb that is over 5,000 years old. The first form of the game to come to America was nine-pin bowling, which had been very popular in Europe for centuries. In 1841 in Connecticut, nine-pin bowling was banned due to its association with gambling. Supposedly, an additional pin was added to get around the ban, and ten-pin bowling was born.

37. Youthful nickname for the 1950 29-Across WHIZ KIDS
The 1950 Philadelphia Phillies baseball team was nicknamed “the Whiz Kids”, a reference to the team’s youth. The average age of the players was only 26.4 years, but they still managed to win the National League pennant that season.

41. Opposite of après AVANT
In French, “avant” (before) comes ahead of “après” (after).

42. Monopoly item DIE
The numbers on dice are arranged so that the opposite faces add up to seven. Given this arrangement, the numbers 1, 2 and 3 all meet at a common vertex. There are two ways of arranging the 1, 2 and 3 around the common vertex, a so called right-handed die (clockwise 1-2-3) or a left-handed die (counterclockwise 1-2-3). Traditionally, dice used in Western cultures are right-handed, whereas Chinese dice are left-handed. Quite interesting …

43. ’30s-’40s Kildare portrayer AYRES
The Hollywood actor Lew Ayres got his big break in “All Quiet On the Western Front”. Famously, he also played Dr. Kildare in several movies. Ayres’ private life wasn’t too dull. He was married three times, Lola Lane and Ginger Rogers being wives one and two. Ayres was also the man for whom actress Jane Wyman left her husband Ronald Reagan, although the Ayres-Wyman relationship didn’t last very long.

44. Canada goose relative NENE
The bird called a nene is a native of Hawaii, and is also known as the Hawaiian goose. The name “nene” is imitative of its call. When Captain Cook landed on the islands in 1778, there were 25,000 nene living there. By 1950, the number was reduced by hunting to just 30 birds. Conservation efforts in recent years have been somewhat successful.

45. Kind of acid in red wine TANNIC
Tannic acid is a specific type of tannin.

Some red wines can have an astringent taste, a dry and puckering feeling, because of the presence of tannins. Tannins occur naturally in plants, probably as a defensive measure against predators who shy away from the astringent. The word “tannin” comes from an Old German word for oak or fir tree, as in “Tannenbaum”.

48. Indian address SRI
“Sri” is a title of respect for a male in India.

50. Symbolic dance HULA
Hula is the name of the Polynesian dance. The chant or song that the dance illustrates, that’s known as the mele.

51. Jackson 5 song covered by Mariah Carey I’LL BE THERE
The Jackson 5 singing group was originally made up of brothers Tito, Jackie, Jermaine, Marlon and Michael.

53. Sch. whose mascot is Paydirt Pete UTEP
The University of Texas at El Paso (UTEP) was founded in 1914, originally as the Texas State School of Mines and Metallurgy. To this day there is a mine shaft on the campus, and the mascot of the school’s sports teams is Paydirt Pete, a prospector from the mining industry.

54. Canadian asset OIL RESERVE
By some measures, the country with the largest oil reserves is Venezuela, followed by Saudi Arabia and then Canada. The United States is eleventh on that list.

55. Town near Padua ESTE
Este is a town in the Province of Padua in the north of Italy. The town gave its name to the House of Este, a European princely dynasty. The House of Hanover that ruled Britain from 1714 to 1901, when Queen Victoria died, was perhaps the most notable branch of the House of Este.

57. Slate, briefly SKED
“To slate” is to propose or schedule, a meaning that has existed since the 1880s.

Down
3. Fictional code name DA VINCI
“The Da Vinci Code” is an entertaining read, written by Dan Brown. Brown’s first book to feature the character Robert Langdon was “Angels & Demons”, which was an even better story in my opinion …

5. “The Chosen” author POTOK
Chaim Potok was a Jewish American author. Potok’s most famous novel is “The Chosen”, which recounts the life of a Jewish youth in New York City during WWII.

10. Bar IDs UPCS
UPC stands for Universal Price Code or Universal Product Code. The first UPC-marked item to get scanned in a store was on June 26, 1974 at 08:01 a.m. at Marsh’s supermarket in Troy, Ohio. It was a 10-pack of Wrigley’s Juicy Fruit chewing gum …

12. Flashlights, across the pond TORCHES
Portable lighting devices have been called “torches” for centuries. In most English-speaking parts of the world, the use of the term was extended to the battery-powered devices that replaced lights that used flames. Here in North America, the term “flashlight” arose. This was because the original lamps that ran on zinc-carbon batteries had to be rested, switched off for a period as the batteries could not provide a steady current. The term “flashlight” was coined as the lamps could only be used in brief flashes.

14. Is in high dudgeon RESENTS
“Dudgeon” is a noun describing a state of sullen, ill humor.

28. “The Human Comedy” author BALZAC
Honoré de Balzac was a French novelist and playwright from the 19th century. Balzac wrote a huge collection of related novels called “La Comédie humaine” (The Human Comedy). The work includes 91 stories, novels and essays, written from 1815 to 1848. Balzac also left 46 unfinished works as part of the collection.

30. Big initials in banking ING
ING is a huge Dutch banking institution created via a merger in 1991. The company headquarters is in a spectacular building in Amsterdam called simply ING House. ING stands for Internationale Nederlanden Groep.

34. Kennedy Compound component MANSION
The Kennedy Compound is a 6-acre waterfront property on Cape Cod that includes three large houses that have been in the Kennedy family for decades. The clan’s patriarch Joseph P. Kennedy bought the first home the 1920s. Joe’s son, future President John F. Kennedy, bought the second home next door in 1956. Jack’s brother Ted bought the third home in 1959.

37. Mearth portrayer in “Mork & Mindy” WINTERS
In the sitcom “Mork & Mindy”, the title characters had a child named Mearth. Mearth was an Orkan, like his father, and so aged backwards in time. Mearth had an adult body, but the mind of a child. Mearth was played by comedian and actor Jonathan Winters.

38. Siberian metropolis IRKUTSK
Irkutsk is one of the largest cities in Siberia. Much of Irkutsk’s rich cultural heritage is owed to the policy of internal exile to Siberia after the Decembrist revolt against Tsar Nicholas I in 1825. Many of those exiled were artists, nobles and high-ranking military officers.

45. Rwandan ethnic group TUTSI
The Tutsi are the second largest population of people in Rwanda, with the Hutu being the largest group. The bloody conflict that has existed between the Tutsi and Hutu peoples dates back to about 1880 when Catholic missionaries arrived in the region. The missionaries found that they had more success converting the Hutus than the Tutsi, and when the Germans occupied the area during WWI they confiscated Tutsi land and gave it to Hutu tribes in order to reward religious conversion. This injustice fuels fighting to this very day.