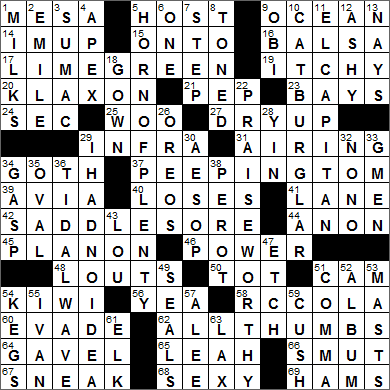 CROSSWORD SETTER: Mark Bickham
THEME: All Thumbs … ALL of today’s themed answers end with a word that often precedes THUMB:

Today’s Wiki-est, Amazonian Googlies
Across
1. Flat-topped hill MESA
“Mesa” is the Spanish for “table” and is of course is how we get the term “mesa” that describes the geographic feature. A mesa is similar to a butte. Both are hills with flat tops, but a mesa has a top that is wider than it is tall. A butte is a much narrower formation, taller than it is wide.

9. Arctic or Antarctic OCEAN
The Arctic Ocean is in the north polar region, and is almost completely covered by sea ice in the winter. As we all know, the amount of sea ice covering the Arctic Ocean during the summer has been dropping in recent times as a consequence of climate change.

The Southern Ocean is sometimes referred to as the Antarctic Ocean. It is the body of water that surrounds the landmass of Antarctica.

16. Modeler’s wood BALSA
Balsa is a very fast growing tree that is native to parts of South America. Even though balsa wood is very soft, it is actually classified as a hardwood, the softest of all the hardwoods (go figure!). Balsa is light and strong, so is commonly used in making model airplanes. Amazingly, in WWII a full-size British plane, the de Havilland Mosquito, was built largely from balsa and plywood. No wonder they called it “The Wooden Wonder” and “The Timber Terror”.

17. Color named for a fruit LIME GREEN (giving “green thumb”)
To have a “green thumb” or “green fingers” is to be good at gardening.

19. Like a mosquito bite ITCHY
“Mosquito” is the Spanish for “little fly”. The female mosquito actually has to have a “blood meal” before she is able to lay her eggs.

20. “Ah-oo-gah” horn KLAXON
A klaxon is a loud horn, and “klaxon” is one of those words derived from the name of a particular brand. The original klaxon was a car horn manufactured and sold by the Klaxon Company.

29. Prefix with red INFRA-
At either end of the visible light spectrum are the invisible forms of radiation known as infrared (IR) light and ultraviolet (UV) light. IR light lies just beyond the red end of the visible spectrum, and UV light lie just below the violet end.

31. What a musty room needs AIRING
Something described as “musty” has as stale or moldy odor. The term derives from an obsolete word “moisty”, as in “moist”.

34. Ancient invader of Rome GOTH
The East Germanic tribe called the Goths has two main branches, called the Ostrogoths and the Visigoths. The Visigothic capital was the city of Toulouse in France, whereas the Ostrogoth capital was the Italian city of Ravenna just inland of the Adriatic coast. It was the Visigoths who sacked Rome in 410 CE, heralding the fall of the Western Roman Empire.

37. Legendary Lady Godiva watcher PEEPING TOM (giving “Tom Thumb”)
In the legend of Lady Godiva, a noblewoman rode naked through the streets of Coventry in England, basically as a dare from her husband in return for relieving the taxes of his tenants. Lady Godiva issued instructions that all the town’s inhabitants should stay indoors while she made her journey. However, a tailor in the town named Tom disobeyed the instructions by boring holes in the shutters on his windows, and “peeped”. As a result, Peeping Tom was struck blind, and the term “peeping Tom” has been in our language ever since.

39. Converse competitor AVIA
The Avia brand name for athletic shoes was chosen as “avia” is the Latin word for “to fly”, and suggests the concept of aviation. Avia was founded in Oregon in 1979.

The Converse shoe company was founded in Malden, Massachusetts in 1908 by one Marquis Mills Converse. The company grew steadily, and introduced its first athletic shoe in 1915, a shoe designed for playing tennis. The Converse brand really took off in 1917 with the launch of a shoe designed especially for basketball, which was called the “All Star”. Basketball player Chuck Taylor really liked the new design and was hired by Converse as a salesman and a spokesman. Taylor suggested a refinement to the design, including a patch on the side to protect the ankle. A star logo (representing the “All-Star” brand) was added to the patch, with Chuck Taylor’s signature being added to the logo as an endorsement in 1923. The Chuck Taylor All-Star became the best selling basketball shoe of all time, and the star became the logo for the Converse company.

42. Stiff from horseback riding SADDLESORE (giving “sore thumb”)
Someone or something that “sticks out like a sore thumb” is easily noticed.

44. Soon, quaintly ANON
“Anon” originally meant “at once” and evolved into today’s meaning of “soon” apparently just because the word was misused over time.

54. New Zealand fruit KIWI
What we call kiwifruit today used to be called a Chinese gooseberry. Marketing folks in the fifties decided to call it a “melonette”, and then New Zealand producers adopted the name “kiwifruit”.

58. Pepsi competitor RC COLA
“Nehi Corporation” was the nickname for the Chero-Cola/Union Bottle Works that introduced the Nehi drink in 1924. Years later the company developed a new brand, Royal Crown Cola (also known as RC Cola). By 1955, RC Cola was the company’s flagship product, so the “Nehi Corporation” became the “Royal Crown Company”. In 1954, RC Cola became the first company to sell soft drinks in cans.

64. Judge’s hammer GAVEL
A gavel is a small hammer that is rapped on a table or desk to call a meeting to order, or perhaps to signify a sale at an auction.

65. Jacob’s first wife LEAH
According to the Bible, Leah was one of the two wives of Jacob, the other being Leah’s sister Rachel. Jacob’s intention had been to marry Rachel, but the Leah and Rachel’s father “switched” his daughters and provided Leah as the veiled bride. Jacob married Rachel a week later, and lived with the two wives concurrently.

66. Lewd material SMUT
“Smut” means “dirt, smudge” and more recently “pornographic material”. The term comes from the Yiddish “schmutz”, which is a slang word used in English for dirt, as in “dirt on one’s face”.

68. Like centerfolds SEXY
In the magazine world, a centerfold is large illustration that is folded to form the central spread of a publication. Famously, Hugh Hefner used the centerfold of “Playboy” magazine for a large color photograph of a nude model, and since then the term “centerfold” has been used for a model who has featured in such a layout. Playboy’s first centerfold model was Marilyn Monroe.

Down
2. Author Zola EMILE
The most famous work of French writer Émile Zola is his 1898 open letter “J’Accuse!” written to then French president Félix Faure. The letter was published on the front page of a leading Paris newspaper, and accused the government of anti-Semitism in its handling of the trial of Captain Alfred Dreyfus. Dreyfus was a Jewish military officer in the French army, falsely accused and convicted of spying for Germany. Even after the error was discovered, the government refused to back down and let Dreyfus rot away on Devil’s Island rather than admit to the mistake. It wasn’t until 1906, 12 years after the wrongful conviction, that Dreyfus was freed and reinstated, largely due to the advocacy of Emile Zola.

5. Cornucopia HORN OF PLENTY
The Horn of Plenty is a symbol of abundance that has been used in Western art since the days of antiquity. The Horn of Plenty is usually depicted as a horn-shaped vessel containing flowers and edible delights, and may also be called the “cornucopia”.

11. Yosemite monolith popular with rock climbers EL CAPITAN
El Capitan is a stunning vertical rock formation in Yosemite National Park in California. The top of El Capitan has been used as the take-off point for many BASE jumps, parachute jumps made by diving off the top of the rock face. The National Park Service put a stop to the practise in 1999. Soon after, a BASE jumper made an illegal jump to protest the ban. She died …

26. Black-and-white cookies OREOS
There is an “official” competition involving Oreo cookies, in case anyone is interested in participating. A competitor has to take several steps to finish an OREO Lick Race:

30. Ancient storyteller AESOP
Aesop is remembered today for his famous fables. Aesop lived in Ancient Greece, probably around the sixth century BC. Supposedly he was born a slave, somehow became a free man, but then met with a sorry end. Aesop was sent to the city of Delphi on a diplomatic mission but instead insulted the Delphians. He was tried on a trumped-up charge of stealing from a temple, sentenced to death and was thrown off a cliff.

33. Fed. agents G-MEN
The nickname “G-men” is short for “Government Men” and refers to agents of the Federal Bureau of Investigation.

38. 1995 Reform Party founder PEROT
The Reform Party of the USA was founded in 1995 by Ross Perot with the intent of creating an alternative to the Republican and Democratic Parties. The Reform Party’s biggest success was the election of Jesse Ventura as Governor of Minnesota.

Henry Ross Perot graduated from the US Naval Academy in 1953, as president of his class. Ross Perot served his 4-year commitment but then resigned his commission, apparently having become somewhat disillusioned with the navy. He was ranked number 101 on the Forbes 400 List of Richest Americans in 2012, and at that time was worth about $3.5 billion.

43. Singer Reed LOU
Lou Reed was best known as a rock musician and songwriter, and was especially associated with the fabulous 1973 hit “Walk on the Wildside”. Reed is less well known as a photographer, but he published two collections of his work. The first was released in 2003 under the title “Emotions in Action”, and the second in 2006 called “Lou Reed’s New York”. Reed passed away in 2013.

51. Punctuation mark in large numbers COMMA
In English-speaking countries, we tend to use commas in large numbers, to separate each group of three digits in front of the decimal point (if used). This practise is rarely used in most continental European countries, where the comma is used in place of our decimal point. Instead, groups of three digits are separated by spaces, or sometimes by periods.

55. Tennis great Lendl IVAN
Ivan Lendl is a former professional tennis player from Czechoslovakia. Lendl appeared in eight consecutive US Open finals in the eighties, a record that stands to this day.

57. Out of the wind ALEE
“Alee” is the direction away from the wind. If a sailor points into the wind, he or she is pointing “aweather”.

59. Like an easy job, slangily CUSH
Our term “cushy”, meaning “easy and profitable”, is actually Anglo-Indian slang coming from the Hindi word “khush”, which translates as “pleasant, happy”.

63. Southern Cal. airport LAX
Los Angeles International Airport is the sixth busiest airport in the world in terms of passenger traffic, and the busiest here on the West Coast of the US. The airport was opened in 1930 as Mines Field and was renamed to Los Angeles Airport in 1941. On the airport property is the iconic white structure that resembles a flying saucer. This is called the Theme Building and I believe it is mainly used as a restaurant and observation deck for the public. The airport used to be identified by the letters “LA”, but when the aviation industry went to a three-letter standard for airport identification, this was changed to “LAX”. Apparently the “X” has no significant meaning.