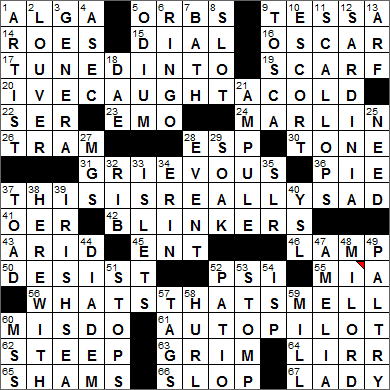 CROSSWORD SETTER: Jeffrey Wechsler
THEME: Sniff … each of our themed answers today is clued with a [sniff], with the answer being what one might say on making that [sniff].

Today’s Wiki-est, Amazonian Googlies
Across
1. Bit of plankton ALGA
Plankton are organisms that float in water and are incapable of swimming against a current. There are three general classifications of plankton:

– Phytoplankton, which live on the surface and use light for photosynthesis.
– Zooplankton, small animals that mainly feed on other plankton.
– Bacterioplankton, the bacterial component of plankton.

5. Venus and Mars ORBS
The planet Venus is the second brightest object in the night sky, after our Moon.

9. Actress Thompson of “Veronica Mars” TESSA
Tessa Thompson is an actress from Los Angeles who is known for playing the supporting role of Jackie Cook on the TV show “Veronica Mars”, and for playing student leader Diane Nash in the 2014 film “Selma”.

14. Small deer ROES
Roe deer are found mainly in Europe. They would be the deer shown on television and in movies when Robin Hood was out hunting in Sherwood Forest.

16. Coveted annual honor OSCAR
The Academy of Motion Picture Arts and Sciences (AMPAS) is the organization that gives the annual Academy Awards also known as the “Oscars”. The root of the name “Oscar” is hotly debated, but what is agreed is that the award was officially named “Oscar” in 1939. The first Academy Awards were presented at a brunch in 1929 with an audience of just 29 people. The Awards ceremony is a slightly bigger event these days …

19. Caroler’s wear, often SCARF
The word “carol” came into English via the Old French word “carole”, which was a “dance in a ring”. When “carol” made it into English, about 1300 AD, the term was used to describe a dance as well as a joyful song. Around 1500 AD, carols that were sung came to be associated with Christmas.

20. [sniff] I’VE CAUGHT A COLD
The common cold is caused by a viral infection of the upper respiratory tract. There are over 200 strains of virus that are known to cause the disease.

23. Expressive music genre EMO
The musical genre of “emo” originated in Washington D.C. in the 80s, and takes its name from “emotional hardcore”. “Emo” is also the name given to the associated subculture. Not my cup of tea …

24. Sport fishing quarry MARLIN
The fish called a marlin takes its name from the sailor’s took called a marlinspike. The long nose of the marlin might indeed be described as a “spike”. A marlinspike is used by sailors when working with rope, untying knots or perhaps splicing. The name of the tool comes from the practice of “marling”, which is the winding of twine around the ends of a larger piece of rope to prevent it from unravelling.

26. Way around London TRAM
A tram is a means of public transportation that runs on rails laid along the length of streets in cities and towns. Trams might also be referred to as trolleys or streetcars.

Trams were a common form of transport in London starting with horse-drawn versions in 1860. Trams were gradually replaced by diesel buses after WWII, with the last tram running in 1952. Even though the trams disappeared in the early fifties, many of the rails that carried the trams remained in some streets for many years afterwards (I remember them well as a child). A new generation of tram, a so-called light-rail system, was introduced in London in 2000.

36. Shepherd’s __ PIE
Shepherd’s pie, also known as cottage pie, is one of my favorite dishes. It is a meat pie (although my wife makes a vegetarian version), with a crust made from mashed potato.

41. “Jingle Bells” contraction O’ER
The traditional Christmas song “Jingle Bells” was first published in 1857, penned by James Lord Pierpont. We associate the song with Christmas, although in fact Pierpont wrote it as a celebration of Thanksgiving.

42. Some road signals BLINKERS
A car’s turn signals are more formally referred to as “directional indicators”, and indeed in Ireland we usually just called them “indicators”. Other casual terms used here in North America seem to be “blinkers” and “flashers”.

45. Otoscope user, for short ENT
An otoscope is that instrument that an Ear, Nose and Throat specialist (ENT) uses to look into the interior of your ears.

46. Hurricane __ LAMP
A hurricane lamp is a kerosene lantern that is portable and designed for outdoor use.

52. Inflation meas. PSI
Pounds per square inch (PSI) is a measure of pressure.

67. Cocker spaniel of film LADY
“Lady and the Tramp” is a classic animated feature from Walt Disney, released in 1955. Who can forget the scene where the Tramp and Lady are “on a date” and together eat that one strand of spaghetti? So cute!

The Cocker Spaniel originated in the UK, where the breed was developed for hunting the Eurasian Woodcock. It is the hunting of the woodcock that led to the breed’s name.

Down
3. Canis and Felis GENERA
Biological classification is a method used to group organisms by biological type. The method uses a hierarchy of nested classes, with an organism being classified with reference to evolutionary traits. The major taxonomic ranks used are:

The genus Felis includes the domestic cat and other small, wild cats. The Latin word for “cat” is “feles”.

5. Disgust ODIUM
“Odium” is a strong dislike or aversion. The term is Latin in origin and relates to the Latin word “odi” meaning “I hate”.

7. Bad thing to take in Vegas? BATH
In old gambling slang, if you lost all of your money you were “cleaned out”. This expression evolved into the phrase “to take a bath”, meaning “to lose everything”.

8. Pinball machine feature SLOT
Our modern game of pinball evolved from an earlier table game called bagatelle which used balls, pins and holes (and I remember playing bagatelle as boy in a pub in Ireland). The first “pinball” machine was made by a British inventor who settled in Cincinnati, Ohio. He modified the game of bagatelle, adding a coiled spring and a plunger to introduce balls at the end of the table, a device that is still in use today. From there, manufacturers developed coin-operated versions of pinball, which became popular during the depression as they provided a little entertainment for a few pennies. One distributor of the coin-operated pinball machines started manufacturing them himself as he couldn’t source new games fast enough. He called his pinball game Ballyhoo, and eventually named his company Bally, a brand name well known in the gambling industry to this day.

9. 1900 Teatro Costanzi premiere TOSCA
Unlike so many operas, “Tosca” was a big hit right from day one, when it was first performed in 1900 at the Teatro Costanzi in Rome. “Tosca” is currently the eighth-most performed opera in America, although I’ve only seen it once myself.

11. Food often served seared SCALLOPS
A scallop is a marine mollusk that is served as seafood. Scallops are often served baked in milk and this method of preparation has become known as “scalloping”. So, scalloped potatoes are potatoes baked in milk.

18. Actor Daniel __ Kim DAE
Daniel Dae Kim is an American actor who is famous for playing Jin-Soo Kwon on “Lost”. Kim now plays one of the leads on the CBS remake of “Hawaii Five-O”, portraying the character Chin Ho Kelly.

21. Pharmaceutical container AMPULE
An ampule is a sealed vial that is commonly used to hold pharmaceuticals. Ampoules are usually made from glass, and are opened by snapping off the neck of the container.

27. Classic two-seated roadsters MGS
My neighbor used to keep his MG Midget roadster in my garage (away from his kids!) back in Ireland many moons ago. The Midget was produced by MG division of the British Motor Corporation from 1961 to 1979, with the MG acronym standing for “Morris Garages”.

33. The Skerries in the 39-Down, e.g. ISLETS
The Skerries are a group of islets of the coast of Wales in the Irish Sea. “Skerry” is mainly a Scottish word meaning “small, rocky island”. There’s a lot of SCUBA diving around the Skerries as they were the site of many shipwrecks over the centuries. Because of the dangerous landfall, there has been a Skerries Lighthouse on the largest island since 1716. I remember that lighthouse as a welcome sight when crossing the Irish Sea in my sailing days, many, many moons ago …

35. Camera shop offering, briefly SLR
SLR stands for “single lens reflex”. Usually cameras with changeable lenses are the SLR type. The main feature of an SLR is that a mirror reflects the image seen through the lens out through the viewfinder, so that the photographer sees exactly what the lens sees. The mirror moves out of the way as the picture is taken, and the image that comes through the lens falls onto unexposed film, or nowadays onto a digital sensor.

39. View from Liverpool IRISH SEA
Liverpool is a large port city in the northwest of England, located on the estuary of the River Mersey. With a sense of humor that is typical of the area, people from Liverpool are often called “Liverpudlians”. The term comes from the jocular “Liver-puddle”, a diminutive of “Liver-pool”.

40. Fashion monogram YSL
Yves Saint-Laurent was a French fashion designer, actually born in Algeria. Saint-Laurent started off working as an assistant to Christian Dior at the age of 17. Dior died just four years later, and as a very young man Saint-Laurent was named head of the House of Dior. However, in 1950 Saint-Laurent was conscripted into the French Army and ended up in a military hospital after suffering a mental breakdown from the hazing inflicted on him by his fellow soldiers. His treatment included electroshock therapy and administration of sedatives and psychoactive drugs. He was released from prison, managed to pull his life back together and started his own fashion house. A remarkable story …

44. Crown jewels item DIADEM
A diadem is a type of crown that is worn as a sign of royalty. The original “diadem” wasn’t made of metal and was simply an embroidered silk ribbon that was worn by a king as a symbol of his authority.

47. First name in aviation history AMELIA
Amelia Earhart is as famous today as she was during her lifetime. When she became the first woman to fly solo across the Atlantic she was awarded the Distinguished Flying Cross by Congress, and the Cross of Knight of the Legion of Honor by the French government. She made two attempts to circumnavigate the globe by air (not solo). Her first attempt in March 1937 had to be abandoned when her aircraft was damaged during takeoff. The second attempt in June/July of the same year ended when Earhart and her navigator disappeared flying from Lae, New Guinea to Howland Island in the Central Pacific.

54. NetZero, e.g.: Abbr. ISP
NetZero was launched in 1998 and was the first free Internet Service Provider (ISP). NetZero’s idea was to provide targeted advertising to users, based on what users liked to view online. It’s a little like Google’s business model, providing advertising based on Internet surfing patterns.